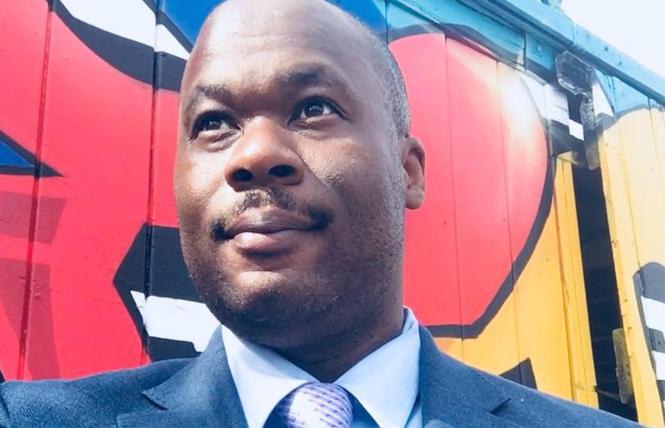 To create a state Democratic Party that feels inclusive, new representatives in our leadership must illustrate that they understand the consequences of a party that does not include the voices and experiences of those who have known hardship and disparities.

That's why I am running as a state party delegate this weekend. If you're a registered Democrat in San Francisco's 17th Assembly District, I ask for your vote Saturday, January 12.

Our politics, policies, and resolutions have a tremendous effect on our most vulnerable people in society and we rarely see that they have a seat at the table, and seem to have no place within our platform.

For our Democratic Party to truly be the "party of the people" we must stop expecting to receive support from minorities or disadvantaged communities that we don't often engage, except when we want to win.

In 2016, several prominent attendees at the Congressional Progressive Caucus' annual retreat concluded that "the Democratic Party has a race problem." I believe it also has problems with class and social and economic privilege.

Let's face it, it is economically out of reach for most people to be active within Democratic Party leadership.

I can draw from my own experiences on these issues, as recently as our San Francisco Assembly District delegate elections in 2017 and in 2015, when I narrowly won a seat while facing eviction.

Our local party leaders and those hoping to become elected to the state party as delegates organized slates. Whether on a slate or running independently I have represented those of us who know real-life hardship and real-life disparities as to bring their voice and our experience to the table.

From my perspective, and after several disappointing conversations, I saw problems around issues in political vision, excluding those who understand issues like poverty, homelessness, gentrification, racism, social and economic inequity and who actively organize to address these systemic issues. I felt that was wrong.

These issues are not fun to discuss but are vital to overcoming the deep-seated problems in our city and society as we continue to see disturbing trends in racism, classism, and sexism in our electoral politics, policy-making, and in our culture across the country.

If we are to become more inclusive and achieve true party unity we must work together to take steps to address them head-on, and I am proud that such efforts are the cornerstone of my work.

As a San Francisco native, gay, African-American man with cultural and genetic heritage connected to Indigenous and Haitian ancestry and Islamic heritage represented throughout my family, I have become vocal on these issues as they present themselves in how our party operates, sometimes in contrast to our stated values.

My history of overcoming hardship includes displacement from jobs through workplace discrimination and displacement from my housing through economic instability created by a society that treats its workers unjustly. These are some of the issues that I seek to work on within our Democratic Party. My political vision of change is rooted in addressing these kinds of hardships.

The leadership structures of our party are out of reach to the new "average citizen." The rent is too high, people have to work several jobs, and some of us can't afford the cost associated with being in our party leadership. But our voice must be heard.

When and where it counts, we know that major decisions that affect our lives are being made by a chosen few who, by comparison, often enjoy very privileged life experiences and who may have never experienced hardship or disparity.

The growing majority has. We learned that a growing number of people in our country may not have cared to vote because they believe our system isn't built to include them. It is apparent in our voting trends who we are leaving behind and we must change that.

Our systems are indeed built around individuals with economic privilege and access. The pattern of disillusionment for all others is because of the inequity that this causes in policy decisions and representation.

If we want to grow our party, we must evolve to include and value less-privileged life experiences in our party leadership and platform. These representatives will be well suited to help us refocus our outreach efforts. These representatives will also be able to engage deeper into neglected communities because they know what neglect feels like and how it damages our communities. This is the work.