Jock Talk: Hellos and farewells from 2018 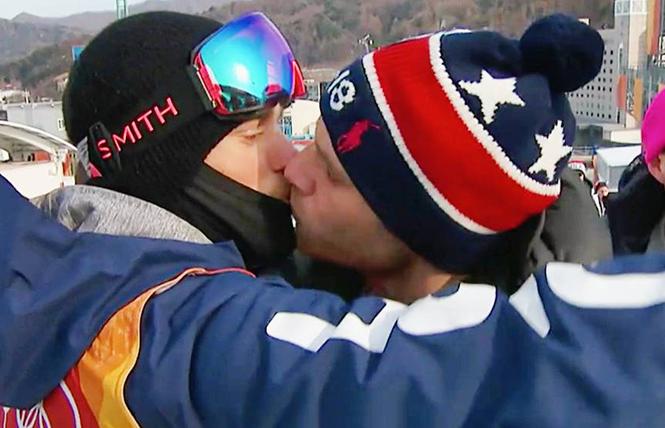 It was the year of the rebound for the Gay Games and, to a lesser degree, the Sin City Classic. In the first post-World Outgames year in more than a decade, a lawsuit against the Outgames was dropped presumably because of a lack of assets by the misconceived event's organizers, but both the Gay Games and Sin City Classic flourished with rejuvenated vitality, with 10,000 athletes gathering in Paris for the biggest Gay Games since 2006, and Sin City shaking off its own legal entanglements to continue its role as the premier go-to mid-winter LGBT sports event. A decade ago athletes were complaining that the birth of the Outgames was causing "tournament fatigue" and overcrowding the global LGBT sports calendar. Now they are running and creating more national and international events than ever before.

It was the year of the kiss — finally. In 2008, NBC had blown its chance to show gold medalist Matthew Mitcham kissing his boyfriend after his winning dive at the Beijing Olympics. In 2014, gay NFL prospect Michael Sam was shown kissing his boyfriend after being selected in the later rounds of the draft, but that was on cable's ESPN, not one of the major broadcast networks. This time, when freestyle skier Gus Kenworthy saw his boyfriend at the start of his competition in the Winter Olympics in South Korea, he planted a long kiss on him. This time, NBC broadcast it.

"To be able to do that, to give him a kiss, to have that affection broadcast to the world, is incredible," Kenworthy said afterward. "The only way to really change perceptions, to break down barriers, break down homophobia, is through representation. That's definitely not something I had as a kid. I never saw a gay athlete kissing their boyfriend at the Olympics. I think if I had, it would've made it easier for me."

It was the year of pseudoscience. The International Association of Athletics Federations continued its racist war against intersex athletes after losing its case against Indian sprinter Dutee Chand by proposing new rules blocking athletes with specified natural high testosterone levels in cherry-picked events. These events show no scientific correlation between testosterone levels and race results but do happen to be the ones in which South Africa's Caster Semenya runs. Currently the rules are being put on hold while more (i.e., any) evidence to support them is gathered, but if they are reinstated it will be just before the world championships — too late for intersex athletes to artificially alter their bodies to conform to qualify.

It was the year of testimony. Hundreds of female athletes gave hour after hour of testimony, day after day, recounting how former U.S. gymnastics trainer and team doctor Larry Nassar sexually abused them again and again during their time on the national team or at Michigan State. They testified about the times they had spoken out and had been ignored or silenced. About the psychological wounds that endured long after they had escaped the slimy predator's ubiquitous grasp. It was the biggest boulder tumbling to earth as the wall of secrecy surrounding the insular, enabling practices of the NCAA and the Olympic movement cracked. We enter the new year with promises of reform and new leadership — and worries that some things never change.

It was the year of the marriage. In November, former Dallas Cowboys linebacker Jeff Rohrer married his partner of two years, Joshua Ross. There have been few NFL players to have come out of the closet since David Kopay did in the mid-1970s and none of them had publicly acknowledged marrying a man. What a younger generation may take for granted an older generation thought was inconceivable — but that was also the generation that worked to make it possible.

It was the year we said goodbye to longtime Gay Games activist Paul Mart at the age of 100. He died late in the year and was laid to rest in a military service in southern California in December. The Gay Games and the volunteer work behind it will never be quite the same.

It was a year in which Oakland began to say goodbye to the Warriors (who are moving to San Francisco) and the Raiders (leaving for Vegas). It was a year national participation in football continued to decline because of public disgust and apprehensions.

Lastly, it was the year a band of international activists walked through Russian cities during the World Cup wearing team jerseys whose colors, taken together, formed a not-so-hidden flag of pride — a living, breathing symbol that we will not be silenced, that we shall not vanish, that we shall survive and thrive.

It was a much-needed sign that in the end, we will not be defined by the obstacles or enemies we face, but the way in which we face them.