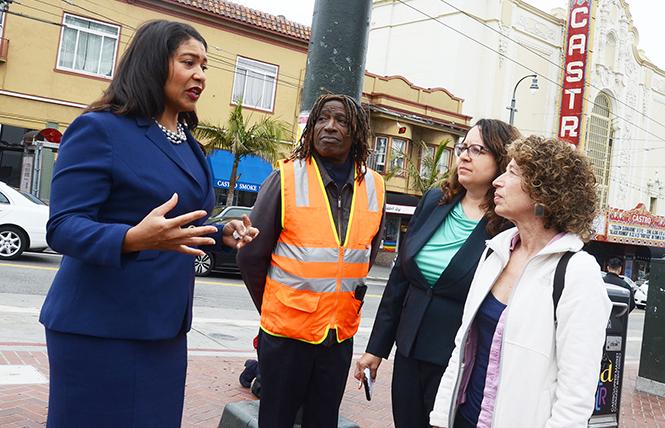 When she ran in the spring to be elected mayor of San Francisco, London Breed listed a number of LGBT priorities that she planned to focus on should she be elected to Room 200 at City Hall.

She called for building a homeless shelter dedicated to the needs of LGBTQ youth where they could access myriad services to assist them in moving off the streets and into permanent housing.

Breed, at the time the board president and District 5 supervisor representing the Western Addition and the Haight, also pledged to improve unsafe conditions in single-room-occupancy hotels. Many LGBT residents, in particular transgender individuals, call the buildings home.

Another priority Breed named should she become mayor was improving the safety of LGBTQ seniors in city shelters. To do so, she promised to provide LGBTQ-targeted services and cultural competency training for shelter staff.

And she said she would be open to expanding the role of her mayoral adviser on transgender issues into a position focused on a wide array of LGBT initiatives.

Six months after becoming the first African-American woman elected mayor of the city, Breed is working to fulfill her LGBT campaign promises. During a recent editorial board meeting with the Bay Area Reporter, Breed laid out several steps she and her administration have taken since her July swearing in to address the needs of the city's LGBT community.

"That's really what I am here for, is to work on the challenges we have here in San Francisco to make San Francisco a better city for each and every one of us," said Breed, 44, who briefly served as acting mayor following the death of the late mayor Ed Lee last December due to her being board president.

(Her board colleagues in January voted to replace Breed as mayor with former District 2 supervisor Mark Farrell, saying they did not want someone running in the special election triggered by Lee's sudden death to serve in the position. Breed went on to defeat gay former state lawmaker and city supervisor Mark Leno, outgoing District 6 Supervisor Jane Kim, and several other candidates in the June contest.)

During her first 169 days in office Breed has several LGBT accomplishments to point to, most recently declaring the San Francisco Lesbian/Gay Freedom Band the city's official band at the request of gay District 8 Supervisor Rafael Mandelman. Last month she flew the transgender flag at City Hall for the first time and declared November as Transgender Awareness Month.

In October, Breed issued a directive ordering city agencies and departments to expand the gender options on their intake forms to include the option of nonbinary in addition to male and female. It also required there be gender-neutral options for titles and pronouns and a line allowing people to list their chosen name.

She also that month declined an invite to attend a U.S. Conference of Mayors event in Alabama due to the state being on the city's banned travel list for having anti-LGBT laws on its books. It came as Breed faced criticism for not publicly denouncing a school board candidate she had endorsed who suspended her campaign after her past transphobic comments resurfaced.

Overall, Breed said that her time as mayor "has not only been a whirlwind but it's been, so far, the time of my life."

Campaign promises works in progress
As for her campaign promises on LGBT issues, most are still works in progress or have been altered due to budgetary constraints or other concerns. For instance, rather than open a freestanding LGBT youth homeless shelter, Breed is aiming to open a Navigation Center focused on housing all transitional age youth, 18 to 24, no matter their sexual orientation or gender identity.

"We are in the process of trying to identify a location," said Breed, adding that her "preference is to find, at this point, any location that we could possibly get in the city. As you know the challenges of opening shelters and Navigation Centers it's really hard."

Her spokesman, Jeff Cretan, told the B.A.R. that the city has already allocated $1 million toward the facility and will increase its ongoing funding to $3.4 million starting in the next fiscal year, which begins July 1.

"There will be services for LGBT and trans youth as a part of it," he explained, adding that dedicating some of the beds for trans youth is under discussion.

Clair Farley, director of the transgender office, added that agencies that serve LGBT youth, such as the LGBT Community Center, Larkin Street Youth Services, and LYRIC, short for the Lavender Youth Recreation and Information Center, would be able to be on site at the shelter to provide assistance to the youth.

"And so the Navigation Center would act as kind of another place where there is a hub of services where all these organizations that are working in collaborative could really work together with HSH to best identify how do we get younger people off the streets," said Farley, referring to the city's Department of Homelessness and Supportive Housing.

As for creating a shelter specifically for transgender homeless individuals, Breed did not rule it out. The city already funds Jazzie's Place, a 24-bed shelter for LGBT adults, but there is a waiting list to be assigned one of the beds.

"I think that what we are looking at is one specifically for the trans community and delivering services and resources," said Breed.

Yet the mayor didn't allocate any of the $181 million windfall the city is receiving in a one-time infusion of funding toward a transgender or LGBT homeless shelter when she announced last Thursday her plan for spending the funds. She has proposed using $56 million for temporary shelter and treatment programs, including $27 million for a new 200-bed Shelter Access For Everyone (SAFE) emergency homeless shelter.

"It is still fluid. Things could change but not currently," said Cretan, who told the B.A.R. after the funding proposal was announced that a transgender shelter "is something we could look at in the future."

As for inspecting the city's SROs, Breed said the issue of ensuring the facilities are livable doesn't just affect LGBT residents but all tenants in the buildings.

"We are working with DBI to prioritize inspections and address the issues with those buildings in general," said Breed, referring to the Department of Building Inspection. "I have not differentiated one population versus the other. I am just working on making sure these buildings are in good repair."

Tackling the concerns LGBT people have expressed about how they are treated in the city's shelters is furthest along in terms of being accomplished. The Mayor's Office of Transgender Initiatives and the Mayor's Office of Housing and Community Development received a two-year grant at $200,000 per year to evaluate the shelters.

To help with the work, the offices awarded the funding to the Trans Activists for Justice and Accountability Coalition, known as TAJA's Coalition and named after a transgender woman killed in 2015. (Under a subcontract with the grant, EL/LA Para Trans Latina is receiving $50,000 annually to support violence prevention programming.)

The group has been tasked to "do some evaluation of the existing shelter programs in terms of access to the trans community to better understand what the community needs as well as to better train providers in terms of trans inclusion," explained Farley. "So we are really hoping to use that feedback from the community to support the initiatives that the mayor is spearheading so that the resources really help the community."

"I am hoping we can work through this TAJA grant to travel to all of the shelter sites to do training," said Farley. "So my team will be working closely with the organization because this is a top priority of mine and the mayor's to make sure our community feels safe in accessing our services, and it is only through that we will be able to determine where the gaps are."

The goal, said Farley, is to ensure "if anyone was to access these services they will feel safe."

Asked about retooling Farley's position into overseeing a broader office on LGBT initiatives, similar to what Santa Clara County has created, Breed expressed some hesitancy about doing so. A draft version of the planning department's LGBTQ+ Cultural Heritage Strategy, which should be adopted by the city in early 2019, proposes that the office's prerogative be expanded, as the B.A.R. first reported in September. (See story, page 2.)

There has been some talk of moving the LGBT committee tasked with advising the city's Human Rights Commission over to Farley's office, which is housed in the LGBT center. That advisory body, however, has only met five times in the last two years, as the B.A.R. reported in November, and Breed is looking at other ideas for how to make it more effective. (See story, page 1.)

Despite her narrow job title, Farley already has been working on a number of issues that impact the larger LGBT community and not just transgender individuals, as Breed noted. But at the end of the day both Farley and Breed want to ensure that the main focus of the office is addressing the specific needs of the trans community, which is disproportionately impacted by discrimination, joblessness, and housing instability.

"In fact, Clair's been working on a number of initiatives and always inclusive of all members of the LGBT community," said Breed. "But, I think that the reason why this office was created in the first place is because, I think, the trans community really felt as if they were oftentimes getting left out of the services and the support and just were forgotten in the process of advocacy for things that mattered to them that in some instances might be different from what matters to the larger group as a whole."

Breed stressed that she doesn't "want the office to get away from its ultimate mission of what it is there to do and start to, you know, fold in additional things to do without additional resources associated with that."

Nonetheless, Breed said she was open to hearing people's suggestions on how the city can best meet the needs of the LGBT community.

"But I am also just really open to ideas of what people may want to see for the purposes of, you know, just making sure that we are delivering on the promises that we are making that are important to our LGBT community as a whole," she said.