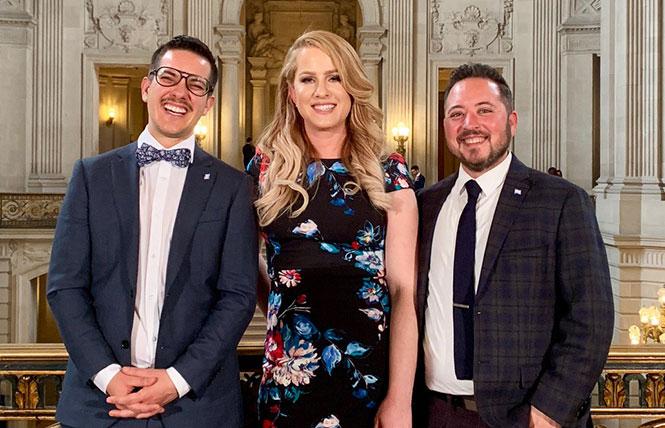 San Francisco's Office of Transgender Initiatives had a big year in 2018 establishing the Transgender Advisory Committee, making recommendations to the mayor, and responding to federal attacks against the community. For 2019, it has even more on its plate and is rolling out new projects.

The office's three full-time staff members spoke to the Bay Area Reporter about next year's priorities, which include an expansion of professional development services for trans individuals, the roll out of an economic fellowship pilot program for transgender immigrants, and an official TAC advocacy day, among other things.

The trans office was launched two years ago by the late mayor Ed Lee and is believed to be the first such municipal office of its kind. A significant day for the office in 2018 was last month when Mayor London Breed declared November Transgender Awareness Month in San Francisco. Earlier that week, the 13-member TAC, which was established in April, met with Breed for the first time to lay out its recommendations.

"That was a huge first in allowing trans community members to have a seat at the table and address these issues and having them be heard," said Maceo Persson, a queer trans man who is civic engagement and operations manager at the office.

With a solid year behind them, the team is hoping to have an even stronger one coming up. One responsibility of the office next year will be aiding other city departments to adhere to Breed's recent directive that ordered all city agencies and departments that collect demographic data to include the option of nonbinary on all forms. This will be a major undertaking for the office come 2019, Persson said.

Clair Farley, a trans woman who's director of the Office of Transgender Initiatives, told the B.A.R. that the total city grants for "important" city programs is close to $2.5 million this year.

One of the biggest priorities of both TAC and the office will be finding ways to secure and expand housing services for the trans community.

"We find that housing continues to be the number one barrier for the community," said Farley. "One in every five trans people are homeless. We want to make sure our office is prioritizing this and want to make sure to connect people to resources that are safe."

An aspect of this includes working with Trans Activists for Justice and Accountability, or TAJA's Coalition, a nonprofit dedicated to providing trans-specific services and fighting for trans rights. The coalition received a two-year $150,000 grant from the Mayor's Office of Housing and Community Development. A portion of the grant will be dedicated to surveying local homeless shelters, Navigation Centers, and single-room-occupancy hotels to better understand how they are serving the trans community and to identify gaps in services.

"We are looking at individual access around making the shelters more accessible, bathroom access, shower facilities, and how to engage other shelters and make sure there are resources available," Farley said.

The information from the survey will help inform training sessions for shelter staff. Just a few weeks ago, about 40 employees from various shelters and Navigation Centers gathered at the San Francisco Public Library for general cultural competency training, led by Farley's office.

Danielle Castro, board chair of TAJA's Coalition, said grants like these are vital in mitigating trans homelessness and getting trans people into safe housing options. The coalition is named after a transgender woman killed in 2015.

"It's really important to have services for the trans community especially because of the level of violence that we face and the barriers that exist to accessing social services including safe housing," said Castro, who identifies as a trans person. In terms of housing, the trans office will also focus next year on additional stipends and rental subsidies for trans-specific housing.

Other priorities
Other items on the office's plate include an expansion of workforce development programming for trans people in the Tenderloin and South of Market neighborhoods, which will roll out in July. The trans office, partnering with the city's Office of Economic and Workforce Development, was awarded $160,000 from add-back funds for one year. The funds will expand services already provided by the San Francisco LGBT Community Center, TGI Justice Project, and the San Francisco Community Health Center's Polk Street office.

"When you look at the history of the Tenderloin and SOMA, the trans community doesn't have access to pathways to economic development and self sufficiency," Farley said. "We want to provide pathways to jobs and provide life skills for trans individuals to reach their goals, whether that's going back to school or transitioning to a new job." The expansion is expected to serve 150 trans people who will receive one-on-one help.

Another way the office is supporting workforce development is through a pilot economic fellowship program for transgender immigrants. In January, the office will welcome three fellows who will participate in the 21-week program. The idea is for them to develop professional skills through placement with local nonprofits. The office is collaborating with the city's Office of Civic Engagement and Immigrant Affairs on the program.

"We will work with them to create individual work plans to help accomplish their goals," Pau Crego, a trans person who's director of policy and programs at the trans office, said. "LGBT immigrants face unique barriers, language barriers and navigating a new employment system that they didn't have access to in their past countries of origin."

The fellows were recruited in partnership with El/La Para TransLatinas, a San Francisco nonprofit dedicated to advocating for transgender Latinas' rights and providing the community services. All three of the fellows will attend English as a Second Language courses at City College of San Francisco. After the fellowship ends, the goal is to connect the fellows to permanent employment. Farley said she hopes to expand the program to 10 fellows for the 2019-2020 fiscal year. During that time, Farley mentioned the possibility of helping guide the fellows in their quest to gain asylum and obtain work authorization if they don't have it.

"One [fellow] wants to develop their own catering business," Crego said. "She will be working at learning English and at the same time working with El/La to develop a business plan to launch that business."

Something that will tie various trans resources together is a trans web portal. The navigation portal would act as a one-stop-shop to connect trans people to housing, workforce, and other trans-related services.

"There are a lot of challenges connecting people to services and follow up, and we are hoping we can create more connection and a tool for organizations to communicate with one another and a simplified one-stop-shop for community members, residents, and organizations to visit," Farley said.

The web portal is in a very preliminary stage, and no start date has been set.

Taking on Trump
The office is also gearing up for its response to attacks on the trans community by President Donald Trump and his administration. An example of this is the Trump administration's recent efforts to strip federal recognition of trans people. The New York Times reported in October that the administration prepared a proposal to limit the identification of a person's gender to include only "male" or "female" that is listed at birth.

Persson said Breed declaring November as Transgender Awareness Month was in direct response to this attack. He also mentioned Trump's signing of a memorandum in May that served as an implementation plan for his policy to ban transgender people from serving openly in the military.

"We are working hard to respond to these attacks and making sure that the country knows San Francisco is a city that doesn't tolerate discrimination and that we support our diverse communities," he said.

A first for the office will be TAC's advocacy day that is planned to take place in conjunction with Transgender Day of Visibility in March. It's a day when TAC will bring transgender community members to City Hall to share their stories with the Board of Supervisors. TAC will also share their community recommendations with the BOS that day.

The office has a big year ahead of them, but they are ready to tackle their goals.

"We have a lot of work ahead of us," Farley said.

Update: 01/02/19: This article has been updated to clarify that future participants of the fellowship program will receive guidance on obtaining asylum and a work authorization if needed. The current fellows have already obtained asylum and have work authorization. Additionally, the Office of Civic Engagement and Immigrant Affairs is collaborating with the trans office on the fellowship program, but not on the web portal.