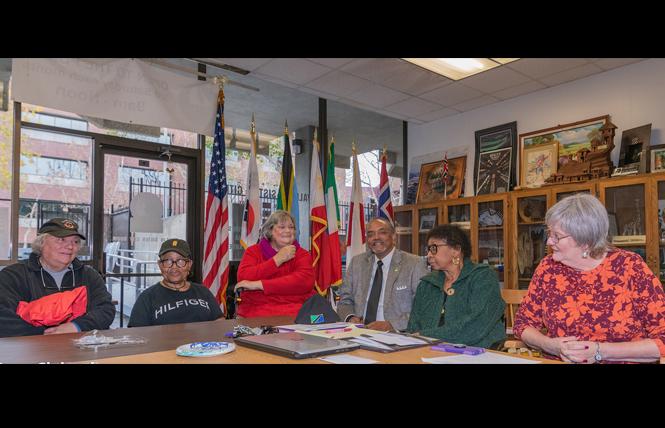 Vallejo LGBT activists and leaders of its sister city commission and association came together earlier this month to figure out responses to November's crackdown on the African country's LGBT community.

Vallejo has a sister city with the Tanzanian port city of Bagamoyo. The cities have enjoyed a strong relationship for 25 years, according to the Vallejo Sister City Association's website.

A handful of community activists and city leaders met recently to talk about the issue.

Vallejo's LGBT community had a contentious relationship with the city's previous mayor, Osby Davis. Davis was religious and homophobic and was quoted in a 2009 New York Times column, "They're committing sin, and that sin will keep them out of heaven. But you don't hate the person. You hate the sin that they commit."

Davis said his comments were taken out of context but the Times published a transcript of the expanded quote.

Bagamoyo is about 47 miles outside of Dar es Salaam, the East African country's capital city. It is a district of the Pwani Region, not a part of Makonda's region.

A group of 10 men was arrested within a week of Makonda's mandate on Zanzibar, a semi-autonomous island region off the coast of Tanzania.

Many LGBT Tanzanians have gone into hiding.

Gay and bisexual men face up to 30 years in prison if charged under Tanzania's colonial era anti-sodomy law.

Due to Tanzania's poor human rights record, Vallejo LGBTs have expressed concern over the years about the relationship with Bagamoyo.

That included a visit by Tanzania's former president, Jakaya Mrisho Kikwete, in 2013 and Davis traveling with a fundamental religious delegation to Tanzania in 2014 (www.ebar.com/news///244278).

Being heard
Vallejo's current Mayor Bob Sampayan is a world apart from Davis.

A human rights advocate, the 66-year-old Filipino mayor is an ally of the East Bay city's LGBT community, which supported his campaigns for city council and mayor, he told the B.A.R.

"Vallejo is one of the most diverse cities in the country," he said, calling any kind of discrimination "absolutely offensive."

Sampayan is opposed to Tanzania's recent crackdown and took his concern directly to Vallejo's Sister City Commission Chairman Pelton Stewart, who heads the seven-member panel. Stewart agreed with the mayor and suggested Bagamoyo's sister city relationship with Vallejo was in jeopardy due to the anti-gay crackdown in the country.

However, Stewart and his colleague, Elissa Shanks Stewart (no relation), president of Vallejo's Sister City Association, are exploring all options, from helping Tanzania with its homophobia to ending its quarter century relationship with Bagamoyo.

The association has an estimated 150 members, said Shanks Stewart.

Sampayan fully supports the possibility of severing the city's long relationship if the human rights violations against LGBT Tanzanians don't stop, he said.

"I don't believe in what Tanzania has done in persecuting the gay community," he said.

"I will support ending that relationship if they do not abide by what we are asking, which is to be accepting of the LGBTQ community," he added. "If they continue to violate human rights, frankly, I don't want that relationship with them."

While Sampayan applauded Stewart and Vallejo's sister city leaders, who have all backed out of a forthcoming trip to Tanzania in 2019, he remains skeptical about their convictions of ending the long relationship over the anti-gay assault upon LGBT Tanzanians.

On December 14, Tanzania's Finance Minister Philip Mpango told officials that the country won't back down from its position not to accept LGBT people, despite donors' encouragement and the country's desperate financial situation.

Stewart, 65, and Shanks Stewart, 70, are reaching out to Vallejo's LGBT community and allies and met with a small group December 5.

"We don't like it. We disagree with it vehemently," Shanks Stewart, whose daughter married her female partner five years ago, told the group.

Stewart explained that they have raised their own concerns about the anti-gay crackdown with Ahmed Issa, consul general of Tanzania in San Francisco; Sister Cities International; United States elected representatives and the U.S. Embassy in Tanzania.

Currently, the U.S. doesn't have an ambassador serving at the embassy in Tanzania, Stewart said.

They are still waiting on responses from the other organizations.

Issa wasn't able to attend the meeting due to other commitments, Stewart explained. He relayed Issa's statement reinforcing Tanzania's official position distancing itself from Makonda's mandate, but that it "isn't the official stance of the country," he said.

Issa didn't respond to a request for comment from the B.A.R. by press time.

Brenda J. Crawford, 71, a lesbian who lives in Vallejo, said she was glad she responded to Stewart's olive branch.

"It is incumbent upon us in the LGBT community to come to the table with people who we might consider our enemy and open up that dialogue and start to bridge that gap so that we can develop a whole community," said Crawford.

"Vallejo is an ideal place to do that because of our diversity," she added. "We want to work with them to get these backward policies addressed in Tanzania,"

Carol Cullum, 73, who attended the meeting with her wife, Kathy Brehm, 74, said that she wanted to work with the sister cities to find a way to "put pressure on the government of Tanzania to stop" the attack on LGBT people.

"I find this atrocious," she said.

The group discussed a number of ways to approach the situation in addition to the delegation that canceled the trip. They discussed presenting Tanzanian officials and Sister Cities International representatives with a position paper.

Other ideas included connecting with LGBT Tanzanians to talk about their experiences with the Vallejo community and hosting a sister cities event celebrating the 50th anniversary of the Stonewall Riots in 2019.

Stewart said that Vallejo doesn't have the financial clout of Denmark or the World Bank, both of which withdrew millions of dollars in financial support to Tanzania in response to the anti-gay crackdown.

"What we have is a voice," said Stewart, who wants to send a message to Tanzania about how serious they are about the anti-gay crackdown and other human rights violations. "We have citizens that are at this table that are hurting and we are not about hurting our citizens.

"That's the little clout that we have [that] we are willing to use," he added.

Pleased with meeting
The LGBT activists were pleased about the discussion. They felt that they were being heard and action was being taken on behalf of LGBT Tanzanians.

"The meeting went incredibly well," said Crawford, acknowledging the change in the sister cities representatives' response to the violence against LGBT Tanzanians and Vallejo's relationship with Bagamoyo.

She was impressed that the entire delegation canceled the trip until they see change in the human rights violations against LGBT people and are considering ending the sister city relationship.

"That's tremendous," said Crawford. "Rather than in the last administration going over there without any regards to the harm they were causing by engaging in any kind of activity with this homophobic, brutal government in Tanzania.

"We are sitting down at the table now talking about [how] this is not acceptable ... so that's progress," she added.

Cullum said she felt positive about the meeting but is realistic about Vallejo's power over a foreign government.

She added that it might take an old fashioned boycott with other sister cities members partnered with Tanzanian cities to end discrimination against LGBT people in the East African nation, similar to the fight to end apartheid in South Africa.

"The best outcome that I would hope for is that the Tanzanian government prohibits discrimination," she said. "I don't think that it's impossible."

UNHCR moves LGBTs from Kenya refuge camp
The United Nations High Commissioner for Refugees last week moved 20 of the 170 LGBTs at the Kakuma refugee camp in Kenya to a safe house in Nairobi.

It's believed that the rest of the 140 LGBT refugees will be moved by the end of the month, reported the Thomas Reuters Foundation.

The Kakuma camp is home to an estimated 180,000 refugees, about 200 of whom self-identify as LGBT. A majority of the LGBT refugees living at the camp come from Uganda. Others are from Burundi, the Democratic Republic of Congo, Ethiopia, South Sudan, and Somalia.

It is one of the largest refugee camps in the world. Overall, there are more than 750 LGBT refugees registered with the UNHCR in Kenya, reported Reuters.

The move comes after the refugees, who have been complaining about not feeling safe due to violent attacks against them for months, decided to march for better living conditions, food, clean water, medical care, education, and security at the camp.

Unidentified onlookers and police attacked an estimated 30 marchers as they walked with their demands to the UNHCR building.

Kakuma camp "does not provide a safe environment for LGBTI refugees and asylum-seekers," said an UNHCR spokeswoman, reported Reuters.

LGBT people face widespread discrimination in Kenya and throughout many parts of Africa. According to the International Lesbian, Gay, Bisexual, Trans and Intersex Association, 33 of the 54 African nations criminalize same-sex relationships.

Kenya doesn't fast-track LGBT refugees under special status. Many languish in the dangerous refugee camps for years waiting for their UNHCR cases to move through the system. At the same time, they aren't legally allowed to work. Many refugees choose to brave their luck outside of the camp by entering sex work in order to survive.

"While UNHCR has undertaken great effort, together with the Kenyan government and partners, the Kakuma complex does not provide a safe environment for LGBTI refugees and asylum-seekers," said a UNHCR spokeswoman about the move.

Gay sex is punishable up to 14 years in jail in Kenya.