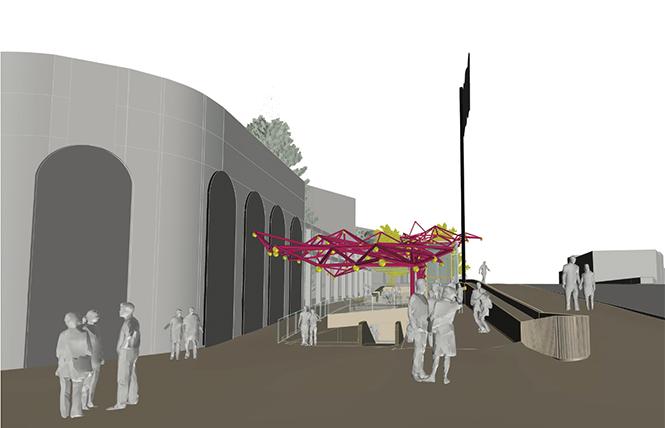 It is meant to be the visual focal point for a redesigned Harvey Milk Plaza above the Castro Muni Station. A sweeping canopy that can be lighted at night to evoke the candlelight march that left from the site the evening its namesake was killed 40 years ago last month.

It could potentially be built in such a way that it includes glass prisms that refract rainbows of light on the surrounding area during the day. It also could potentially host other artwork honoring Milk, whose election to the San Francisco Board of Supervisors in 1977 marked the first time an out gay man won public office in the city and the state of California.

"For us it is very important. We think of this new design as a piece of functional art," explained architect Erich Burkhart, the managing principal of Perkins Eastman's San Francisco office. "It is a very moving and appropriate tribute to Harvey."

He added that their hope is the artwork will become an internationally recognized symbol for not only Milk's legacy but also the city itself.

"The canopy is a little bit fuzzy and a little bit vague because it should be an artist's structure," explained Burkhart.

As the Bay Area Reporter first reported on its website December 13, the firm jettisoned a much derided cantilevered amphitheater in favor of the amorphous canopy structure in hopes of winning the support of the arts commission's civic design review committee. The commissioners had raised objections to the seating plan when they first reviewed the project in October.

At their meeting Monday, December 17, the committee members praised the architectural team for listening to their criticisms of the initial design presented to them. The oversight panel voted 4-0 in support of the new plans but did so after raising a number of issues about the canopy structure.

Of foremost concern is the fact that it is not completely realized, as the architects had planned to seek an artist to flesh out the canopy and design its look. The commissioners strongly advised the architects to take the lead in designing the overhead structure since it is now an integral aspect of their reimagining of the plaza.

"The art canopy becomes the signature so everything becomes dependent on the artist," said Commissioner Paul Woolford, adding that the question of who will design it "becomes critically important for the success of the project."

Arts Commissioner Kimberlee Stryker, who chairs the committee, added that another key question that needs answering is how the Friends of Harvey Milk Plaza group pushing for the remodel of the site will pay for it. The project is estimated to cost at least $17 million.

"The funding needs to be clarified as your next move," said Stryker, warning that the whole design could fall apart if budgetary concerns lead to the canopy being dropped from the plans. "Overall, I think it is a really moving project, a really beautiful project."

The redesign would raise the existing sunken gardens to street level, creating a new belowground exhibit space adjacent to the Muni fair gates where Milk's story could be told. The proposed canopy would start above a new glass protective shield over a rebuilt entrance into the station.

It would then extend over the shaft for a new elevator to be built at the plaza and end in front of a planned grove of 11 ginkgo trees representing each month that Milk held office. The proposal is a long way from being approved by city officials, as the final design requires approval from the full arts commission, the planning commission, transit leaders, and likely the Board of Supervisors.

"This beacon on the hill will be a great symbol for Harvey and our city," he said.

Although he loves the Castro Muni station, Ingu Yun, a gay man who has lived in the city since 1982, said the plaza is due for an overhaul.

"To have it be more inviting seems like a no-brainer to me," he said.

But others disagree and have mounted a campaign to preserve the existing plaza area designed by Howard Grant, who at the time was married to the mother of his children but later came out as gay. He implored the arts commissioners to "respect the architectural integrity of the present vision" for the plaza, which was dedicated to Milk in 1985.

Art historian Paul V. Turner, a former Stanford professor who was friends with Milk and his lover Scott Smith, had objected to the seating area because of it impairing views of the 1922 Beaux-Arts building at 400 Castro Street designed by Edward Foulkes that now houses a SoulCycle. He told the B.A.R. this week that he has similar concerns about the canopy.

"The 'canopy framework' may look light and relatively unobtrusive in the sketch diagram, but as it would actually have to be constructed, it would be as substantial and incompatible with its surroundings as the bleachers, in my opinion," wrote Turner in an emailed reply.

Gay District 8 Supervisor Rafael Mandelman told the B.A.R. that he was pleased to see the arts committee endorse the project. But he continued to stress that the design will continue to "change over time" for the new plaza.

"They are settling on a design that makes more sense," Mandelman said of the current plans.