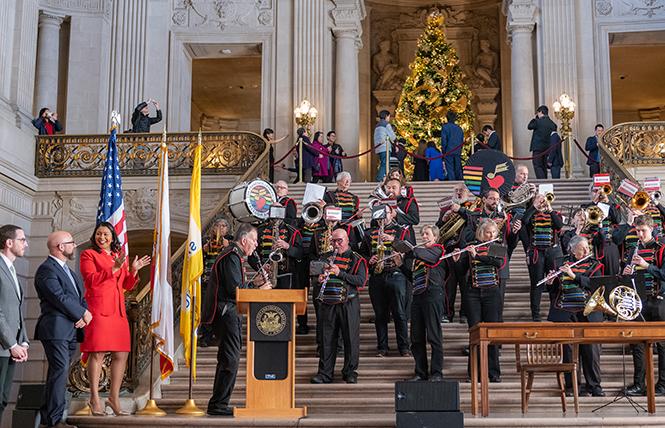 Mayor London Breed, left, claps during a performance by the San Francisco Lesbian/Gay Freedom Band after she signed an ordinance December 18 making it the official band of the city. Photo: Jane Philomen Cleland

Twenty-two members of the 40-year-old band performed on the steps under City Hall's rotunda shortly after Mayor London Breed signed into law the ordinance designating the musical group as the city's official band for perpetuity.

Breed presented the pen she used at the December 18 signing ceremony to gay District 8 Supervisor Rafael Mandelman, who introduced the ordinance on behalf of the band. It was his first piece of legislation to be signed into law since joining the Board of Supervisors in July.

"The arts have played such an important role for the LGBT community and the larger San Francisco community," said Mandelman, noting that the band in particular has helped with "getting us through the tragedies of the last 40 years."

The LGBT band has called itself the city's official band since gay former supervisor Tom Ammiano bestowed the title on it in 1998. But it was only an honorary tribute until this week, as now the city's administrative code will be amended to formally declare the group as the official band of the city and county of San Francisco.

"It is very validating," said Ginnie Padgett, a lesbian who has played trumpet in the band for 10 years.

She first took up the instrument in high school in Baltimore and played through college in Colorado. She then "took 30 years off" until moving to San Francisco two decades ago, and at the urging of a musical teacher, joined the historic LGBT band.

It pegs its first public performance to marching in front of the late gay supervisor Harvey Milk in the 1978 Pride parade. Originally called the San Francisco Gay Freedom Day Marching Band and Twirling Corps, its founder was the late Jon Sims, whose French horn continues to be played by band members and was placed on the desk Breed used to sign Mandelman's legislation.

Padgett said the recognition is especially rewarding since the band "spends so much time bringing music to the city."

It can expect to do even more, as Breed plans to call on the band often to perform.

"We have many events in San Francisco and we will need the official band to be there," she said.