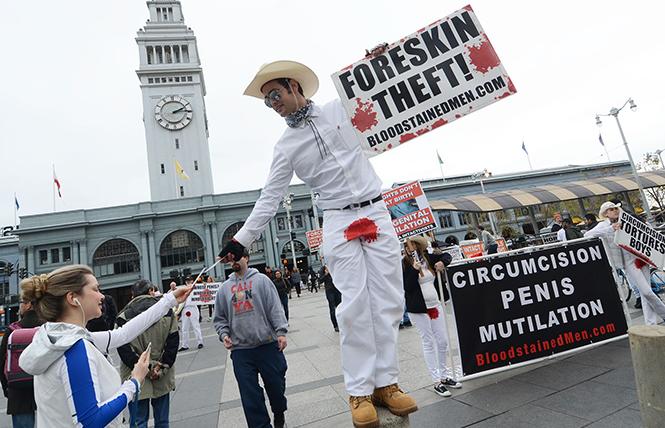 Dominic Barba hands an informational leaflet to a passerby December 15 across from the San Francisco Ferry Building during a demonstration by about 30 activists from Bloodstained Men and Bay Area Intactivists. Photo: Rick Gerharter

The threat of rain did not stop a group of about 30 activists from the organization Bloodstained Men from gathering Saturday afternoon in the plaza across the street from the San Francisco Ferry Building to protest genital mutilation, the circumcision of young children.

Some of the protesters traveled from as far away as Hawaii and Michigan in order to participate in the December 15 action against what they call a human rights violation. Although several women took part in the protest, most of the participants were male. They were dramatically dressed in white, with red stains, meant to represent the bleeding caused by circumcisions, painted on their crotches. The protesters call themselves "intactivists," a combination of the words intact and activist.

According to several of the protesters, the removal of foreskin from the penis not only diminishes sexual pleasure, it causes health issues such as meatal stenosis, the condition of narrowing of the urethral opening causing restricted urine flow. According to intactivist Harry Guiremand, who lives with his husband in Hawaii, this condition can cause a boy to require more painful surgery.

"We are a nonprofit human rights organization focused on the right of everyone to their own body, and that includes males, females, and intersex people," Guiremand told the Bay Area Reporter, referring to Bloodstained Men. "According to the Universal Declaration of Human Rights, Article 3, everyone has the right to life, liberty, and the security of person. Everyone means everyone, there are no exceptions to the most fundamental right to your own body. Most people understand that they have a right to their body and they have the right to assert that right."

Guiremand addressed the religions of Judaism and Islam, which require the circumcision of young boys.

"If you carve your religion onto someone else's body that violates their freedom of religion," he said. "We have to talk about protecting the rights of the vulnerable. The most vulnerable person is an infant, so when it comes to protecting rights, the rights of the infant needs to be given priority over any claimed rights of adults."

As they held up their signage, some passersby stopped to talk, while others walked on.

"I always knew this was wrong," said Lloyd Schofield, a gay man who is a member of Bay Area Intactivists, another anti-circumcision organization. "The more I thought about it and investigated why this was done, the more I was against it. It's holding down another person and mutilating their genitals. It's a very easy concept to understand. Children get it. Like any other human rights violation, you have to be taught to accept it. All children, male, female, and intersex, deserve protection from genital mutilation."

Schofield added that the protest had been getting a mixed, but mainly supportive, response from people. He noted that gay state Senator Scott Wiener (D-San Francisco) passed a nonbinding resolution in the Senate this year to call on the medical community to establish standards of care for intersex children that take into account their human rights.

Tanya Ma flew in from Michigan to participate in the protest.

"I am the mother of an intact 4-year-old son," she said. "I discovered this movement three years ago on social media and I think like them. I always thought circumcision was wrong. This is a huge deal. I see it as a human rights violation and sex organ theft, so I felt the need to be part of this growing movement. Over the course of three years I've collected a dozen books on circumcision and started a YouTube channel talking about circumcision as an intactivist."

Ma said that she could be found on YouTube as MamaTanSwan. She also addressed the religious aspect of circumcision.

"Many Jewish and Muslim families opt out of circumcision," she said. "I connect them to community resources like Beyond the Bris. You can practice religion, but once religion starts to harm another human body it's a human rights violation."

She added that the response she was getting in San Francisco was mixed and included smirks and shocked faces.

The protesters were back on Sunday, in spite of the forecast of heavy rains. Guiremand said that the weekend was chosen because the dates worked out for the group.

The B.A.R. attempted to get comments from people who were walking by, but no one was willing to talk.