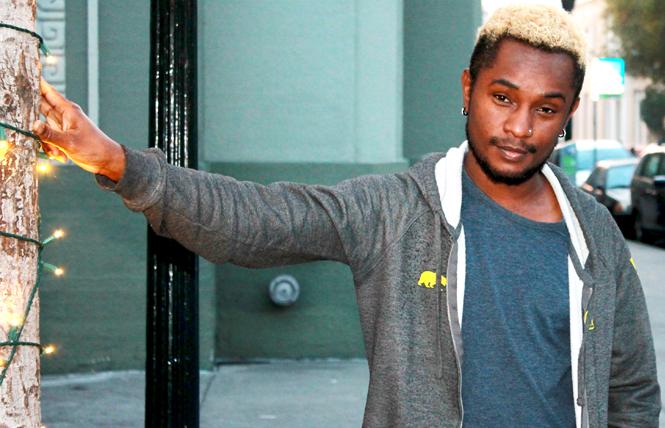 A little more than a month after the latest anti-gay crackdown, LGBT Tanzanians are living underground or have fled the East African country out of fear.

However, some Tanzanian gay activists aren't hiding. They are standing up, ready to speak out against government officials.

"We need to challenge the government to change the laws and policies," gay Tanzanian activist and refugee Geofrey Mashala told the Bay Area Reporter last month.

Mashala, a 34-year-old gay man, has lived in the San Francisco Bay Area since 2016. He returned to the Bay Area on a one-year visa after the government shut down an HIV/AIDS organization he and other LGBTs operated.

"I have nothing to do. It was really terrifying. I was really traumatized," said Mashala, who added that he lost everything in Tanzania.

It was a difficult and scary decision, but the situation was becoming dismal and too dangerous for LGBT people to return to Tanzania, he said. At his host family's insistence, they flew him back to the United States and he eventually decided to stay.

Mashala had already been living in the United States, studying public policy at UC Berkeley under the Mandela Washington Fellowship, which he obtained in 2016 through then-President Barack Obama's Young African Leaders Initiative.

He and another gay Tanzanian activist were selected out of thousands of applicants for the program, he said.

Things began to heat up in Tanzania while Mashala was in the fellowship program. Authorities actively searched for him. Both he and the other activist returned home, secretly crossing over the Kenya-Tanzania boarder to get into the country, where they continued to help their community and advocate for LGBT rights.

"We've got this. We are activists. We don't have to be that scared," Mashala said he told U.S. State Department and White House staff who expressed concern for their safety.

Born in Tanzania's capital city, Dar es Salaam, and raised in the city and Zanzibar, an island off the coast of Tanzania, Mashala doesn't remember when he came out.

Soon after he began a career fighting for LGBT rights.

He worked on HIV/AIDS prevention at the Tanzania Sisi Kwa Foundation before he founded Amka Empowerment, an LGBT rights organization, where he served as director for nearly five years. Amka translated in Swahili means "wake up," he said.

During his work, Mashala said activists identified key issues that needed to be addressed to unlock LGBT rights in Tanzania.

Tanzania has a severe human rights problem, he said, noting it was the main issue blocking LGBT rights in the country. The other major obstacle is the country's colonial era anti-sodomy laws, which are used to criminalize LGBT people.

Without human rights, access to health care, housing, education, and other basic needs can't truly be dealt with, he said.

"If you want to deal with health issues, you should deal with human rights issues at the same time," said Mashala.

Life for LGBT Tanzanians
"The general community of Tanzania [is] very homophobic. It's like you could walk down the street and people will just stone you and the police cannot do anything," said Mashala.

LGBT people face up to 30 years in prison if convicted of sodomy under the country's anti-sodomy law. Homosexuality is socially taboo.

In 2012, fellow Tanzanian gay activist Maurice Mjomba, was brutally murdered in his home.

"He was my best friend. We were so close," he said.

That same year a gay Australian man was found murdered in a similar fashion in the country. The murders put Tanzania's LGBT population on edge.

Gay activists engaged authorities to solve the murders, but the investigations were halted as soon as the police became aware that men who were murdered were gay.

"You cannot go to the police," Mashala said. "You can't get justice because you were beaten because you're gay."

LGBT crackdown
Mashala wasn't surprised by the recent crackdown, he said. Anti-LGBT sentiment, along with harassment, kidnapping, and even suspected killing of journalists has ratcheted up over the past two years.

Paul Makonda, the regional governor of Dar es Salaam, has been one of the most ardent foot soldiers for Tanzania's anti-gay campaign.

The recent crackdown began November 5 after Makonda announced on TV in late October the mass arrest and detention of LGBT people. (http://www.ebar.com/news/news/267923)

Mashala and gay activist James Wandera Ouma, executive director of LGBT Voice Tanzania (https://lgbtvoicetz.org), spoke about several people who have been arrested on the mainland as well as the 10 men who were arrested in Zanzibar last month, which was widely reported.

The men have since been released, but their lives will never be the same, Ouma, who has been arrested 10 times because of his activism, told Global Journalist.

Ouma said that at least one person suspected of being gay has been killed.

Denmark and the World Bank pulled millions of dollars in aid from Tanzania in direct response to the crackdown. 76 Crimes reported that Canada signaled it was considering cutting $125 million in aid to Tanzania.

Faced with financial fallout, Tanzania's government denounced Makonda and the crackdown days after it began.

Mashala applauded Denmark and the World Bank's decision to withdraw funding to Tanzania in direct response to the crackdown and the government restricting pregnant young women from attending school.

"They make us powerful," he said about international allies.

However, the government's actions haven't stopped average Tanzanians or authorities from targeting LGBT people as reports of attacks continue to surface on social media.

"It gives power to the general community to prosecute people," said Mashala about Makonda's mandate.

"I really don't understand why the government is doing all this," Ouma told Global Journalist. "Maybe it might be a political reason or some pressure from some people around religious organizations."

Whatever the reason, the activist vowed to fight back.

"It's time now to stand, to talk and raise up these issues and create awareness of these issues," said Mashala. "Because if we be quiet, then who is going to talk about us?"

Ouma told Global Journalist, "The struggle must continue. You have to fight. Nothing is easy. Nothing is simple. We cannot get to where we want to go if we sit down and relax. We are fighting for freedom."

Mashala told the B.A.R. that in order to win this battle, Tanzanian LGBT activists must take well-planned action.

Tanzania's LGBT community needs to carefully examine laws and policies and craft a strategic plan to gain legal rights, he said, certain that Tanzania will have LGBT rights in the future.

"They should work on abolishing all the laws and policies that are against freedom of people in terms of expressing themselves in terms of sexual orientation or gender identity," Mashala said.

He is irritated that the government uses money, time, and culture and tradition in its refusal to address the antiquated law and government officials' continued use of "God" to promote homophobic attacks.

"If you feel it's a part of our country's culture and traditions, when did this cultural tradition start?" asked Mashala.

While he calls for Tanzania to decriminalize homosexuality and dismantle any other laws that are harmful to the LGBT community, he is also aware that it's going to take time and that it can't be done without international support.

Noting international support that Ugandan LGBT activists have received, Mashala called upon the global human rights and LGBT communities to speak out on behalf of LGBT Tanzanians.

"We need international allies. We need outsiders to kind of give pressure to our government to remind them the treaties that they have signed to comply with human rights," said Mashala.

That support might be coming from LGBT activists and community leaders in Vallejo. Next week, the B.A.R. will report about how the Bay Area city, which has a long personal history with Tanzania, is responding to the LGBT crackdown.