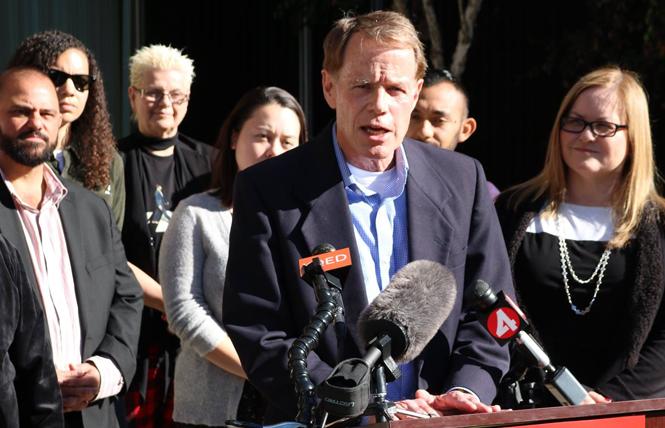 In October, Ken Yeager announced that the Board of Supervisors was going to have a final vote to approve an LGBTQ adult homeless shelter. Photo: Courtesy Facebook

In his 1999 book about the first LGBT people elected to public office in the U.S., Ken Yeager noted that being a politician was "an occupation where the words 'heterosexuals only' might as well be stamped in big letters."

For the last 34 years Yeager has worked to ensure that wasn't the case in Santa Clara County, as the gay San Jose resident co-founded the LGBT political group known as BAYMEC, short for Bay Area Municipal Elections Committee, in 1984 with an eye toward electing out people to public office in the South Bay and California's central coast.

He would go on to be the first to break through that pink political ceiling 26 years ago by winning a seat on the board that oversaw the San Jose-Evergreen Community College District. Yeager would again make LGBT political history in 2000 by becoming the first known LGBT person elected to the San Jose City Council.

And six years later Yeager did it a third time after winning his race for the District 4 seat on the Santa Clara County Board of Supervisors. Now, due to term limits, Yeager is returning to civilian life for the first time in nearly three decades.

Yeager, who turned 66 Wednesday, December 12, celebrated with community members at a party marking not only his birthday but his anniversary of being sworn in as a supervisor a dozen years ago. His last day in office will be Monday, December 31.

When he departs, the county board will again be a "heterosexuals only" political body as, to date, Yeager has been the only LGBT person to ever serve on it. No LGBT candidates sought his seat this year, which will go to Supervisor-elect Susan Ellenberg, a San Jose school board member who has pledged to champion LGBT issues on the board.

"I have been so busy I have not had a lot of time to think about what happens when I drop off the cliff," joked Yeager in a recent interview with the Bay Area Reporter.
He and his partner, Michael Haberecht, will be spending a week in Hawaii in early January. In the spring Yeager, who has a Ph.D., will be returning as an adjunct professor to teach a course on local government at San Jose State University where he formerly taught political science.

His time outside of elected politics, however, may turn out to be a short sojourn if he seeks the state Senate's District 15 seat. Senator Jim Beall (D-San Jose) is termed out in 2020, leaving his Silicon Valley seat open.

Yeager has filed a statement of intent to seek the seat, according to the secretary of state's office, but has yet to open a campaign account to start raising money for a bid. Former Assemblywoman Nora Campos, who ran unsuccessfully against Beall in 2016, has also indicated an interest in running again for the seat. So have former San Jose City Councilwoman Madison Nguyen and Santa Clara County Supervisor David Cortese.

(After the B.A.R. posted this story online, Nguyen reached out to say that she is "not interested in running for Beall's seat in 2020.")

Yeager had looked at running for a state Assembly seat in 2012 but later opted not to mount a campaign, paving the way for the election that year of gay Assemblyman Evan Low (D-Campbell).

"I am still looking at all my options, one of which includes running for state Senate," Yeager told the B.A.R., adding that he would make a decision about the legislative race sometime early next year. 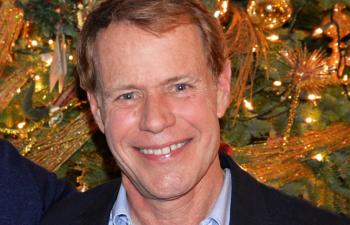 Accomplishments
For those who have been inspired by Yeager and/or worked alongside him, it is hard to fathom not seeing him in elected office. Cabrillo College Trustee Adam Spickler, 47, whose swearing in Monday made him the first transgender man to hold elected office in California, told the B.A.R. that he considers Yeager in the same vein as two other LGBT political trailblazers, the late gay San Francisco supervisor Harvey Milk and former state Assemblyman John Laird.

"I think, as someone who has worked in government outside of Santa Clara County and has watched from a bit afar, what I think Ken has done really well, similarly to John Laird, is been that elected official who knows how to be a leader because he is queer-identified and equally to be a leader regardless of his queer identity," said Spickler, a former legislative staffer for Laird who now works as a senior analyst for Santa Cruz County.

The role Yeager has played in building bridges between the LGBT community and others is something Spickler wants to model during his own time in office.

"He has been a big ally builder for LGBTQ people in the South Bay area," noted Spickler. "In that regard, he is a phenomenal role model."

"I think it is very sad to see him leave because he has been the biggest champion in the valley for LGBT rights," said Campos. "I don't know that people fully understand how much he has done, and what he has accomplished on the board is unprecedented in terms of the LGBTQ community."

In 2015, Yeager pushed to see that Santa Clara County became the country's third municipal jurisdiction with an Office of Lesbian, Gay, Bisexual, Transgender, and Queer Affairs. That has paved the way for a number of LGBT initiatives to be launched, from the opening last month of a transgender health clinic to a soon-to-open homeless shelter specifically for LGBT people.

Three years ago Yeager also pushed to see his county ban taxpayer-funded travel to states that adopted anti-gay laws. He also saw to it that the county fly the pride flag everyday in front of its executive building and, more recently, also raise the transgender flag.

The county has adopted a plan to end the transmission of HIV and improve its services for people living with HIV due to Yeager's leadership. There are also plans underway because of Yeager's support to open senior housing for LGBT older adults as well as an LGBT wellness center in Santa Clara County.

"It is always sad when you lose your biggest champion," noted Campos. "At the same time we want to celebrate everything he has done. We know he is still going to be involved."

Campos added, "Hopefully, the new supervisor cares about our community and, obviously, the existing supervisors do as well and all are supportive of our community. But Yeager is not just a supporter; he was our biggest champion. It is a big loss for us."

According to an interview Ellenberg did with the county's LGBTQ affairs office, she plans to hire an LGBT person to her staff in order to ensure the needs of the community continue to be addressed; something Yeager suggested she do.

"The LGBTQ community can expect me to be a strong ally and advocate for their needs, particularly in the areas of health care and particularly for vulnerable youth and seniors," Ellenberg said according to the emailed transcript of the interview.

Campos told the B.A.R. he has no doubt that Ellenberg will champion LGBT concerns on the board. Nor does he imagine Yeager sitting quietly by should his former colleagues not address LGBT issues.

"We are excited to work with her and are very happy to hear she is hiring someone from the community because it is important to have that perspective," he said. "I know Ken is going to be the first one to speak out if need be on any of these issues. I am not worried about that."

Yeager also told the B.A.R. he believes Ellenberg "will be a great advocate for the LGBTQ community" and its issues.

"I have a sense she wants to continue on with the work that I have established," he said.

In terms of his LGBT legislative achievements, Yeager pointed to the establishment of the LGBTQ affairs office as the one he is most proud of. It imparts a sense of permanence, he explained, in seeing the county address the community's needs.

And the 11 staff positions offer an entrance into local politics for the next generation of queer leaders in the county, Yeager noted.

"I see it as an investment in a much stronger LGBT community and the county being much more aware of our issues," added Yeager.

While acknowledging that the "political winds can change," Yeager expressed confidence that, "for now, everybody wants to make sure this office continues to be funded. Plus, I will be around if I should need to step in if something happens that I don't agree with."

His last board meeting will be Tuesday, December 18.

"I think it is going to be a very special evening," predicted Yeager, who added, "I am going to miss it. It has been great; the amount of change you can do at the county level is just phenomenal."

He is looking forward to having more time to run, bike, and compete in mud runs and triathlons. Due to his father-in-law turning 90 next June, Yeager will be unable to once again enter the AIDS/LifeCycle fundraising bike ride.

Working to create a South Bay LGBTQ Archive housed at the San Jose Public Library's California Room, Yeager recently published two history booklets. One focuses on the county's response to AIDS, the other on its role in the fight for LGBT equality.

He may now turn his attention to updating his seminal book on LGBT political history, "Trailblazers: Profiles of America's Gay and Lesbian Elected Officials."

"It might be interesting to travel the country again to find out who the new leaders are and compare them to the first generation of elected leaders in the 1980s and the 1990s," said Yeager.

UPDATED 12/12 with a comment from Madison Nguyen saying she would not run for a state Senate seat in 2020.