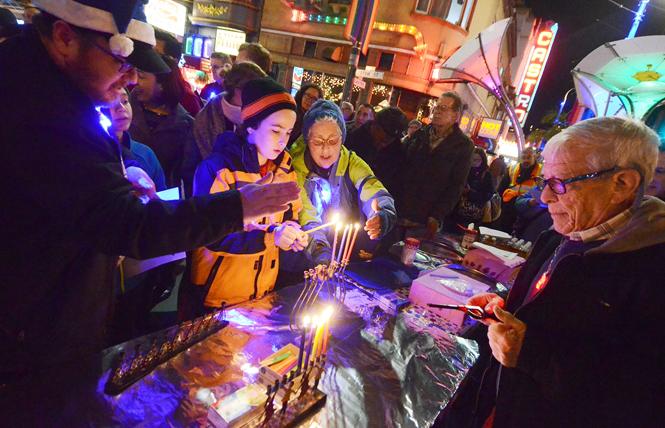 A festive menorah and traditional pastries were part of the recent Hanukkah celebration in the Castro.

Around 75 people gathered at Jane Warner Plaza December 5 for the Festival of Lights observance.

Sha'ar Zahav cantor Sharon Bernstein led the event, as Rabbi Mychal Copeland was unable to attend due to a family commitment.

The evening included speeches, a ceremonial lighting of an electric menorah, music, and singing. Small menorahs that people could wear around their necks were given out, as were sufganiyah — jelly donuts, a traditional Hanukkah pastry.

"The annual Hanukkah celebration has become a great tradition in the Castro," said Andrea Aiello, executive director of the Castro/Upper Market Community Benefit District, as it was getting underway. "The entire community comes out to celebrate, and I thank Castro Merchants for taking the initiative to organize this every year."

"Fire can tear us apart, but it can also bring us together," Bernstein said. "As we celebrate Hanukkah, I ask us also to take a moment and think about the bravery and kindness of everyone who came to the rescue, both during and after these tragedies, to the light that they each bring to the world, and to the light of all those you know, and that we ourselves bring to the world. About the oil that we can each give, even if, and especially if, it seems small. Together we will set the world aglow with strength, peace and love."

The Festival of Lights is an eight-day commemoration of the rededication of the Temple by the Maccabees after their victory over the Syrians.

Gay District 8 Supervisor Rafael Mandelman, who is Jewish, also thanked the police for their presence. About a dozen officers were on hand.

"In many ways we are in dark times," he said. "These challenges can seem overwhelming. The message of Hanukkah is hope in the face of adversity. Even things that seem impossible can be possible and that's a great lesson at a time when our world is facing many challenges."

Bernstein then lit the large menorah as she and attendees uttered the traditional blessings of the Hanukkah candles. People who had brought their own small menorahs were invited to light them. This was followed by the singing of songs, some traditional melodies in Hebrew, but also lighter fare such as "Hanukkah in Santa Monica," a satirical pop tune from singer-songwriter Tom Lehrer.

People who attended told the Bay Area Reporter that they enjoyed the evening.

"I think that community events are very important because they connect us," said Larry Lare Nelson, a gay man. "They connect our various neighborhoods. I do it in the spirit of Harvey Milk because that's what he did. He went to all the neighborhoods and brought people together. I'm also here to show love and respect to my Jewish friends."

Martin Tannenbaum, a gay man, said he is very involved with Sha'ar Zahav.

"Hanukkah is the Festival of Lights and it's wonderful to bring light to the whole community," he said. "What I love is the whole nature of working with the merchants' association so people will support small businesses for their holiday shopping."

The evening concluded with recorded holiday music playing over a loudspeaker as people hung out, talked, danced, and spun dreidels, the traditional four-sided Hanukkah spinning top.