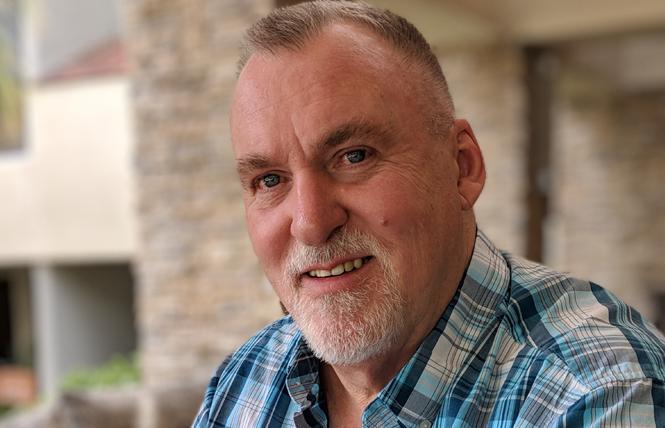 After four years, Scott Morris' sex club 442 Natoma has reached the end of its rope. The owner of the building that houses the gay and bisexual men's space for sex parties has sold it. Morris may have until February to move, though no closing date has been set.

Morris, 64, has been in the 442 Natoma building for 18 years, first shooting porn and then, in 2014, opening the two-level sex club. The owner of the building, elderly woman Louise Behnkey, died in July. Her son, Frank McGill, made the decision to sell the building, which he successfully did to developer Forest City Realty Trust Inc. Forest City is behind two of San Francisco's largest development projects, the 5M project in the South of Market neighborhood and the central waterfront's Pier 70 office and housing proposal. The sex club currently resides within the 5M-project area.
McGill did not respond to a request for comment.

About three months ago, Morris was given a 90-day exit letter asking him to be out by December, but it's possible the new owner will give Morris until February.

Impact on gay community
While there are no hard feelings between Morris and McGill, and Morris said he understands McGill's decision to sell, it will not only have a significant impact on Morris' personal finances, but the gay community as well.

"It's hard when you lose a major source of income and have to let employees who work for you go," said Morris, who employs four people at the club. "Each and every one, when I told them the bad news, said they would stay right here till the very end. One of them said they will be the one to turn out the lights for the last time."

The loss of an STD testing site where DPH can reach a population that, at times, can be challenging to serve, is not welcome news, said Brandon Ivory, a former health program manager at DPH.

"If you have a man or men who may not be completely out of the closet yet and they don't have a venue like this to go to and can't be reached by community organizations or DPH, they are missing out on information and education that can keep them healthy," Ivory, a gay man, said.

Ivory and Morris have been friends for years, and Ivory talked about the proactive measure Morris took with his sex club, something that is not exactly the norm in the sex club industry, Ivory added. DPH does monthly assessments at various sex clubs in the city to ensure they are safe and clean, but Morris invited DPH over and suggested his club as a testing site.

For years, the club has offered hepatitis C, HIV/AIDS, syphilis, and gonorrhea testing once a month at the sex parties. Condoms are also passed out with cards containing information about PrEP for HIV prevention.

"He was definitely going through several boxes of condoms," Ivory, 44, said. "He was one of our biggest distributors of PrEP cards."

Some men came to the club, not for the sex, but exclusively to be tested.

"[One man] found out he was HIV-positive and only came to test, not for the party. He worked an odd work shift and it was easy for him to test there when he got off work. He came back and thanked us and if not for us he would never have known," Ivory said.

Other locations DPH administers testing are the Powerhouse Bar and Folsom Gulch. An attendee of the parties and registered nurse, David John, a gay man, said 442 Natoma was special. Morris initially wanted John to help out with the STD testing, but as a traveling nurse, John wasn't able to.

The space, John said, is an outlet where HIV-positive men can go and not be judged.

"Gay men are very judgmental. If you don't look a certain way or have a certain look you get ridiculed. You know you are not welcome. At 442 Natoma, it is not that way at all," John said.

He also called the club a "treasure" and a "secure" place for gay men to come together and also get tested.

He and his husband, Gord Roy Fulton, spend half their time in Palm Springs, but retirement is, financially, not an option for Morris, nor is it something he wants to do.

"I've worked in the gay business my whole life and I don't ever want to stop," Morris said. "It's who I am and what drives me to wake up in the morning."