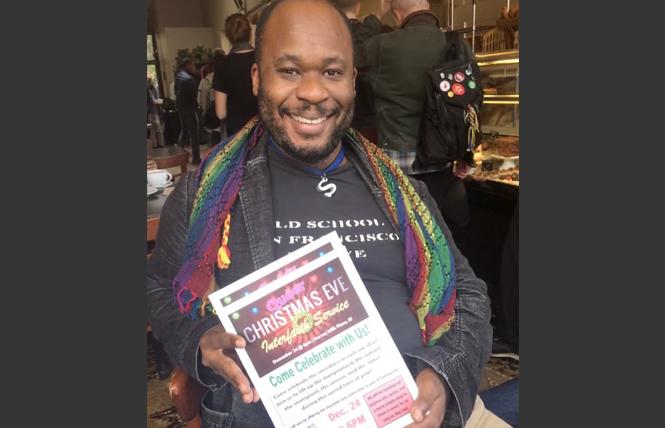 San Francisco Impact Partners, which was started by gay city resident Shaun Haines last year, is ramping up to help people who are homeless this holiday season.

On December 24, SF Impact Partners will join Sacred Space and gather at Harvey Milk Plaza in the Castro to distribute personal care packages. The groups are collaborating with Castro Cares, a program of the Castro/Upper Market Community Benefit District.

At the same time, 6 to 8:30 p.m., across the street at Jane Warner Plaza, Haines and others will be collecting larger items such as luggage, backpacks, and blankets that will be given to homeless people.

Joining Haines in helping promote the Christmas Eve event will be the Bridgemen, a community service group affiliated with the San Francisco AIDS Foundation. SF Impact Partners will support the Gubbio Project, which provides houseless guests with daily provisions, supplies, and chaplaincy necessary for those living on the streets, and St. John's the Evangelist in the Mission. Haines said that in June, his organization helped 100 guests at St. John's.

Haines will also be bringing SF Impact Partners to the Bayview on December 21. There, he is partnering with Mother Brown's and local businesses to collect and distribute personal care packages.

"Mother Brown's is one of the few shelters in the District 10 area," Haines said.

People can donate items for all of the giveaways. Haines said that personal items needed include toothpaste, toothbrushes, soap, and personal hygiene products like tampons for women. Mylar blankets are also needed.

He also said that at both the Castro and Bayview events he wants to find out from unhoused people if they are interested in storage spaces, as SF Impact Partners is trying to arrange for some, as well as job opportunities or volunteer jobs that include a stipend.

The pop-up events are in keeping with the mission of SF Impact Partners. As the Bay Area Reporter noted in a June article, Haines hopes the outreach will grow and that the organization can provide more services in the future.

HIV Story Project merges with AIDS grove
During the recent World AIDS Day commemoration at the National AIDS Memorial Grove, it was announced that the HIV Story Project will merge with the grove.

The story project is a nonprofit that has focused on bridging HIV/AIDS with film, media, and storytelling to fight the pandemic and the global stigma associated with it.

"The HIV Story Project has been a powerful force over the past decade in bringing to the forefront the personal stories of HIV/AIDS in an honest, compassionate way that has really made a difference in educating people about the pandemic and helping to change stigma," John Cunningham, executive director of the grove, said in a news release. "This merger is a natural evolution and will help ensure that the dedication, passion, and mission of the HIV Story Project continues to flourish."

In an interview with the B.A.R., Cunningham said that the story project, which is all-volunteer, has been working hand-in-hand with the grove for several years. Initiatives have included Surviving Voices, a multi-year interview project focusing on underserved communities, and Generations HIV, an interactive video storytelling booth that has captured over 1,200 AIDS testimonials by people from all walks of life.

Cunningham said it's the story project's intellectual property, including several films and archives, that the grove will help preserve.

In an email, Fockele wrote that he couldn't be happier with the merger.

"Of the partnerships the HIV Story Project has forged since its inception in 2009, the one with the grove, which started in 2015, has been the most important one," Fockele, a gay man, wrote. "We've collaborated on multiple PSAs, on stagings of the Generations HIV video storytelling booth, and on the Surviving Voices documentary and interview project that focuses on underrepresented communities. It really is a nonprofit marriage made in heaven."

The HIV Story Project is a 501(c)3 and has basically no overhead budget, Fockele wrote. "All of the money we raised went into projects and our funding usually came on a per project basis, not as operating funds for the organization," he explained.

Smolowitz, who is also a gay man, said that the merger will allow the "small, bootstrapped nonprofit" to grow and thrive.

"Under the care and stewardship of the National AIDS Memorial, storytelling will remain a tentpole strategy for how we honor and remember those we have loved and lost and those of us who continue to survive," he wrote in an email.

Smolowitz added that he plans to stay close and involved with the project and will "continue using my filmmaking skills in powerful ways that serve this goal."

People will write letters to incarcerated trans and gender-nonconforming people. According to a Facebook announcement, TGIJP receives letters from prisoners regarding a variety of issues.

The event is open to the public and is an opportunity for people to celebrate the season with Maitri residents, staff, and supporters.

Entertainment will include Dee Spencer featuring Jason Brock at 3 and Oakland jazz sensation Branice McKenzie at 4.

There is no cost to attend, though donations are welcome. To register, visit https://conta.cc/2zLrQZK.

Puff pot party
Puff, the only queer, cannabis, drag party of its kind, is having a holiday party Tuesday, December 18, from 6 to 9 p.m. at an undisclosed location in San Francisco's South of Market neighborhood that will be revealed the day before the event on social media.

Join DJ Dank and DJ Sergio Fedasz for an evening of dabs, doobies, and gifts. There will also be what organizers billed as "an amazing drag show with some of the best performers San Francisco has to offer."