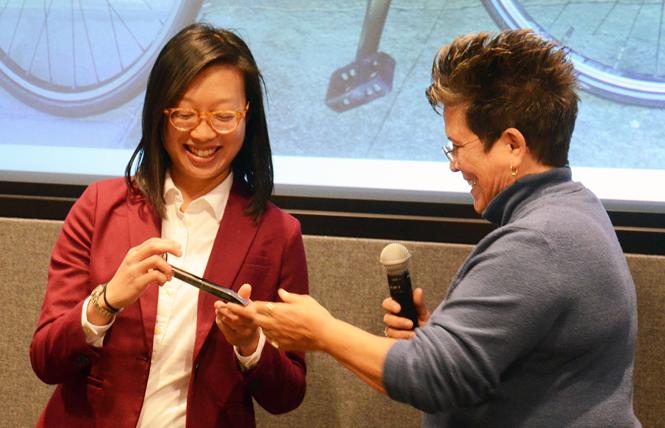 Janice Li, who was elected last month to the board that oversees BART, was celebrated at a reception for LGBTQ leaders and allies and said she is ready to get to work.

Li is the first queer Asian-American woman elected to the transit board, and one of only two LGBTQ elected women in San Francisco. (The other is City College board member Shanell Williams, a bisexual woman who announced Monday she is running for District 5 supervisor and was at Li's event.) Li's District 8 covers the western neighborhoods of the city and includes the Embarcadero, Montgomery, and Balboa Park BART stations.

Li, 31, will be sworn into office December 13 and attend her first board meeting December 20.

In a brief interview Monday, December 3, in the Bayside Room at Pier 1, Li, who is advocacy director for the San Francisco Bicycle Coalition, said that she has been consulting with gay BART director Bevan Dufty, who was a key supporter of her campaign.

"I'm shifting from hypothetical campaign mode to now having real conversations about 2019 priorities," she said, adding that she looks forward to working with lesbian BART director Rebecca Saltzman, who represents portions of Alameda and Contra Costa counties, and Lateefah Simon, a straight ally whose district includes portions of Alameda, Contra Costa, and San Francisco counties.

Dufty told the gathering that "transportation is the lifeblood of the Bay Area."

"I'm hopeful the next few years will be incredibly positive," he added, explaining that with the defeat of the gas tax repeal on the November ballot, transit agencies such as BART won't see vital revenue lost. He praised Saltzman, who was a Bay Area leader in the campaign to defeat Proposition 6.

Suzy Loftus, a former San Francisco police commissioner who is now running for district attorney, told the Bay Area Reporter that she worked with Li on Vision Zero, the city's plan to eliminate traffic deaths, when she was on the police oversight panel.

"The strengths she brings to the BART board are that she collaborates," Loftus said. "She is a very thoughtful advocate and is focused on getting results and less concerned with who gets credit. She's smart and she'll be effective."

Saltzman said that, when Li joins the board, BART will have a majority of women directors for the first time. She was also excited to have an out woman of color on the oversight body.

"I supported Janice because of her expertise with the bike coalition and community," she said.

Brian Wiedenmeier, a gay man who's executive director of the San Francisco Bicycle Coalition, told the B.A.R. that the group's more than 10,000 members are excited to see Li elected to the BART board.

"Not only will she bring the perspective of a queer woman of color to the BART board, but she will also be leading as a person who bikes," he wrote in an email. "Bicycle access to transit — and especially BART — is critically important if our region hopes to reduce its dependence on automobiles."

"She ran a great campaign and will represent the west side well. Her experience with the bike coalition is a great match for BART because we need to think about transportation in all modes," he said.

During his remarks, Dufty said that statewide LGBT advocacy group Equality California was a big supporter of Li's campaign and noted that Michelle Meow, who serves on its board, was in attendance.

Li told the crowd that last week, on the 40th anniversary of the assassinations of gay supervisor Harvey Milk and mayor George Moscone, she joined the march from the Castro to City Hall.

Li urged BART passengers to contact her with issues.

"Text me the literal shit that you see," she said, in reference to the problems BART has with feces and other objects such as needles at some stations.