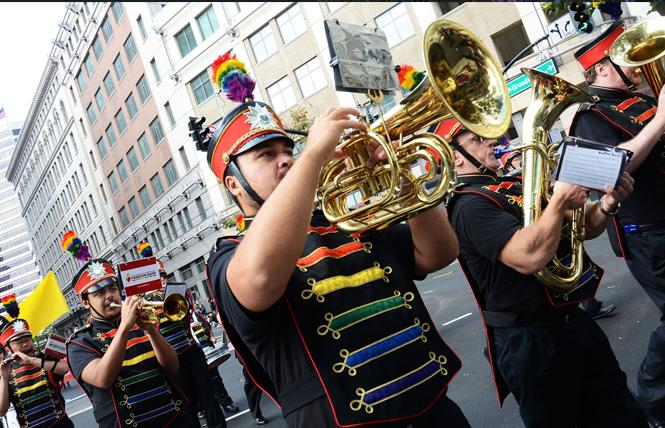 When it comes to having an official city band, San Francisco's leaders say strike up the San Francisco Lesbian/Gay Freedom Band.

At their meeting Tuesday, December 4, the supervisors voted unanimously 10-0, with District 1 Supervisor Sandra Lee Fewer absent, to designate the world's first LGBT musical group as the city's official band. Once the board votes on the designation a second time next week, the ordinance will be sent to Mayor London Breed, who has already told the Bay Area Reporter she will sign it into law.

"The unanimous support for naming the San Francisco Lesbian/Gay Freedom Band the official band of San Francisco demonstrates just how important the band is to our city," gay District 8 Supervisor Rafael Mandelman told the B.A.R.

"For 40 years they have been a cultural mainstay in San Francisco and have proudly represented us and our commitment to LGBTQ equality at events across the country," stated Mandelman. "I'm looking forward to Mayor Breed, who is a huge fan of the band, signing my ordinance and making this designation official."

Doug Litwin, the band's board president who has played both clarinet and percussion in it since 1985, said, "I couldn't be happier."

The group plans to celebrate its forthcoming municipal recognition this weekend during its annual "Dance-Along Nutcracker" concerts.

"It is very exciting; it is validating; it is affirming; it is a million percent positive," said Litwin. "It has never been done for a group like ours as far as I know."

The marching group, which is celebrating its 40th anniversary this year, has for 20 years referred to itself as the city's official band. The honorific is even stitched onto the back of the band members' baseball caps they wear at certain functions.

It began saying it was the official band of San Francisco in 1998, when gay former supervisor Tom Ammiano deemed it as such in a proclamation he authored in honor of the LGBT musical group's 20th anniversary. He did so again in 2003 on the occasion of the band's 25th anniversary.

As Mandelman explained at the Board of Supervisors Rules Committee hearing November 30, the designation won't be finalized until the city adopts the ordinance.

"It has been operating, in a sense, as our city's unofficial official band," noted Mandelman.

The rules committee voted unanimously 3-0 to recommend that the full board affirm the special designation for the LGBT band. Self-described "band geek" District 2 Supervisor Catherine Stefani, a tenor saxophone player in a jazz band in junior high school, made the motion to support the ordinance.

"You do bring joy into so many hearts," Stefani told the band members in attendance that afternoon.

In 1982 it was one of the seven founding member bands of the Lesbian and Gay Band Association, which now numbers 37 musical groups from around the world. For years it has performed during the San Francisco Giant's LGBT game; last month it was invited for the first time to the Golden State Warriors' LGBT night.

"I am pretty sure we participate in more city activities and events than any other musical group, so I urge you to support this ordinance," said Linda Werner, a member of the band since 1979 who plays percussion, at last week's hearing.

In 1984 the city made "I Left My Heart in San Francisco" with music and lyrics by deceased gay couple George Cory and Douglass Cross its official ballad.

Web Extra: For more queer political news, be sure to check http://www.ebar.com Monday mornings for Political Notes, the notebook's online companion. This week's column reported on the trio of out CA leaders advising Governor-elect Gavin Newsom on his gubernatorial transition.