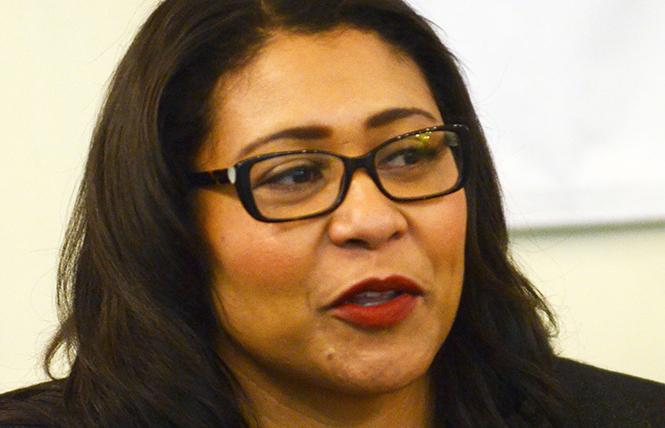 The Tenant Right to Counsel program, as it's known, is the first program of its kind in California and the second nationally, according to a November 26 news release from the mayor's office. City voters approved Proposition F in June, which established the policy that all residential tenants facing eviction in San Francisco have a right to legal representation.

One of the organizations slated to receive funding is the AIDS Legal Referral Panel.

Bill Hirsh, ALRP executive director, told the Bay Area Reporter that the agency will receive about $115,000 for the current fiscal year as part of a collaborative with the Eviction Defense Collaborative.

"We were able to bring on a new staff attorney on October 1 and this will have a big impact on our ability to serve people with HIV who are facing evictions," Hirsh wrote in an email.

Hirsh added that there are discussions among legal service providers around creating a seamless system of referrals for people in the city who are facing an eviction.

"There will likely be a need for greater resources than the city has currently committed to this effort, but we are assessing that need and will be providing feedback to the city," Hirsh added.

In the release, Breed said that as she is a lifelong renter she knows what it's like to face housing insecurity and the threat of eviction.

"I fought to include funding for tenant legal defense services in the budget because no one should face eviction alone without knowing their rights," she stated.

Because Prop F did not create a funding source for its implementation, Breed and the Board of Supervisors rebalanced the city's budget to include $1.9 million in fiscal year 2018-19 and $3.9 million in 2019-20 to fund the program, according to the release.

The Mayor's Office of Housing and Community Development will oversee the program. It carried out a competitive process to select the funded organizations, the release stated. The Tenant Right to Counsel program is ramping up immediately, with full implementation planned for July.

RWF helps Camp Fire victims
The Rainbow World Fund is asking for donations to aid the victims of the Camp Fire in Butte County. So far, more than 80 people have died and the city of Paradise suffered major damage in what's become California's deadliest and most destructive wildfire. It was fully contained over the weekend.

RWF, an LGBT humanitarian organization, is partnering with local LGBTQ groups that are mobilizing to provide front-line aid.

"We are raising funds and collecting needed supplies to deliver to the affected areas," Jeff Cotter, a gay man who's executive director of RWF, wrote in an email to supporters.

SF Pride is looking for local individuals who have contributed in large part to the Bay Area LGBTQI community; or as openly LGBTQI-identifying to the broader society. Nominees must live or be based in the nine Bay Area counties (Alameda, Contra Costa, Marin, Napa, Santa Clara, San Francisco, San Mateo, Solano, and Sonoma).

For the guidelines and to make suggestions, go to http://www.sfpride.org/grand-marshals/. The deadline is 11:45 p.m. January 9.

In other SF Pride news, the organization recently gave $189,000 in proceeds from 2018 events to its community partners.

In a letter to supporters, Executive Director Terry Beswick said that the society has launched Vision 2020, which prepares for a capital campaign for a new world-class museum. Currently, its GLBT History Museum is located in a small Castro storefront that is "too small to adequately represent the richly diverse stories of LGBTQ history," Beswick wrote.

According to Beswick, several donors are offering the matching funds.

There will be an opening reception for "Celebrating Resilience" Wednesday, December 5, from 6 to 8 p.m. A poetry reading takes place at 7.

The Elizabeth Taylor 50-Plus program was started by SFAF in 1982 and is for gay, bi, and trans men age 50 and older, regardless of HIV status.

Bodyscapes founder Diane Sciarretta of the Red and Orange House Foundation previously worked with other long-term survivors of HIV/AIDS to create art and poetry about their lives.

For the new exhibit, Vince Crisostomo, program manager for the Elizabeth Taylor 50-Plus program, brought Sciarretta to Strut in October and she conducted two days of her bodyscapes workshops that were free to group members.

Haring's sister at LGBT center
Kay Haring, the late gay artist Keith Haring's younger sister, will be at the San Francisco LGBT Community Center Saturday, December 8, as part of an art event from noon to 4 p.m. at 1800 Market Street.

Kay Haring wrote a best-selling children's book about her brother, "The Boy Who Just Kept Drawing." She will do a Q&A and book signing, with a portion of book sale proceeds being donated to the center.

Drag queen and trans woman Honey Mahogany will read the book at the event.

Other activities will include a kids' fashion show by Emily Payne from "Project Runway," designer of the Devon Rose children's clothing line; and an art sale of pieces inspired by Keith Haring.

Keith Haring, whose pop art grew out of the New York street scene, died of AIDS in 1990.