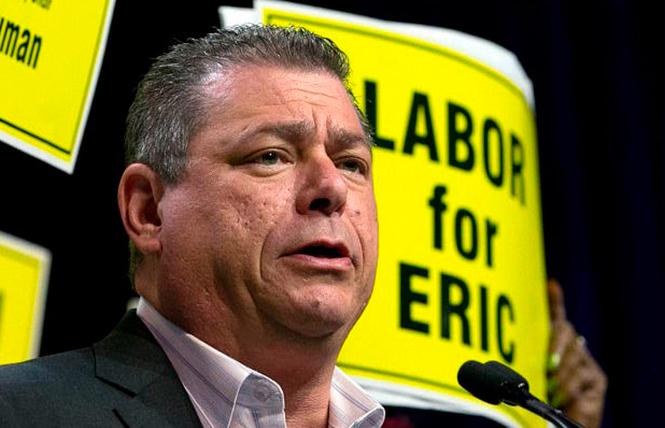 Whether or not gay California Democratic Party Chair Eric Bauman remains in the high-profile position will rest on the findings of an investigation into charges that he sexually harassed young men working for the statewide party and how he handles the shocking allegations against him, a number of LGBT Democratic leaders told the Bay Area Reporter since the scandal broke over the holiday weekend.

Gay state Senator Scott Wiener (D-San Francisco), a former chair of the San Francisco Democratic Party, said Tuesday that he first learned about the allegations over the Thanksgiving holiday weekend like many party officials. He remains in the dark, he said, about the details of what allegedly took place.

According to several sources, it is believed to stem from Bauman's interactions with at least two male interns or staffers. He reportedly has privately denied the allegations in conversations with party officials.

"We need to wait for the investigation to be done," said Wiener in response to a question on if he thought Bauman would remain as party chair. "Understandably, he is being respectful of the right of the people to come forward to tell their stories. But I do not know what is being alleged. I want to wait to see the details and result of the investigation."

Also on Tuesday the executive board of the state party's LGBT Caucus issued its own statement in response to the news about Bauman.

"The LGBT Caucus is committed to the principle that all people should be able to participate in workplaces and the public square without fear of harassment, assault, or abuse. This is the only way each one of us can bring all of our unique talents forward and thrive. Our caucus fights to ensure a healthy and safe environment for every person," read the statement, posted to the caucus' Facebook page by its Co-Chair Evan Michael Minton. "We believe that an unbiased, objective and thorough fact-finding process is critical for the sake of all parties at this time and we would like to assure our caucus members that our party leadership has initiated an independent investigation."

Omar Torres, a gay San Jose resident who represents Region 7 on the state party committee, told the B.A.R. Tuesday night that he believes Bauman should step down immediately as chair and signed on to a petition being circulated among party delegates calling for him to do so. He feels he does not need to wait until the investigation results, said Torres, as he has heard for years about Bauman behaving inappropriately with young male party members.

Wednesday afternoon, after the B.A.R. went to press, the Los Angeles Times posted a story detailing numerous allegations by both male and females staffers of the party about inappropriate sexual comments Bauman made to them both at work and in private settings. The Times also reported that Bauman drank while on the job, sometimes as early as mid-morning.

In response to the Times' findings, Bauman told the paper that he planned "to immediately seek medical intervention to address serious, ongoing health issues and to begin treatment for what I now realize is an issue with alcohol."

But he also indicated he felt he could return to his work as the state party's chair.

"Leading the California Democratic Party to historic victories has been the honor of a lifetime, and I look forward to continuing this important work upon the conclusion of the investigation and when my health allows," Bauman told the paper.

As the B.A.R. reported online Monday evening, Bauman decided to take a leave of absence effective at 5 p.m. that day while the Sacramento law firm Churchwell White conducts an investigation into the accusations. The state party's First Vice Chair Alexandra "Alex" Gallardo Rooker is assuming the duties of chair for the time being.

State party spokesman Mike Roth explained in an emailed statement to reporters that Bauman had made the decision "after taking the holiday weekend to consider the most constructive path forward for" the state party.

"Chair Bauman believes this decision is the best way to ensure the independence and integrity of the process," stated Roth. "The party is confident that the procedures in place will allow for all parties to come forward freely and provide for a thorough and complete review."

The announcement came hours after the B.A.R. reported that gay San Francisco Democratic Party Chair David Campos felt Bauman needed to relinquish his day-to-day management duties of the statewide party while being investigated.

"One thing I would say is I don't see how he can perform his duties while an investigation is ongoing," said Campos, a former supervisor. "From my perspective, at a minimum, he should take a leave of absence so the work of the party can continue."

The Friday after Thanksgiving the state party's Second Vice Chair Daraka Larimore-Hall revealed in a letter to party leaders that a number of the party's "young political professionals" had accused Bauman of sexual harassment and assault in conversations with him. He didn't provide any details of the allegations and said the individuals desired to be left alone or remain anonymous.

"Their stories are devastating. I believe them," he wrote.

After Bauman refused to resign when he confronted him about the charges, Larimore-Hall filed charges calling for Bauman's removal as chair with the state party's human resources department and its secretary, Jenny Bach.

"Obviously, it is completely unacceptable for Chairman Bauman to remain in office given these credible, corroborated and utterly heart-breaking allegations," wrote Larimore-Hall, adding that he would "not tolerate sexual harassment or assault on any level. And once a thorough investigation is conducted, we must work to ensure this never happens again."

The matter then broke open publicly when Congressman Ro Khanna (D-San Jose) tweeted about the allegations late Friday night, calling the accusations against Bauman "shocking." He added that the party should replace Bauman as chair with Stanford law professor Michele Dauber, who in June led the successful recall of former Judge Aaron Persky due to his lenient sentencing of a Stanford swimmer who sexually assaulted and attempted to rape an unconscious woman.

As other news organizations began reporting on the matter, Bauman released a short statement Saturday in which he did not deny the allegations made against him. He did disclose that "a respected outside investigator" was looking into the charges and would treat the individuals "with respect and free from any concerns of retaliation."

Bauman stated, "I take seriously any allegation brought forward by anyone who believes they have been caused pain."

Bauman, who turns 60 next month, lives in North Hollywood with his husband, Michael Andraychak. He became the first openly LGBT chair of the California Democratic Party in May 2017 in a heated and close contest with progressive leader Kimberly Ellis of the Bay Area. He won by a 60-vote margin, which Ellis contested.

Campos told the B.A.R. that he first learned about allegations of improper behavior between Bauman and young people during a bus tour ahead of the November 6 midterm elections on the Thursday prior to Election Day. Bauman was expected to participate in a get-out-the-vote event Friday, November 2, in San Francisco that the local party and House Minority Leader Nancy Pelosi (D-San Francisco) had coordinated.

After learning about the allegations, the local party leaders asked Bauman not to attend.

Keep abreast of the latest LGBT political news by following the Political Notebook on Twitter @ http://twitter.com/politicalnotes .
Got a tip on LGBT politics? Call Matthew S. Bajko at (415) 829-8836 or e-mail m.bajko@ebar.com