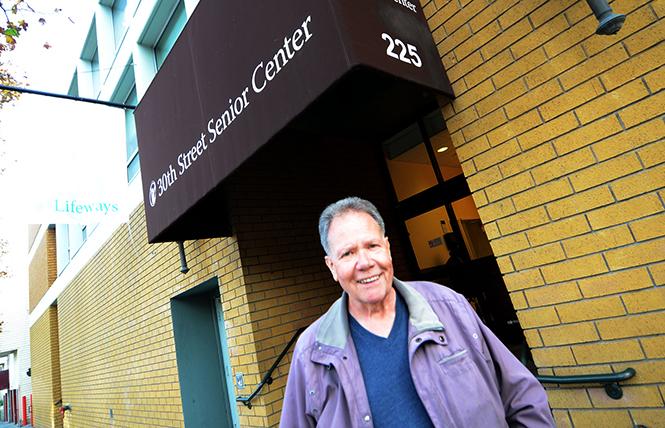 Ed Lehmann spends at least four days a week at On Lok's 30th Street Senior Center having lunch, exercising, and his favorite, socializing with other seniors. The gay man is one of thousands of older adults, LGBTs included, who utilize services offered through the nonprofit's various programs.

On Lok is a San Francisco-based senior health care organization that is the parent organization to multiple nonprofits whose mission is to improve quality of life and care for seniors. On November 6, On Lok launched Mission Nutrition, an initiative to bring awareness to its popular community and home-delivered meals program run out of the 30th Street center.

Lehmann, 70, retired two years ago after being a cab driver in San Francisco for more than 30 years. He would often drop passengers off at the senior center and they raved about it, so he decided to give it a shot.

Today, Lehmann participates in the Fall Prevention Program, Always Active, and nutrition lectures every week at the center. But it's lunch where he gets most of his socialization in, a very important aspect of his life that he doesn't find elsewhere.

"I have met a lot of really nice people from being at the center," he said. "The center is important to everyone who comes here. I have friends here I wouldn't have otherwise."

The meal service that began in 1979 provides hot meals to nearly 3,000 low-income San Francisco seniors who are susceptible to hunger and the health problems associated with poor nutrition. Every year, the program serves more than 88,000 meals at the 30th Street center and five other dining locations throughout the city, officials said. Another 130,000 meals are packaged and delivered to almost 350 seniors, many disabled, at their home every year.

The number of LGBTs who participate in the On Lok meal programs is not yet known as the intake forms were updated just six months ago to include an identity question, said Valorie Villela, director of the center. Anecdotally, however, Villela said she's known many LGBTs throughout the years, mainly gay men, who use the center. Officials are expected to have "more concrete" data on LGBT participation this time next year, Villela told the Bay Area Reporter.

Despite a lack of data, the director emphasized how important the program is to the LGBTs who use it.

"There is this myth that [LGBT seniors] have what they need and that is totally wrong," said Villela, who is a straight woman. "Many seniors, including LGBTs, happen to be house rich, but cash poor. Their Social Security is not keeping up or they don't have the kind of job that fully supports them. Many have to choose between medication and eating something."

Seniors are asked for a suggested $2 donation at every meal, but no senior is ever turned away from a meal, and all incomes are kept confidential. The only requirement of the program is participants must be 60 years or older.

Early outreach
On Lok is funded largely by grants from the San Francisco Department of Aging and Adult Services. Shireen McSpadden, a bisexual woman who's the executive director of DAAS, said the city's partnership with On Lok is integral, particularly because of its work servicing minorities including the Latino and LGBT communities.

"They were one of the first mainstream organizations to educate themselves in doing better outreach and in-reach for the LGBT population," McSpadden said, adding that Villela and her board have done a great job at creating a welcoming environment for all people.

"She wanted to make sure LGBT people felt free to be out," McSpadden explained.

Throughout the years, On Lok has partnered with Openhouse, which offers housing and community services to LGBT seniors, to educate On Lok staff on cultural competency and encourage LGBTs to use its services.

One of the reasons Lehmann continues to return to the senior center is because, "as a gay man, I've never felt any discrimination here," he said. Although Lehmann is not low income, he understands how valuable the service is to his senior friends, some of whom are low-income LGBTs.

The low-carb, low-sodium, and low-sugar meals have also improved Lehmann's health and, he thinks they're delicious. His favorite is Chile Verde pork stew, which he has asked to be served more often because "everyone likes it so much."

The meals are made from scratch and reflect a variety of food traditions including Latin American and Asian. They are served Monday-Saturday in the community dining room at noon and 1 p.m. The center, at 225 30th Street, also offers nutrition lectures, taught by Villela, which Lehmann attends.

Aside from the nutrition-rich meals provided, the opportunity to socialize during the meal can be equally important.

"The Community Meals Program helps connect seniors to each other," said On Lok CEO, Grace Li, in a news release. "Mission Nutrition allows us to achieve our goal of nourishing souls and minds with companionship and human interaction. One of our priorities as an organization is to enable seniors to live full, independent lives for as long as possible."

Lehmann said conversations at the table involve, well, "everything, you name it. Sometimes current events, but not politics too much."

The lower Nob Hill resident utilized the Fall Prevention Program after he suffered a fall about two years ago. Since joining he has not had one since. "It really does work," he said. In the class he practices balance, upper body strength, and if he does fall, how to get up easier and safer.

Since participating a few times a week in Always Active, the hour-and-a-half exercise class that includes 60 minutes of general conditioning led by trained professionals certified by national fitness organizations, Lehmann has been taken off both his diabetes and blood pressure medications after 20-some years.

"I'm really seeing the results," he said. "I like it because every day of the week there is a different person leading Always Active," he said. "Each has their own way of doing it. It's not the same every day."

Lehmann, originally from Boulder, Colorado, is married and said his husband cooks at home and doesn't go to the center. But for Lehmann, the center is home away from home.

For more information about Mission Nutrition and the various programs offered at the center, visit https://30thstreetseniorcenter.org/ or call (415) 550-2210.

Updated 11/29/18: This article was updated to state that grants from the San Francisco Department of Aging and Adult Services largely funds On Lok.