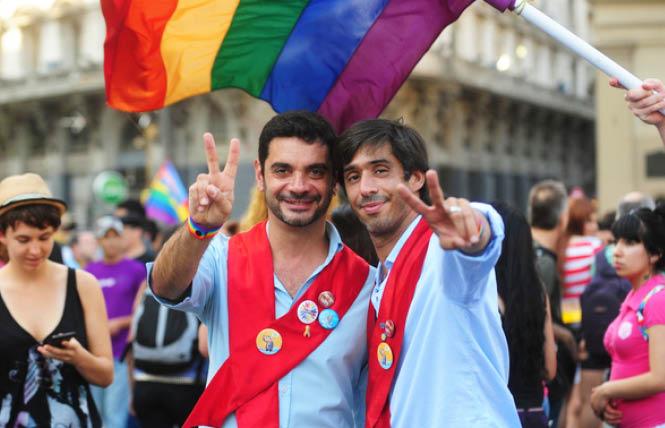 The court action paves the way for same-sex marriage to be legal in 18 months, after it's published in the official gazette next week.

Same-sex weddings could begin in May 2020.

"This is a fundamental step in continuing the fight for the human rights for LGBTI people in Costa Rica," she told the Los Angeles Blade.

President Carlos Alvarado Quesada, who took office in May, ran with same-sex marriage as one of his major campaign platforms. Former President Luis Guillermo Solís struggled to push a same-sex marriage bill through the legislature, but it failed to be passed.

"It's now just a matter of time. Full equal rights will come, love will prevail," Alvarado Quesada tweeted on Thursday. He added the ruling was "a big step forward toward equality."

The ruling has been 11 months in the making. It follows a landmark decision by the Inter-American Court of Human Rights. Located in Costa Rica's capital city of San Jose, IACHR ordered Costa Rica and other Latin American and Caribbean countries to legalize same-sex marriage and transgender rights if they haven't already.

Marriage equality opponents were critical about the ruling.

Reuters reported that the Catholic Church's Episcopal Conference of Costa Rica insisted the "natural order of things" and "[the] basic family nucleus of society is based on monogamous and heterosexual marriage."

Denmark withholds funding to Tanzania
Tanzania's second-largest funder, Denmark, is withholding millions of dollars due to the anti-gay crackdown led by a regional governor last month.

Denmark's Minister for Development Cooperation Ulla Tornaes announced November 14 via Twitter that the country was withholding about $10 million from Tanzania due to concerns over the country's recent human rights violations.

"I am very worried about the negative development in Tanzania, the latest being the completely unacceptable homophobic statements from a commissioner," Tornaes tweeted, without mentioning Paul Makonda, governor of Dar es Salaam, directly.

Tornaes also hinted that another $6 million might be pulled from Tanzania's government, but didn't say when, reported Into More.

The BBC reported that she also canceled an upcoming planned trip to the East African country.

"Currently, about half of our cooperation goes through the government," Tornaes claimed. "I will look at changing that, so we don't work directly with a government leading a politic that goes in the wrong direction on human rights issues."

The announcement came right after the World Bank announced it was withholding a planned $300 million loan to Tanzania's Ministry of Education to improve access to quality secondary education. The bank wasn't pleased by the country's policy of banning pregnant girls from attending school.

Court strikes down Guyana anti-transgender law
The Caribbean Court of Justice struck down a part of Guyana's colonial-era law banning cross-dressing in public.

The international court, which has jurisdiction in several Caribbean and South American countries, ruled November 13 that the 1893 British law was "from a different time and no longer served any legitimate purpose in Guyana," reported Pink News.

The court heard a challenge to the law led by four transgender women who were arrested in 2009 and punished for "cross-dressing in public."

At the time of their conviction the women were fined $100 each and told by a magistrate to "go to church and give their lives to Jesus Christ," reported the website.

The court agreed with the women that the "law resulted in [transgender] and gender-nonconforming persons being treated unfavorably by criminalizing their gender expression and gender identity."

The court decided that the law was "unconstitutionally vague" and it went against the South American country's own constitution, which protects its citizens from discrimination. Therefore, the antiquated law violated the appellants' "right to protection of the law and was contrary to the rule of law."

The court also found that the magistrate acted inappropriately by telling the women to turn to Jesus.

"No one is to be treated in a discriminatory manner by any public office or authority," the court wrote in its decision.

Guyana is the only South American country that still criminalizes homosexuality.

Belize and Trinidad and Tobago in recent years struck down their colonial-era anti-sodomy laws.

Hundreds of people came out in June to celebrate Guyana's first Pride in Georgetown. The Pride marchers called for the country to end its anti-LGBT discrimination.

The event is similar to America's Spirit Day, an event to show pride and solidarity with the LGBT community.

"I think that this kind of propaganda should not take place in schools, it has to be calmly and consistently opposed," said Duda in the interview. "If such a law was created and would be well written, I do not exclude that I would approach it seriously."

Poland is a member state of the European Union, which protects LGBT rights.

Duda's statements also go against his country's supreme court, which ruled against a print shop for denying printing a banner for an LGBT organization in June, according to Human Rights Watch.

Remy Bonny, a political scientist specializing in LGBT issues in central and eastern Europe, told LGBTQ Nation that the Polish government has "no problems with copy-pasting their illiberal policies" despite suspecting the Russian government of orchestrating the murder of the country's previous president, Lech Kaczynski in 2010.

He believes that the Polish government is attempting to appease rural voters who hold the majority electorate over big cities, such as Warsaw, where a "progressive and queer scene is developing."

"These attacks on the LGBT community are a political strategy to win the votes of the people living in the Polish countryside," Bonny said.

Same-sex couples rush to the altar in Costa Rica
Sign up!