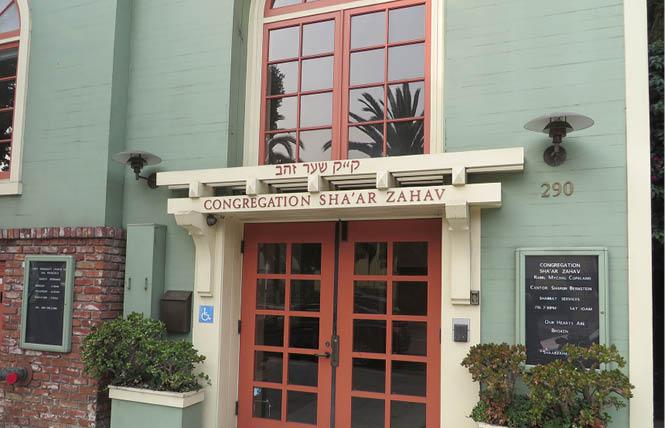 Congregation Sha'ar Zahav has applied for a grant to enhance security, including to its front entrance and exterior lighting. Photo: Charlie Wagner

Congregation Sha'ar Zahav, the predominately LGBTQ synagogue in San Francisco's Mission neighborhood next to the Castro, is responding to an increase in violent attacks on religious institutions across the nation by taking measures to enhance its security, according to a letter sent to congregation members by President Nancy Levin November 13.

Two deadly attacks came in the same week in October.

On October 24, a white supremacist murdered two black seniors at a market in Louisville, Kentucky, minutes after surveillance footage captured the same person trying to forcibly enter a locked African-American church. Three days later, a man who had posted anti-Semitic statements online killed 11 and injured six at the Tree of Life Synagogue in Pittsburgh, Pennsylvania.

"As we mourn the victims at the Tree of Life Synagogue and contemplate these challenging times, security is high on our list of concerns," Levin's letter began.

Levin, 62, said the synagogue has not had any threats in the past, and that was confirmed by lesbian Rabbi Mychal Copeland, 48.

Security measures under consideration include improvements to the building's front entrance, exterior lighting, a system to rapidly contact law enforcement, and training for front lobby attendants during congregational events. The congregation has formed a Security Task Force, according to Copeland.

Synagogue staff, working with members, has written a grant request for funds to underwrite the security measures.

"There are federal, state, and city grants available," Levin explained in an interview with the Bay Area Reporter, "and we are waiting to see if our request is funded."

Sha'ar Zahav also has strong ties with other religious institutions in San Francisco, Levin and Copeland both pointed out. Levin emphasized the importance of these ties because the recent attacks targeted diverse religious denominations.

"Security has a lot to do with partnering and coordinating with neighbors," Levin said, adding that is another avenue Sha'ar Zahav has pursued with its immediate Dolores Street neighbors.

Commenting on the history of the Sha'ar Zahav synagogue, Levin, a lesbian, said it "was started 41 years ago by three gay men looking for a place to be themselves. They started to meet and the congregation became a home for LGBTQ and many other people."

She portrayed the early congregation as a collection of people who "felt like they didn't really fit in elsewhere" and "wanted a place where you could come as 'you are.' People who were maybe considered outsiders."

Today, Levin described Sha'ar Zahav as a synagogue that "welcomes diversity and sees the divine in everyone."

Copeland said that there are no other LGBTQ synagogues in the Bay Area. She and Levin noted there are many LGBTQ-welcoming Jewish congregations.

Copeland expressed her pride in the congregation and said, "Our prayer book was written by our community and is unique. It includes prayers for transitioning gender and prayers for taking medication. People come from far and wide to attend services at Sha'ar Zahav." The Reconstructionist Rabbinical College was the first rabbinical program to admit openly LGBT people, beginning in 1984, Copeland added.

Over the 41 years, Levin said Sha'ar Zahav has had many addresses. "Early on we met in the Women's Building, and at one time we were in Glide Memorial Church, then the Metropolitan Community Church, and then were on Danvers Street until we outgrew that location."

Copeland said, "We moved to 290 Dolores Street 20 years ago in December on Hanukkah." Levin characterized the current location as, "an area of many churches and places of worship. A spiritual area. We own the building we're in now, and have services on Friday and Saturday."

But on Sundays, Levin said, the Mennonites use the same sanctuary for their services. She said, "The Mennonites have been outspoken allies and supporters of Jews since Pittsburgh." She recalled Copeland's column in the J-Weekly where the rabbi wrote after the anti-Semitic shootings in Pittsburgh in October, "At my synagogue, I'll take 20 Mennonites over armed guards."

Joanna Lawrence-Shenk, pastor at the First Mennonite Church of San Francisco, told the B.A.R. that her congregation "has stood vigil the last three Fridays during the Sha'ar Zahav service."

"After the Tree of Life killings, I contacted Rabbi Copeland and said we're horrified and want to support you and your congregation," Lawrence-Shenk wrote in an email.

Lawrence-Shenk, 35 and a straight ally, added that Mennonites, who are part of the Christian tradition, "have always believed in, and preached, non-violence."

"We don't believe more guns make us safer and the only option is to hire armed guards," she wrote.

The church has always been LGBT-inclusive, Lawrence-Shenk added, and was founded by straight and queer people.

Levin's letter promised congregation leadership is working to "keep our spiritual home both a safe and welcoming place."

"We are surrounded by people who are standing up for us," she wrote.

In her letter, Levin also expressed her gratitude and thanks to "numerous faith-based organizations around the city and the NAACP," and encouraged congregation members to "continue to come out, show up, and be surrounded by our community."

Sha'ar Zahav will hold its menorah lighting ceremony in the Castro Wednesday, December 5, starting at 6 p.m. in Jane Warner Plaza, in conjunction with Castrol Merchants. Everyone is welcome. For more information about Sha'ar Zahav, visit https://shaarzahav.org/.

Updated, 11/29/18: This article was updated to include that Congregation Sha'ar Zahav president Nancy Levin identifies as a lesbian; that there are no other LGBT synagogues, though there are many that are LGBTQ-welcoming; that the Reconstructionist Rabbinical College was the first rabbinical program to admit openly LGBT people, beginning in 1984; and that it was Copeland's column in the J-Weekly where she wrote, "At my synagogue, I'll take 20 Mennonites over armed guards," and a link to that column (https://www.jweekly.com/2018/11/09/at-my-synagogue-ill-take-20-mennonites-over-one-armed-guard/).