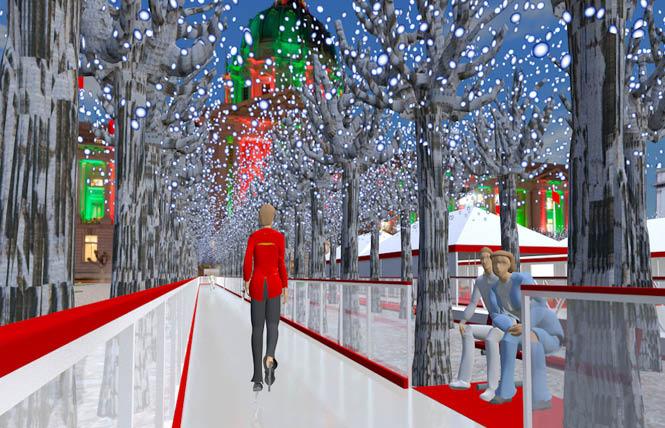 Winter Park is an all-new ice experience steps away from City Hall. It's operated by Willie Bietak Productions, the same company that runs the ice rink in Union Square.

Joining Boitano in the inaugural festivities will be Mayor London Breed and San Francisco Recreation and Park general manager Phil Ginsburg. There will be special performances on the ice from San Francisco Ice Theater and Mayumi Nakomoshi.

Following the ceremony, local youth will take the ice for the first skate of the season.
Winter Park consists of an ice rink and track woven through a lighted tree forest. It will operate daily from noon to 10 p.m. through January 6. Tickets are $20 for adults and $15 for children under 8, and includes skate rental.

Children in the Tenderloin in grades K-12 will get a chance to experience Winter Park free of charge. The company also plans to work with nonprofits such as St. Anthony's to host programs to benefit the homeless and low-income residents.

For more information and to purchase tickets, visit https://winterparkicerinksf.com/winter-park-san-francisco. Click on "In the Community" to learn more about the Tenderloin and other programs.

The awards were announced November 16.

The three-part series on LGBT data collection was written last summer as part of a California Health Journalism Fellowship project with the University of Southern California-Annenberg Center for Health Care Journalism.

It looked at the importance of state agencies and local San Francisco departments collecting the SOGI data, as it's called, to make sure the LGBT community is counted in government programs. The articles also examined challenges around collecting gender identity information because of the different ways people describe themselves.

B.A.R. publisher Michael Yamashita praised Bajko's reporting, calling it "important" both for the paper's readers and state and local policymakers.

News editor Cynthia Laird said that Bajko continues to report on the topic.

The Thanksgiving Day dinner and community gathering takes place from 1 to 9 p.m. Food will be served from 2 to 5. Unique Soul Catering is providing dinner.

Activities will include games, music, and movies in a fun family environment.

Volunteer opportunities are available from set up to serving to clean up. To request a volunteer shift, contact Jack Beck at jack@turnout.org. For more information, go to https://www.oaklandlgbtqcenter.org/thanksgiving.

There is no cost to attend; donations are welcome.

The pop-up winter wonderland, located at 54 Washington Street in the square, will feature merchandise, activities, and photo opportunities for the whole family and special events like kid's yoga.

In other holiday news, the Jack London Square holiday tree lighting will take place Friday, November 30, from 5 to 8 p.m.

Panel looks back 40 years after Briggs initiative
Veterans of San Francisco's progressive community will take a look back at the Briggs initiative, which was defeated 40 years ago this month, during a special edition of "The Michelle Meow Show" at the Commonwealth Club Thursday, November 29, at noon at the club's offices, 110 The Embarcadero.

The Briggs initiative (Proposition 6), named for its sponsor, conservative state lawmaker John Briggs, was on the November 7, 1978 ballot. It sought to ban gays and lesbians from working in California public schools. Voters rejected it.

Ammiano is a former schoolteacher, school board member, and president of the San Francisco Board of Supervisors. He launched the campaign that successfully fought Prop 6.

Englander is a lecturer and historian at San Francisco State University and also teaches at City College of San Francisco.

Craig worked to establish a gay presence in the Democratic Party. She was manager for the No on Prop 6 campaign and worked alongside Ammiano, Harvey Milk, Sally Miller Gearhart, Bill Kraus, and Hank Wilson.

The event is free. For tickets, visit https://bit.ly/2zXIJ2t.

Food for Thought events
Food for Thought, which provides groceries and frozen meals to people living with HIV/AIDS and other serious illnesses in Sonoma County, has a couple of events coming up.

This weekend, people are invited to help the nonprofit kick off the holiday season at its Food for Thought Antiques Gifts and Garden store, 2701 Gravenstein Highway South, in Sebastopol. From 10 a.m. to 5 p.m. November 23-25 people can enjoy hot cider and goodies while shopping for gifts. There will be storewide savings on holiday items, furniture, and more.

The store also accepts donations and the agency is always looking for volunteers. For more information, visit https://www.fftfoodbank.org/shop-1/.

Then, on Thursday, November 29, Food for Thought will hold its 17th annual Dining Out for Life benefit. There are 66 participating restaurants that have pledged to donate between 25 and 50 percent of the day's sales to Food for Thought.

Organizers said that there are options throughout Sonoma County for breakfast, lunch, and dinner.

In addition to dining, there is also a raffle that people can participate in. Items include two three-day passes to Outside Lands 2019, a couple's spa package at Osmosis Day Spa, and much more.