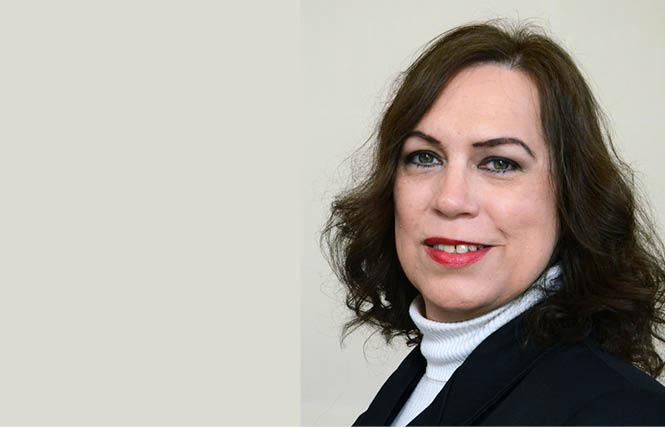 It's the end of an era. Tiffany Woods, longtime trans activist, is leaving the groundbreaking transgender program she helped found in Fremont. The mom of three is co-founder of TransVision, the first comprehensive health and social services program for transgender and gender-nonconforming people in Alameda County. It was founded in 2002 and is run by Tri-City Health Center.

It's a "bittersweet" experience, Woods, who is a transgender woman, said, but being able to spend more time with her middle school-aged daughter and 10-year-old twin boys is great. Woods and her family relocated to Sacramento last year and she has been looking for another job in the area since. Her last day at Tri-City was Thursday, November 8.

Now, she is transitioning to a job advocating for the trans community at the state level. Woods was unable to disclose her new position because her employer has yet to announce it. She did say, however, that she is looking forward to a new chapter of her life.

"I am excited for a new beginning and new challenges," Woods, 55, said in an interview with the Bay Area Reporter. "I'm excited to do statewide transgender work and expanding what I've been doing on the county level."

Her new job seems the perfect extension of the work she has been doing locally for decades. Woods was hired to help start TransVision, which was created in direct response to the death of trans Latina teen Gwen Araujo, who was murdered in 2002 in Newark, California.

"After Gwen was murdered, the trans teens in the county, everyone, disappeared and went underground. Everyone was afraid," she said. "The first year of the program, it took awhile for the community to trust us."

(Araujo's killers have served varied sentences. Jose Merel was granted parole in 2016. Michael Magidson is in prison, his next parole hearing will be no later than October 12, 2019. Jason Cazares pleaded guilty to voluntary manslaughter and was discharged from prison in 2012. Jaron Nabors pleaded guilty to manslaughter in exchange for his testimony and has been discharged.)

When Woods looks back, she said she is most proud of the fact that trans people now have access to health care in their community, reducing barriers to medical necessities. Since 2005, TransVision has been the sole Alameda County Office of AIDS contractor providing HIV prevention education services to transgender women throughout Alameda County, with a focus on African-American and Latina transgender women. The nonprofit is funded by the county's Office of AIDS Administration.

"I am just so proud that we created something in the East Bay that hadn't existed before," she said. "It was only San Francisco that was known for having that, that's a big impact. This should be something youth in every county have access to."

The program has gone on to serve as an international model of transgender-affirming, primary care and HIV delivery program for transgender and gender-nonconforming people.

"Before Tiffany, it wasn't even a thing," said Richard Ajluni, director of development for Tri-City Health Center. "She designed, defined, and developed a magnificent program that is a modeled all around the county."

Her departure from the program "is a big loss to the agency," Ajluni said.

Woods' dedication to trans activism also led her to be an organizer of Alameda County's annual Transgender Day of Remembrance in Oakland for 11 years. The event is commemorated nationally, this year on November 20, and acknowledges trans men and women who have been killed and promotes non-violence against trans persons. The event was started by Gwendolyn Ann Smith, who writes the Transmissions column for the Bay Area Reporter.

The East Bay TDOR service is now overseen by the Pacific Center for Human Growth, and will take place November 20 at the center in Berkeley.

TDOR is needed now more than ever Woods said.

"We're in an epidemic of trans violence across the country. Murders are going up each year, not down. The last two years saw the highest total of transgender people killed on U.S. soil," she said.

According to the nation's largest LGBT advocacy group, the Human Right Campaign, in 2017, advocates recorded at least 29 deaths of transgender people in the U.S. due to violence, the most ever reported. This year has already seen 22 deaths, as of mid-October, according to HRC.

Liaison to police
To help mitigate violence against the trans community, Woods continues to serve as the transgender and LGBTQ liaison to the Oakland Police Department. She provides education and awareness training on topics of bias and correct use of gender pronouns. She told the B.A.R. a story about a young client of hers, a trans Latina woman, who worked in the sex industry. After the young woman experienced an assault, Woods took her to get a rape kit and then to the OPD. Two police officers walked in and said, "Hi Miss Woods," Woods said.

"The client immediately had trust and was more at ease," Woods said. "The officers knew how to use pronouns in that situation."

The position is vital, Woods added, "It's, for me, an amazing way to make progress. In order to make change we need reform in criminal justice especially in the trans community."

"Tiffany has been instrumental in helping us really bring awareness and education of the LGBTQ community," she told the B.A.R.

"When we look back at Brandy Martell or Sasha Fleischman and the Ghost Ship fire, all three were major incidents that happened in our community that Tiffany was instrumental in helping us to bring awareness, education, and community messaging and being able to communicate with our community about what happened and what we are doing as a department," Watson said, referring to the murder of a trans woman and the incident where Fleischman was set on fire on a bus.

Two years ago, Woods assisted the Oakland mayor's office, OPD, and the Alameda County Sheriff's Office and Coroner's Bureau on the deaths of the three young transgender people who lost their lives in the Ghost Ship warehouse fire. Feral Pines, 29, Cash Askew, 22, and Em Bohlka, 33 were killed in the 2016 blaze. Woods issued guidance on respectful and accurate reporting and coordinated media interviews.

In the past, she has been a member of the Alameda County HIV Planning Council; a consultant with the Transgender Law Center working on the Health Care Access Project; and in the 1990s she was at the forefront of the HIV/AIDS epidemic in the East Bay as the first transgender empress of the nonprofit Imperial Court of Alameda County.

"Tiffany was one of TLC's first community partners, championing health services and transition-related care in Alameda County at a time when health care access for transgender people was scarce," said Cecilia Chung, Transgender Law Center's co-director of programs and policy.

But to Woods, one of the most challenging things in her life is being a mom. Living in Sacramento with her wife of more than 20 years, the two have hectic schedules with school pick-ups, and everything that comes with being a mom of three.