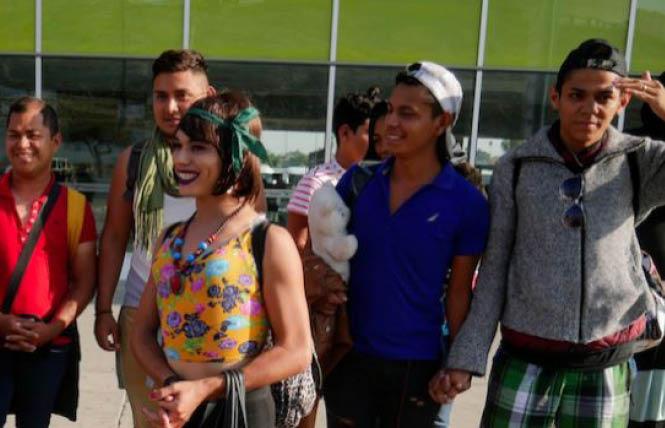 A migrant caravan of nearly 80 people, many identifying as LGBT, arrived in Tijuana, Mexico, across the border from San Diego, November 11, surprising local community organizations.

The Washington Post reported that a second group of 360 migrants made it to Tijuana on Tuesday morning.

Queer or not, President Donald Trump placed a roadblock in their way November 9, signing an interim executive order limiting asylum by restricting the ability to claim asylum to ports of entry.

"Invoking laws that were in the past used to keep out — and thus ensure the deaths — of hundreds of thousands of Jews, Trump is drawing on the most shameful precedents of our history in his fervor to destroy our communities," Transgender Law Center Executive Director Kris Hayashi said in a November 9 news release.

The National Center for Lesbian Rights also issued a statement.

"President Trump's plan would not only unlawfully limit asylum but would rewrite the character of our nation. For generations, America has been a refuge for those fleeing persecution in their home countries," NCLR policy counsel Tyrone Hanley said in a November 9 news release from the organization.

He spoke about the hundreds of LGBT asylum seekers the NCLR has worked with and the atrocities they face in countries where their own governments should, but don't, protect them.

"For many, asylum is a life and death matter," Hanley said. "Trump's plan to refuse asylum seekers based on where they enter the U.S. is not only cruel but will be a death sentence for many in our community."

Hayashi said that at least one trans woman has died.

"At least one transgender woman from Honduras seeking safety in the U.S., Roxana Hernandez, has already died because of this administration's inhumane actions," Hayashi noted.

"U.S. law specifically allows individuals to apply for asylum whether or not they are at a port of entry. It is illegal to circumvent that by agency or presidential decree," said Jadwat.

Fleeing for safety
The LGBT caravan broke away from a larger group of an estimated 6,531 people from Honduras, Guatemala, and El Salvador fleeing violence and persecution due to discrimination and verbal abuse, they told reporters.

The caravan has broken up into three groups traveling at different paces several days behind the main caravan, according to media reports.

"It has been very difficult because of the harassment, the bullying, the jokes, the ill treatment toward us. They exclude us from things that we should be allowed to do. They treat us as if we are abnormal," Jozue Robles, who is from Honduras, told Reuters at a campsite last week.

The queer migrants were not allowed food and other necessities, he said.

"Honduras ... is a country that has a lot of violence for people who identify as gay, lesbian, or trans," he said. "They kill people. They decapitate them. That's why I ran away."

Robles said that people are united by the rainbow flag and they are determined to find safety in the United States.

Nehemías de León is another member of the group who arrived in Tijuana.

"I think we're going for a better life. We want to work. We want to be what we've always been — honorable people," he told NBC.

Neighbors of Playas de Tijuana, A.C., a community organization, was surprised by the group's early arrival.

"Very surprised because we did not know about the arrival of this caravan," the group posted in Spanish on Facebook, reported Newsweek, which translated the post.

César Mejía, a member of the caravan, reportedly told the neighborhood group that they planned to stay in Airbnbs for about a week while American lawyers worked with them in their bid for asylum in the U.S., Newsweek reported, citing ABC 10 News.

The policy
The various caravans will need the assistance once they arrive at the U.S.-Mexican border, which is expected in a few weeks.

After weeks of stirring up immigration fears on the campaign trail, Trump signed a new 20-page interim federal policy limiting the eligibility of asylum seekers. The policy went into effect immediately.

The new policy limits the eligibility of asylum seekers coming through Mexico and where they can claim asylum to only points of entry at the United States border processed by Border Patrol officials.

Those who enter the U.S. other than at official points of entry now through February 8 will be charged with improper entry, a misdemeanor.

This will subject asylum seekers to an alternative similar to the process for those who have been convicted of serious crimes in the U.S., according to experts.

Prior to Friday, a non-U.S. citizen could claim asylum at any point of entry — official or not — along the border and provide proof of persecution within specific criteria outlined in the Immigration and Nationality Act.

To help Border Patrol officers, the Pentagon sent 5,200 troops to the border to join the 2,000 members of the National Guard last week at Trump's directive.

Immigration advocates challenge Trump
Less than six hours after the policy went into effect Friday, the Southern Poverty Law Center, the ACLU, and the Center for Constitutional Rights filed a lawsuit challenging the executive order in federal court in San Francisco.

Overriding congressional law isn't something the administration can do, according to the attorneys.

The new attack on asylum seekers is a bolder usage of the same rational the Trump administration has used with the travel ban, according to experts.

Furthermore, immigration attorneys are challenging the process of how the policy was issued, stating it violated the Administrative Procedure Act.

The policy was completed under former Attorney General Jeff Sessions before Trump fired him November 7. The interim rule further limited eligibility of asylum seekers, such as victims of gang and domestic violence who no longer qualify for asylum, under laws already implemented by Sessions, according to media reports.