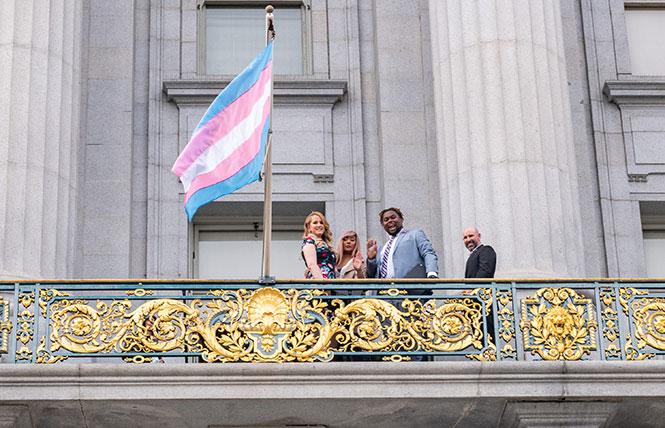 Clair Farley, left, Melanie Ampon, and others wave from the Mayor's balcony at San Francisco City Hall after the transgender flag was raised for the first time Tuesday, November 13. Photo: Jane Philomen Cleland

For the first time, the transgender flag was raised outside City Hall.

Tuesday night, the building was lit with the pink, blue, and white colors of the trans flag, which has occurred before.

"Today, we are a part of making history," Clair Farley, director of the city's Office of Transgender Initiatives, said at the event. "As the Trump administration continues to attack our communities, in San Francisco we stand up against these attacks and celebrate each other here. In San Francisco we don't erase people, we understand that our differences are what makes us special."

She was referring to the Trump administration's efforts to strip federal recognition of trans people. The New York Times reported last month that the administration prepared a proposal to limit the identification of a person's gender to include only "male" or "female" that is listed at birth.

Individuals and organizations around the country participate in Transgender Awareness Week, which officially began Monday, November 12. Its purpose is to help bring visibility to transgender and gender-nonconforming people and address the issues the community faces, including violence. The Transgender Day of Remembrance, November 20, focuses more on the unprecedented fatal violence against trans people and remembering those who have lost their lives in the past year. Bay Area Reporter Transmissions columnist Gwendolyn Ann Smith started it.

Speakers at the City Hall event focused on the achievements made for the trans community in the city, including Breed's recent directive that ordered all city agencies and departments that collect demographic data to include the option of nonbinary on all forms; the first cultural district in the country to be named in honor of trans people, Compton's Transgender Cultural District; and the first trans-led office.

As well, the speakers emphasized the continued struggles trans people face, especially at a time when the Trump administration continually rolls back LGBT rights.

"I wanted to do something really special to commemorate this time. I am not only committed to making sure we celebrate our trans community, but that we honor it by doing something that has not been done anywhere else in our country," Breed said, commenting on her proclamation declaring November as Transgender Awareness Month.

For the first time this month, Breed met with the Transgender Advisory Committee. Maceo Persson, civic engagement and operations manager for the Office of Transgender Initiatives, told the B.A.R. in an email that important issues were discussed including the need for trans-specific housing, health care, mental health services, and arts and cultural programs.

Tuesday's ceremony also comes as Breed is being pressed by some LGBT advocates to name a trans person to the school board. Current school board Commissioner Matt Haney won the District 6 supervisors race last week and will soon resign his position, giving the mayor an opportunity to appoint someone.

Two trans people ran in the November race for the San Francisco Unified School District Board of Education, though both lost their bids. Mia Satya, a trans woman, and Martin Rawlings-Fein, a trans man, would be the first transgender public officials in the city if Breed were to appoint either candidate to the upcoming vacancy.

As previously reported by the B.A.R., there is currently only one LGBT member of the school board, Mark Sanchez, a gay former school principal in the district who won re-election to a seat on the governing body in 2016. He had previously served on the school board in the 2000s.

Mandelman said, as the only out supervisor on the board, he has a special responsibility to represent and advocate for the trans community.

"In San Francisco, as I think we all know, the trans community continues to face disproportionate and unacceptably high rates of violence, homelessness, and unemployment," he said. "Despite the advances made as a city, it's clear we need to invest in additional support services and resources to address these disparities."

Ampon spoke about the importance of engaging the younger trans community.

"Trans and gender-nonconforming youth need to see more representation that they identify with. They need to see and believe that they can be leaders too," Ampon said.

Personna, 72, talked about the historic 1966 Compton's Cafeteria riot that happened in the Tenderloin district, an event many echoed in their speeches. The riot began at the all-night diner after one transgender woman resisted arrest. It is one of the first recorded LGBT-related riots in United States history. Personna hung out at the cafeteria and was friends with those involved in the riot.

"They put in place the foundation for liberation," she said. "I wasn't brave enough to do that. They came before us and they are our models. Their lives are not in vain."

"I am super excited that the entire month is going to be Transgender Awareness Month," Kowell said. "That's pretty historic and exciting and big. I look forward to seeing what kind of events they will do next year for it."

Kowell, who works at the San Francisco Community Health Center, grew up in Ohio.

"I've been in San Francisco for 10 years and the city never ceases to amaze me," Kowell said. "I remember going to the first Trans March and just seeing the amount of support behind it.

In related news, the San Mateo County Board of Supervisors Tuesday voted 5-0 to approve a resolution reaffirming the county's support for transgender people.