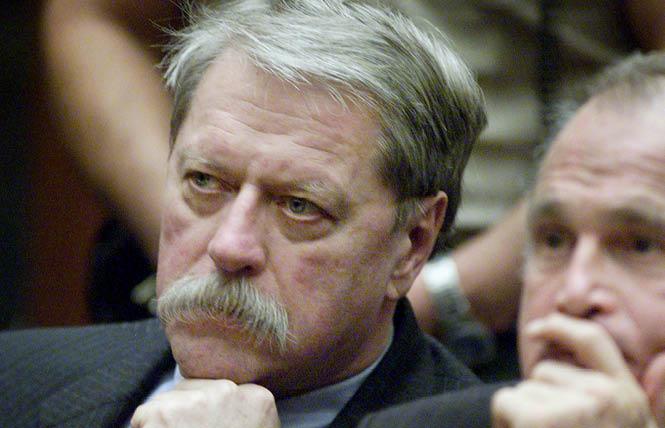 Robert Noel, left, listens with his attorney, Bruce Hotchkiss, as the verdict is delivered in his 2002 trial. Photo: Lance Iversen/pool photo

The Bay Area Reporter has learned that Robert Noel, convicted along with his wife, Marjorie Knoller, for the 2001 fatal dog mauling of lesbian neighbor Diane Whipple, died over the summer on his 77th birthday.

The case against Noel and Knoller was one of the most publicized trials in Bay Area history, generating international news attention and dominating local headlines for months.

According to a death certificate obtained by the B.A.R. late last week, Noel died of heart failure June 22 in a nursing home in La Jolla, about 12 miles north of downtown San Diego. His ashes were scattered off the San Diego County coast June 28.

Noel was paroled in 2003 after serving more than two years on a conviction of involuntary manslaughter for the death of Whipple, his neighbor who was mauled by one of his two Presa Canario dogs in the Pacific Heights apartment building where he and Knoller lived. Knoller, who was with the dogs during the hallway attack, was convicted of second-degree murder. Now 63, Knoller is up for parole next year after having served more than 17 years in jail and state prison.

Noel had lived in relative obscurity in the 15 years since being paroled in the Solano County city of Fairfield, about an hour northeast of San Francisco. He worked as a baker and lived in a small apartment in Fairfield for years. But in recent years, Noel's Facebook posts reflected a downturn in his life with health problems, a brush with homelessness, and a deep depression after having to part with a service animal in late 2016. The animal, a German Shepherd, had apparently become his closest companion. His profile photo showed the dog, Nikko, and most of his recent posts were about the animal, with occasional political posts against President Donald Trump and in support of former President Barack Obama. His writings also noted a recent reconciliation with his only son and namesake, Robert Noel.

It is unclear when Noel relocated to San Diego but he was still living in Solano County at least through late 2016, according to his Facebook posts. The disbarred lawyer had connections to San Diego. He lived and worked there in the early 1980s as an assistant U.S. attorney in the Southern District of California. Online records show that his son lives in San Diego County. The son's Facebook profile also states that he works there as deckhand. The B.A.R. was unable to contact the son for comment.

Noel had kept in contact with this reporter over the years since the case began in 2001, mostly through email and Facebook messages. In 2016, he reiterated his support for Knoller and said he supported her until his "last breath." He added: "I'm here after fifteen years ... not leaving her now."

Noel wrote on Facebook about his struggles with various health issues and by the fall of 2016, his life appeared to be on a downward spiral. Noel wrote on November 1, 2016 that he was living out of a van and wanted to die but that he was happy that he still had his dog with him.

Noel had apparently changed his mind about separating from his dog. By late November he wrote that it had been three weeks since he had to give up the dog. He later wrote that his doctor told him the chills and other physical symptoms he was experiencing were the result of being separated from the animal.

Last year, eight months before his death, his resentment over Trump's election was still very much on his mind, he wrote in an email to this reporter. "On every one of Trump's properties or partnerships around the world are insurance policies for liability and property damage written for risks significantly different than having the POTUS personally involved," Noel wrote. "Why are his insurers not pulling coverage putting him out of business?"

2002 trial
The case against Noel and Knoller was tried in 2002 in Los Angeles. A change of venue had been granted because of the intense publicity in the Bay Area. The original trial judge, San Francisco Superior Court Judge James Warren, once told the couple in court that they may be the most hated people in San Francisco. Immediately after the January 26, 2001 attack, the couple were widely perceived as being coldly defensive, unsympathetic, and unremorseful. In a "Good Morning America" interview in early February 2001, Knoller said the attack became deadly when Whipple struck her in the eye after she tried to get between the dog and Whipple after the dog had lunged at her. But after the couple's arrest, in several jailhouse interviews with the B.A.R., they did express sympathy and remorse for Whipple's death. In the 2002 trial, the jury ultimately sided with prosecutors who had argued that the couple knew their dogs were dangerous but did little to mitigate the danger.

Both Noel and Knoller were lawyers. The couple's legal practice involved a number of lawsuits against the state prison system. They legally adopted prison inmate Paul "Cornfed" Schneider, who had directed a dog-breeding business from prison. The high-ranking Aryan Brotherhood gang member is serving three life terms. In interviews with reporters, Schneider, 56, expressed sympathy and regret over Whipple's death. Schneider, Noel, and Knoller maintained that Schneider owned Bane, the dog that attacked Whipple, as well as Hera, the female Presa Canario that was Bane's designated mate. Noel and Knoller said they were the dogs' caretakers.

Aside from the tabloid headlines, the case made LGBT history when Whipple's partner of seven years, Sharon Smith, was allowed to proceed with a wrongful death suit as a domestic partner. The National Center for Lesbian Rights joined attorney Michael Cardoza to fight for Smith's right to sue.

"In 2001, there were hardly any protections for our relationships under state law," NCLR's outgoing Executive Director Kate Kendell wrote on the organization's blog in 2011 memorializing Whipple and praising Smith's courage on the 10-year anniversary of Whipple's death.

Kendell added, "Sharon became a very unlikely, and in some sense, unwilling, activist. Sharon made the decision to attempt in every way she could to vindicate Diane's death. ... Up until Sharon's case, it was virtually unheard of for a same-sex partner to be permitted to sue for wrongful death. In every prior case, the surviving partner was deemed a 'legal stranger,' regardless of the length or depth of the relationship."

Two books were written about the case and it made celebrities out of the attorneys involved in the trial. The lead prosecutor on the case, Jim Hammer, is a gay man who has since left the San Francisco District Attorney's office and is now in private practice. The other prosecutor on the case, Kimberly Guilfoyle, went on to prominence as a Fox News host and legal analyst. She left the network in July to work for a pro-Trump super PAC and is dating Donald Trump Jr. She had married Governor-elect Gavin Newsom, then a San Francisco supervisor, in December 2001 before divorcing in 2006.