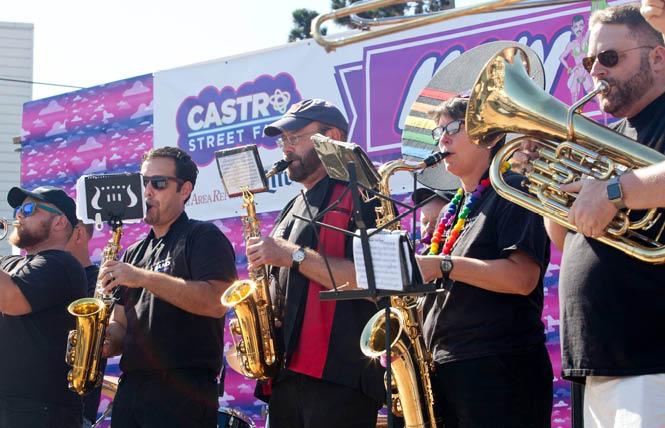 The San Francisco Lesbian/Gay Freedom Band, for two decades now, has called itself the city's official band. As proof to its claim, the 40-year-old musical group points to two city proclamations it has received.

Gay former supervisor Tom Ammiano authored both, first in 1998 and again in 2003, on the occasion of the band's 20th and 25th anniversaries. Each noted that the ensemble was the first openly gay music group anywhere in the world.

"We are very proud of it and have been using it ever since," Doug Litwin, the band's board president, told the Bay Area Reporter of the honorary designation as the city's official band.

Yet honorary is basically what the accolade has been for the last 20 years. Now, the band and gay District 8 Supervisor Rafael Mandelman want to make it legally binding.

Mandelman has introduced an ordinance that, once signed into law, would amend the city's administrative code and formally declare the LGBT band as the official band of the city and county of San Francisco. The Board of Supervisors Rules Committee is scheduled to vote on it Wednesday, November 28, before being taken up by the full board in early December.

"I think because of the role it's played in the city," Mandelman told the B.A.R. when asked why he wanted to grant the LGBT band such an honor. "It is a quintessential institution in the city. Plus, the role it has played nationally and internationally, it makes sense to name it San Francisco's official band."

Storied history
The LGBT band has a storied history, with its first public performance pegged to when it marched in front of the late gay supervisor Harvey Milk in the 1978 Pride parade. Originally called the San Francisco Gay Freedom Day Marching Band and Twirling Corps, its founder was the late Jon Sims, who also formed the San Francisco Gay Men's Chorus that year.
(The choral group's first public performance was on the steps of City Hall at a vigil the night Milk and then-mayor George Moscone were killed inside the building the morning of November 27, 1978.)

In 1982, it was one of the seven founding member bands of the Lesbian and Gay Band Association, which now numbers 37 musical groups from around the world. For years it has performed during the San Francisco Giant's LGBT game; this month it was invited for the first time to the Golden State Warriors' LGBT night.

Litwin, a member of the band since 1985 who is "bi-sectional," i.e. he plays both clarinet and percussion, had approached city leaders about getting a new proclamation to mark the group's 40th year after running into Lee and gay former District 8 Supervisor Jeff Sheehy at the 2017 AIDS Walk where a small group of band members had performed. The proclamation that Sheehy presented this past June during the band's anniversary dinner gala, however, didn't mention the LGBT band being the city's official band, said Litwin.

After Mandelman won the special election in June for the District 8 seat on the board, his staff has been working with Litwin on the official city band designation for the group. Legislative aide Tom Temprano told the B.A.R. they hope to have all 11 supervisors as co-sponsors of the ordinance as well as the support of Mayor London Breed.

"We hope this is a non controversial ordinance that can pass unanimously at the board, and that the mayor will gladly and proudly sign it," said Temprano.

As for Breed, who used to play the French horn as a child and has a standing invitation to rehearse with the LGBT band, her spokesman Jeff Cretan told the B.A.R. that the mayor supports designating it as the city's official band.

"I'm a huge fan of the San Francisco Lesbian/Gay Freedom Band, which represents the best of our city with their message of inclusion and pride that they carry throughout San Francisco and beyond," Breed said in a statement to the B.A.R.