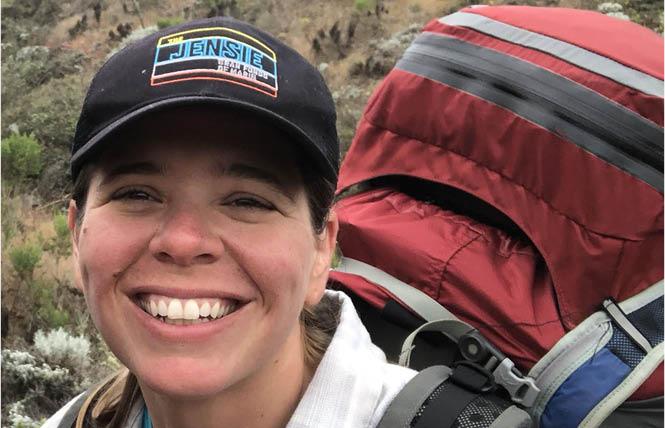 The club, formed in 1986 under the name San Francisco Bay Chapter Gay and Lesbian Sierrans, is part of the Sierra Club and changed its name to better reflect community diversity and inclusion.

"We have about 350 active members," board chair and outings leader Beth Bittle told the Bay Area Reporter. "Currently we have a majority of women, but several years ago it was mainly men. The balance seems to change every two or three years."

The club's activities are as diverse as its membership.

"We usually have about three or four outings a month," Bittle said. "We have hikes, kayaking, cycling, bird-watching, camping, cleanup trail restoration. ... It's a broad range of activities. And you don't have to be a hardcore hiker. We have a variety of hikes of different distances and difficulty."

Bittle said some new members hear about the chapter through the Sierra Club and others find the club through its meet up page.

Bittle, 41, said she has been in the club about five years.

"I love, love, love being out in nature," she said. "This is a really good way to be out and be social. People know it's a safe space. And a lot of the people are looking to meet friends. You're around like-minded people."

In addition to the holiday party, the Rainbow Sierrans will have a hike Saturday, November 17, in Sonoma Coast State Park; and meet up in the Castro district Saturday, December 1, to start an urban walking tour of Mount Sutro Open Space, Twin Peaks, and Glen Canyon Park.

Membership in the Rainbow Sierrans is $15 a year. For more information, visit http://www.rainbowsierrans.org.

Farewell, USA Gymnastics
I'd say it will be interesting to see when the other shoe drops for USA Gymnastics, but gymnasts generally do not perform in shoes.

In the wake of the enormous Larry Nassar sexual abuse scandal and the mountains of evidence of USA Gymnastics' culpability in enabling a culture of athlete abuse and exploitation, the U.S. Olympic Committee has moved to strip USAG of its national governing body status. In the short term this means reports will be submitted to the USOC board for a final determination on USAG's fate. If the board decides to boot USAG, the USOC would, for the time being, assume direct responsibility of managing the national team programs.

USAG was already on the ropes. It has lost its sponsorships, been teetering on the brink of bankruptcy, and has dropped executive officers as though they were talcum powder. Right now USAG should be basking in the glow of Simone Biles' incredible year, in which she won her fifth national championship, her fourth world all-around title, and set records for most world gold medals and total world medals for a female gymnast. Instead it is suing to try to get its insurers to help cover the estimated $75 to $150 million in damages it expects to have to pay in settlements with its sexual abuse victims, faces further criminal charges, and apparently saw an executive arrange to have evidence destroyed.

Somehow, I don't think it's going to stick the landing.

Update on trans wrestlers
Earlier this year I reported on two transgender high school wrestlers, one of them a boy who was forced to wrestler in a girl's state championship and the other a boy who was outed by a coach to his teammates and bullied off the team. (See the March 15 Jock Talk, "Wrestling Transgressions," at https://www.ebar.com/news/news//257171?ch=news≻=news&sc2=&id=257171.)

Mack Beggs was a senior and won the state title in Texas and now wrestles on the men's team at Life University in Georgia.

Aidan Pogue-Krabacher was a freshman at Wilmington High School in Ohio and had been wrestling with other boys since the sixth grade, when he started his transition. He left the team last year when his coach, Kelly Tolliver, called him a girl in front of his teammates and told him to change in the girls locker room, and then his teammates started to bully him.

Tolliver's actions were an apparent violation of Ohio High School Athletic Association policies that protect the medical privacy of transgender students. The school board president assured a local television station and an investigation into the coach's actions was launched.

The result? Well, my calls to the school district were not returned, the results of the investigation are not publicly available, the coach was given a written warning — and he's still the coach. Krabacher is still not allowed to use the boys locker room or restroom. Krabacher has said he still wants to wrestle — but not for that coach and not under those conditions.

"The school should do what they said they would do, which is to provide all staff, parents, and students education on transgender and LGBTQ students," Sheila Pogue-Krabacher, Aidan's mother, told reporters. "They must support these students and give them ability to succeed. People fear what they don't understand. Everyone wants to feel accepted in their own skin; the most important thing we could get out of this is to have policies put in place that protect students. If we can help other students, this is all worth it. I'm a mama bear, and when you bully my kid, that's unacceptable."