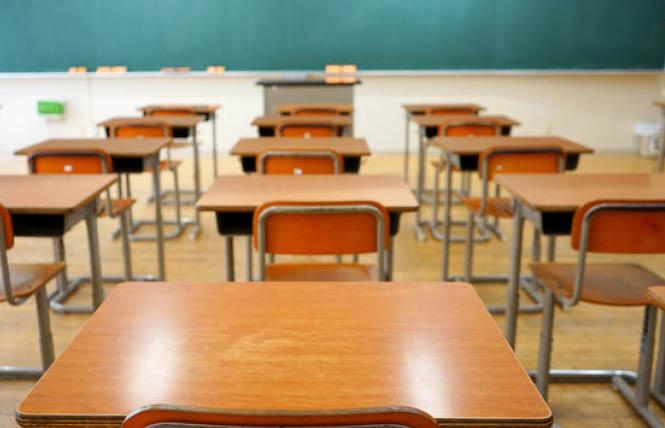 A battle is brewing in California over teaching sexual health courses that cover sexual orientation and gender identity.

As school districts across California introduce new LGBT-inclusive curriculum materials into history and social science classes, another battle is brewing over the teaching of sexual health courses that cover sexual orientation and gender identity.

Jennifer Chou, a reproductive justice and gender equity attorney for the American Civil Liberties Union Foundation of Northern California, explained in a recent interview with the Bay Area Reporter that the law requires students be taught "comprehensive sex ed" at least once in middle school and at least once in high school.

"It allows comprehensive sex ed to be taught prior to middle school so long as it is done in an age appropriate way," said Chou. "If a school does decide to seek comprehensive sex ed before the seventh grade, it has to be LGBTQ inclusive. Specifically, that means it has to acknowledge people have different sexual orientations."

Over the last two years the ACLU has heard "anecdotally," she said, that many school districts are following the law.

"Our sense is a majority of districts are already complying with the law or are on their way to complying with the law," said Chou. "Unfortunately, there is no mandated reporting requirement associated with the California Healthy Youth Act. As far as I know, no agency is sort of tracking that granularly."

But parents concerned, and at times confused, about what their children will be taught have been speaking out at their local school board meetings as districts around the state work to adopt the new guidelines for sexual health classes. Controversies have engulfed schools this year in Chino, San Diego, and Orange County over the teaching of the new LGBT-inclusive sexual health curriculum.

It has also been an issue in the more liberal Bay Area. As the B.A.R. reported in May, the Fremont Unified School District voted against adopting a new sex education program for fourth through sixth graders due to parental complaints about the LGBT-inclusive instruction. A majority of the district's five-person school board voted to adopt the comprehensive sex-ed program for seventh through ninth grade students and to exclude sex education entirely for elementary school students.

The educational news website Ed Source noted in a recent story that parents in Palo Alto and Cupertino also voiced objections to their school districts moving to update their sex-ed curriculums. While Palo Alto moved forward with its new sexual health curriculum, Cupertino's school board revised what its middle school students are learning in response to the parental outcry.

Anti-gay groups, meanwhile, have been falsely warning their supporters that the state is now requiring children to learn the LGBT "birds and the bees" when it comes to sex. They have also been claiming that the new curriculum requirements downplay abstinence-based lessons in favor of teaching heterosexual sex practices to students.

The conservative groups have also been pushing for parents to be allowed to opt out their children from the classes during which the LGBT lessons are discussed. Current state law allows for parents to opt their children out from the sex-ed classes completely, but not on a piecemeal basis based on what is being taught on a certain day.

"Capitol Resource Institute is proposing districts in California adopt such a policy by expanding their current notification and opt out policy to include ALL sensitive subjects mandated as a result of the California Healthy Youth Act," explained Karen England, head of the group, in a recent email. "Our policy takes the current Sexuality Education opt-out notice and extends that to all Family Life Education. Although the law says that Family Life Education issues are not subject to mandatory notification, that does not prevent a school district or charter school board from providing notification and opt-out on those subjects."

"Schools cannot allow parents to selectively opt their students out of LGBTQ content," she explained. "The school would then be facilitating discrimination."

In response to the pushback against the LGBT-inclusive health curriculum mandate, LGBT advocates have been working to educate parents, as well as the larger community, about what the new sexual health instruction actually teaches children. They are closely tracking how state education officials update the instructional guidelines and classroom materials to ensure they not only include the required LGBT topics but are also accurate and based on sound science.

"I think it is important for our entire community to continue to engage in this conversation on the updates of the sexual health framework," said Our Family Coalition Executive Director Renata Moreira. "Our goal is for it to be honest, accurate, and inclusive."

Despite the fearmongering by conservative groups, Moreira stressed that the sex-ed curriculum is being developed so that it is age-appropriate.

"No one in the fourth grade is going to teach kids how to have sex. It is about health and honest health education classes based on the facts, science, and accurate information, not a political agenda," she said. "We do not want to antagonize those who do have fears. But it has been a very long process with a lot of community engagement. It is not coming out of the blue."

Our Family Coalition, since last year, has been holding forums for parents and educators to talk about the new requirements for sex-ed classes. Children are not allowed at the sessions so that attendees can have frank discussions.

"We now work with parents and educators across the state to have their fears and concerns addressed," said Moreira.

Similar to how the state's Board of Education reviewed and approved updates to the history and social science framework that led to the adoption of new textbooks with LGBT content, California educators are now working to update the Health Education Framework and sex-ed teaching materials so they include the required LGBT lessons.

The state agency's Instructional Quality Commission in September held its first hearing on a draft of the new Health Education Framework that, once adopted, will provide guidance to educators and curriculum publishers about how they should be teaching and including the LGBT-inclusive health education lessons.

As Our Family Coalition warned ahead of the meeting, "opponents of sex ed have submitted hundreds of comments demanding that LGBTQ-inclusive language be removed from the framework, making arguments like it discriminates against students from 'traditional families' and makes cis and straight students feel excluded from classroom discussion."

The ACLU's Chou told the B.A.R. that the hearing "went really well" and that the commission members "commended the people who came and spoke in support of LGBTQ students for their support for inclusivity."

The commission also heard from advocates from the conservative groups fighting against the new LGBT sexual health lesson plans. Nonetheless, Chou said she is "cautiously optimistic" of seeing them be adopted in 2019.

LGBT parents and advocate need not wait until then to ensure their local schools are meeting the requirements of the California Healthy Youth Act.

"For LGBT parents, students, and allies, we really encourage them to check in with what their own schools are doing and make sure their schools are aware of the law and are implementing it in a way that meets the needs of their students," said Chou. "Communicate with either their district and also with us if they have concerns about their schools to be moving slow to implementation or needing support for implementation. We are really trying hard to be a resource for both community advocates and school districts who are trying to effectively implement the law."

At its March 22-23 meeting the commission is expected to vote on whether it will recommend that the state Board of Education adopt the revised framework. The state education board is scheduled to vote on the new framework at its meeting in May.

The proposed Health Education Framework can be reviewed online at https://www.cde.ca.gov/ci/he/cf/.

The website includes a Public Input Template for those interested in submitting public comments. Once filled out, it should be emailed to healtheducationframework@cde.ca.gov.