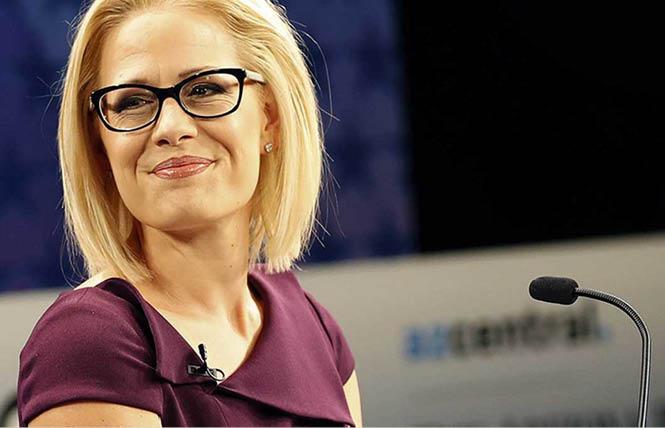 Senator-elect Kyrsten Sinema made history with her win in Arizona.

Media organizations called the Arizona U.S. Senate race Monday night for Democratic Congresswoman Kyrsten Sinema, who will become the first openly bisexual person to be elected to that body.

Sinema's victory is a major one for the LGBT community, which has only one other member of the Senate: lesbian Tammy Baldwin (D-Wisconsin), who easily won re-election last week.

"An LGBTQ woman winning a U.S. Senate seat in a state that voted for Trump is a game-changer, both for the LGBTQ community and the Democratic Party," said Parker, referring to President Donald Trump's 2016 election. With both Baldwin and Sinema in the Senate, Parker said, "the U.S. Senate will certainly find our community more difficult to ignore."

Sinema flipped the seat that's held by retiring Senator Jeff Flake, a Republican who has been critical of President Donald Trump, but nevertheless usually votes in line with Trump's position, most notably for Supreme Court Justice Brett Kavanaugh.

Information from the Arizona secretary of state's office Monday night showed Sinema more than 38,000 votes ahead of her opponent, Republican Congresswoman Martha McSally. Sinema was behind when the polls closed November 6, but Arizona had an unprecedented number of early ballots handed in on Election Day, causing a delay in reaching a final count.

The Associated Press called the race for Sinema at 5 p.m. Pacific Time, and several other major media outlets followed suit. McSally soon thereafter posted a video message on Twitter, saying she had just called Sinema to congratulate her for becoming Arizona's first female U.S. senator. Sinema is also the first Democratic senator from Arizona since 1976.

The credit for Democrats' success in the heavily Republican state is being given largely to Sinema's moderate record and approach to issues. According to the political analysis group at http://www.fivethirtyeight.com, the three-term congresswoman voted "in line with" Trump's position 57.4 percent of the time. That compares with the liberal Baldwin's 22.1 percent.

Sinema is the highest-ranking out bi elected official; Oregon Governor Kate Brown, who was re-elected last week, is the only other.

McSally may yet find herself in the Senate. Arizona Governor Doug Ducey (R) is expected to have an opportunity to fill a vacancy. Shortly after Arizona Senator John McCain's death, Ducey named former Senator Jon Kyl to the seat, but Kyl made it clear he wanted to serve only until the end of the year. Political observers say McSally has the edge to being named to that seat.

Of the eight House members, four are first-time members: Chris Pappas of New Hampshire, Sharice Davids of Kansas, Angie Craig of Minnesota, and Katie Hill of California. Hill's race, another cliffhanger, was called the day after the election. She defeated well-known anti-LGBT incumbent Steve Knight.

The outcome of one important LGBT candidate's race is still in limbo. In Texas, election officials have until November 20 to call the winner for the 23rd Congressional District. Initial media reports indicated Republican incumbent Representative Will Hurd had beat his lesbian Democratic challenger, Gina Ortiz Jones. But within hours of that call, Jones had a surge in votes that put her on top. Then, election officials said they made a clerical error and that Hurd was still in the lead. At last report, Jones was trailing by about 1,100 votes but had indicated she would make sure all votes were counted and, if necessary, ask for a recount. According to the Dallas Morning News, Jones must pay for the recount, an expense that could amount to $100,000.

Two of the four House incumbents are now planning to run for leadership positions in the next session of Congress. Cicilline is one of two announced candidates now for the House leadership position of assistant Democratic leader. And Maloney is one of four candidates for chairman of the Democratic Congressional Campaign Committee, which oversees the party's efforts to elect Democrats to the House.

In the Senate, where the Democrats are in the minority, Baldwin is expected to hold onto her sixth-ranking position as secretary of the Senate Democratic Conference.

Although the outcomes of two Senate races are still in limbo — in Florida and Mississippi — Republicans have won enough seats to retain the majority and, therefore, control of confirmations to judicial seats. The importance of that role was underscored two days after the election when news emerged that U.S. Supreme Court Justice Ruth Bader Ginsburg had been hospitalized following a fall and suffered three fractured ribs. (She is now out of the hospital.) Ginsburg has been one of the court's strongest supporters of equal rights for LGBT people, unlike both of Trump's two Supreme Court appointees thus far.

But the wins by Democrats pushed them into the majority of the House, a development that brings some relief to the LGBT community, observers said.

In another important win for the LGBT community November 6, lesbian attorney Dana Nessel won her race to become Michigan's attorney general. Nessel beat her Republican opponent by 3 percentage points. She is the second openly LGBT person to be elected attorney general of any state. Maura Healey of Massachusetts was the first, in 2014.