Editorial: Mayor Breed should name Satya to SF school board 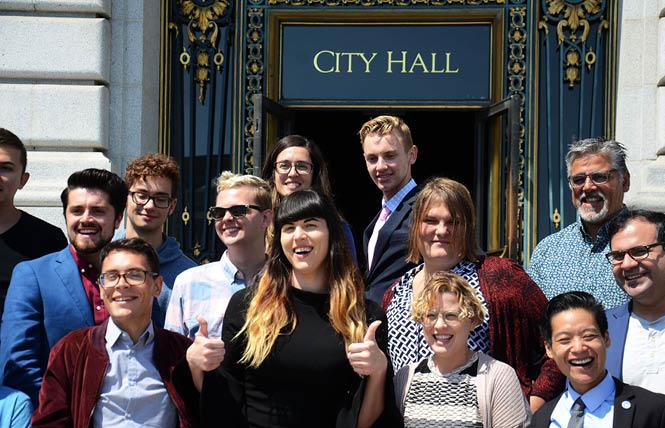 Mia Satya, center, was joined by supporters during her school board campaign. Photo: Rick Gerharter

Although Matt Haney was not San Francisco Mayor London Breed's preferred candidate for District 6 supervisor, his victory will give her yet another opportunity to appoint his successor to the school board. We urge her to appoint someone we believe would bring a fresh perspective to the board that oversees the San Francisco Unified School District: Mia Satya, a trans woman who fell short in her own campaign for one of three seats on that body last week.

At 28, Satya may be young, but that doesn't mean she lacks experience or ideas about how to make the city's public schools safer for all students, including LGBTs. Haney appointed her to the district's Quality Teacher Education Act Oversight Committee, which advocates for better teacher salaries. She was a member of the district attorney's Bye, Bye Bullying campaign and in that capacity did outreach to schools and judged student-produced public service announcements.

Queer youth are the largest cohort among young homeless people in San Francisco, and Satya ran her campaign in part to make sure the educational system includes and serves them. She has taught students how to become involved in their governance, registered them to vote, and empowered them. As a survivor of transphobia, homelessness, and hate crimes, Satya wants to advocate for trans civil rights. As most people know, President Donald Trump wants the opposite: no rights for trans people. The U.S. Department of Health and Human Services reportedly has a proposal that would limit the identification of a person's gender to include only "male" or "female" in accordance with their birth certificate. In 2017, Education Secretary Betsy DeVos rescinded protections for trans students that had been issued during the Obama administration. This year, she said her department would not investigate any complaints filed by trans students. In short, the federal government is hell bent on erasing trans people — students included.

Satya can provide a visible counter to the hatred emanating from Washington because she is the embodiment of San Francisco values.

We're not alone in advocating for Satya. Jordan Davis, a trans woman who sits on the city's Single Room Occupancy Task Force, wrote a letter to Breed last week asking for Satya to be appointed to Haney's seat.

"Mia would provide a perspective on the school board that is often missing, that of youth," Davis wrote. "She served on the youth commission and has been an effective advocate, not just for the LGBTQ community, but for racial and economic justice, as well as disability justice."

Davis framed her letter to the mayor to suggest that Breed could make amends with the LGBTQ community for endorsing transphobic school board candidate Josephine Zhao and not withdrawing her endorsement even after Zhao exited the race. (Zhao's name remained on the ballot, but she did not win one of the three open seats.) We, too, were disappointed that the mayor backed Zhao, and she definitely shouldn't be appointed to the vacancy. But by and large, Breed, who defeated gay former state Senator Mark Leno for the mayoral race in June, remains popular with a large segment of the LGBTQ community, as most people are willing to give her a chance to succeed. We've been impressed with her work so far.

This will be Breed's fourth appointment since she became mayor in July. All of her appointees have been straight allies: Vallie Brown to Breed's former District 5 supervisor seat, Ivy Lee to gay District 8 Supervisor Rafael Mandelman's former City College board seat, and Faauuga Moliga to the vacant school board seat following the departure of Hydra Mendoza-McDonnell. (Moliga, who was a candidate for the school board, won a seat last week so he will continue to serve on the body.) We say it's time for the mayor to appoint a trans person to fill the vacancy on the school board, because issues affecting trans students are front and center — and in today's political climate, there's a lot to fear from the federal government. Having Satya on the school board will give her a platform to speak out for students' welfare and against the discriminatory actions of the federal government.