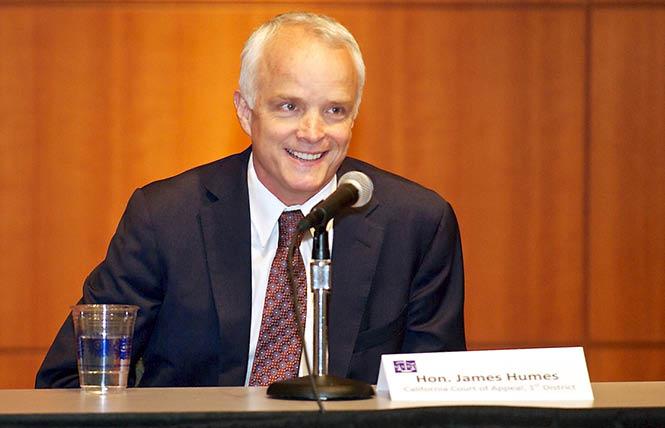 Voters retained two California Supreme Court justices and all of the appellate court justices on the November 6 ballot, including three out appeal court members.

One of the trio could become the first out LGBT community member to serve on the state's highest court, which currently has a vacancy. Outgoing Governor Jerry Brown has left the seat open for a year, raising questions on if he will name a successor to former Justice Kathryn Werdigar before he leaves office in January.

Governor-elect Gavin Newsom, currently the state's lieutenant governor, told reporters at a news conference Thursday in San Francisco while filling in for Brown, as he was out of the state, that Brown still has time to nominate someone to the court seat "unless he wants to leave it to me, which I'm happy to consider."

Humes had worked for Brown as his gubernatorial executive secretary and earlier as his chief deputy in the attorney general's office. He received nearly 76 percent of the vote in his retention race, according to the unofficial returns Friday.

Voters in the Second District Court of Appeal retained Appellate Justice Luis A. Lavin, as he received 71 percent of the vote. In 2015, he became his court's first openly gay justice when Brown named him to its Division Three. The Second District serves Los Angeles, Ventura, Santa Barbara, and San Luis Obispo counties.

And voters in the Fourth District Court of Appeal retained Marsha G. Slough, an out lesbian who is the first LGBT member of her appellate court. She received nearly 67 percent of the vote. Brown in 2015 appointed her to a Division Two seat on the court, which serves the southern California counties San Diego, Imperial, Orange, San Bernardino, Riverside, and Inyo.

All 50 appellate court justices who were up for retention votes this year won voters' approval to serve 12-year terms. They only appeared on the ballots in the counties covered by their appeal courts.

While the judicial retention races had largely flown under the radar, Corrigan had faced an attempt by LGBT advocates to knock her off the bench due to her dissent in the 4-3 majority opinion in 2008 that struck down the state's laws banning same-sex marriage.

While she had stated in her opinion that gay and lesbian couples should be able to call their unions marriages, Corrigan wrote that it should not be up to the court but the voters to decide if those marriages should come with legal recognition.

Another issue opponents of Corrigan raised was the persistent claims that she is a lesbian, and thus, betrayed her own community with her decisions in the marriage cases. Yet Corrigan has never publicly identified as being part of the LGBT community.

Kruger, on the other hand, captured a majority of yes votes in all but one of the state's counties. She received a majority of no votes — 3,500 against and 3,308 for — in Lassen County.

Former state lawmaker Nathan Fletcher, who left the GOP for the Democratic Party, won the race. According to the unofficial returns Friday, Fletcher received more than 65 percent of the vote. He was one of two Democrats to win seats on the board, which currently has all Republican supervisors.

"Your support catapulted us to a tremendous victory," he wrote to supporters Thursday, adding that he was "honored to once again have the privilege of waking up everyday with a single focus on improving the lives of others."

Lesbian Dr. Jennifer Campbell defeated her GOP opponent, incumbent Lorie Zapf, to win the District 2 San Diego City Council seat with 56 percent of the vote. She will join a new supermajority of Democratic council members, 6-3, who will have the power to override vetoes by Republican Mayor Kevin Faulconer.

Gay educator Kevin Beiser easily won re-election to his seat on the San Diego Unified School District board, on which he is currently serving as president. Gina Roberts, a transgender woman who is president of the San Diego chapter of Log Cabin Republicans, the LGBT GOP group, lost her second bid for a seat on the Valley Center Pauma Unified School District board against appointed incumbent Mike Adams.

Keep abreast of the latest LGBT political news by following the Political Notebook on Twitter @ http://twitter.com/politicalnotes . The column will be on a holiday break and return December 3.

Newsom taps out judge for appellate bench
Sign up!