After outcry, Tanzania backs away from LGBT crackdown 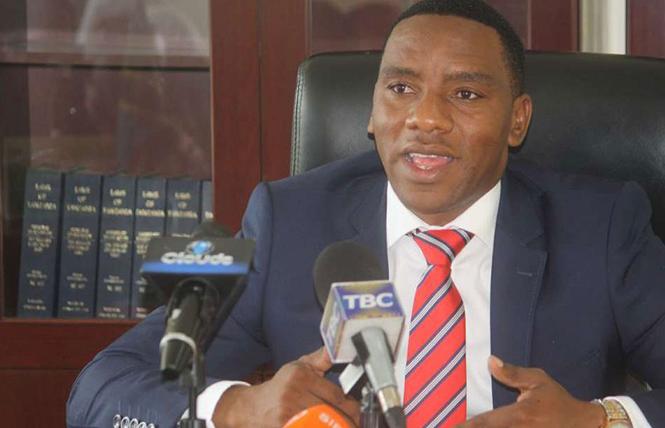 On the eve of expected mass arrests of LGBTs, the Tanzania government publicly backtracked after intense international pressure.

In a statement issued November 4, the East African nation's Ministry of Foreign Affairs distanced the government from Paul Makonda, regional governor of Dar es Salaam, who had stoked fear among the LGBT community for the past week and threatened mass arrests of suspected LGBT people.

"Makonda was only airing his personal opinion, which does not represent the official position of the United Republic of Tanzania," government officials said in a joint statement from the Ministry of Foreign Affairs and East African Cooperation Ministry.

The ministry vowed to uphold its obligations to international treaties and human rights, according to the statement.

Last month, during an interview on Dizzim TV, Makonda announced plans to form a surveillance force to identify LGBT people in the region.

During the interview, Makonda called on Tanzanians to report anyone suspected to be gay to him, and announced a hotline for people to call.

He said the roundup of LGBT citizens would begin November 5.

According to Amnesty International, 10 men were arrested in Zanzibar November 3. The men were allegedly attending a same-sex wedding when police, who were tipped off by the public, raided the party at Pongwe Beach.

Makonda reported he had received more than 5,700 calls and identified more than 100 suspected gays. He said that his 17-member surveillance squad would investigate and charge people if they proved to be queer.

The force would not only target LGBT citizens but anyone exhibiting sexuality considered to be abnormal or in possession of explicit sexual images, Makonda clarified at an October 31 news conference.

The squad was made up of police officers, psychologists, and film and communications regulatory authorities. They would analyze social media and mobile phones, searching for evidence of same-sex relationships and pornography and investigate alleged LGBT individuals.

Before the government backtracked, Makonda was defiant, warning Western nations not to "intimidate us."

"I prefer to anger those countries," he added, referring to Western countries that have laws protecting LGBT rights, "than to anger God."

Anti-gay sentiment on the rise
Homosexuality is illegal in Tanzania under colonial anti-sodomy law and is socially taboo, but until recent years the law wasn't enforced, LGBT Tanzanian activists told media outlets. Individuals charged with sodomy face up to 30 years in prison.

Makonda has been one of the most ardent foot soldiers for Tanzania's anti-gay campaign.

Neela Ghoshal, a senior LGBTQ rights researcher at Human Rights Watch, told NBC News that Makonda is known for being one of the most outspoken homophobic officials in the country.

"He is notorious for having essentially kicked off an ongoing two-year crackdown on LGBTQ people in Tanzania, starting in 2016," Ghoshal said. "There have been peaks and slower times in that crackdown, but it's been basically really bad."

Makonda has been behind other anti-gay crackdowns in Dar es Salaam. Last year, he threatened to publish the names of gay sex workers.

LGBT Tanzanians have been susceptible to routine abuse, blackmail, and assault or rape by vigilante mobs and police. Many are forced into survival sex work, connecting with clients online and through social media because they can't get jobs.

They add to the number of arrests of suspected gays that have been increasing over the past three years, according to media reports.

Last year, a Tanzanian woman was arrested after video of her proposal to another woman surfaced. In another instance, 12 men were arrested for allegedly promoting homosexuality.

Police are still searching for the woman who accepted the proposal, reported Gay Star News.

In 2017, 20 men were arrested attending an HIV/AIDS relief training seminar in Zanzibar, a resort island off the Tanzanian coast.

Many LGBT people in Dar es Salaam haven't slept in a week and are hyper sensitive to vigilantism, according to a gay activist who spoke anonymously to NBC News.

"There's so much tension within the gay community at the moment. Not just in Dar, but all over the country. We are really scared. We don't know what to do and where to go," a man identified only as Nathan, 24, told Reuters.

Michael, 19, a sex worker from Arusha who only went by his first name, told Voice of America that he hadn't left his house during the daytime for four days.

"I am scared to death," he said. "We have no one to protect us. We ask the United Nations and other countries to help us to go somewhere else where we do not have to hide in fear."

A gay Tanzanian living in California urged LGBT Tanzanians to go into hiding and to document everything to use to fight for their rights.

"My advice to all LGBT people, especially those one who are LGBT activists ... is to seek a safe place and go there as soon as they can. Their safety must be prioritized. Anything bad can happen in any moment," Geofrey Mashala told 76 Crimes.

To Western countries, he urged them to take in any Tanzanians who seek refuge and lobby on behalf of Tanzanians suffering human rights abuses.

"Put pressure against all these human rights violations that are happening in Tanzania. Make them know that a human being is a human being regardless their sexual identities or orientation. They all deserve dignity and all basic human rights," he said.

Fatma Karume, president of Tanzania's bar association and daughter of former Zanzibar President Amani Abeid Karume, is one Tanzanian publicly speaking out against Makonda's plan and in support of LGBT people to be treated equally under the law.

"Tanzania has a law against sodomy; it is not a law against being a homosexual," she told 76 Crimes. "I support everyone's right to equality before the law and that includes homosexuals."

"This could turn into a witch-hunt and could be interpreted as a license to carry out violence, intimidation, bullying, harassment and discrimination against those perceived to be LGBT," Bachelet said in the statement from her Geneva office November 2.

Citing the growing violence and harassment against Tanzanian LGBTs in recent years, she called upon the country's government to stand up for human rights of everyone and to adhere to international treaties signed in accordance with the U.N.

"Lesbian, gay, bisexual, and transgender people in Tanzania have already been subjected to growing violence, harassment and discrimination over the past two years," she said.

"I call on the government and all the people of Tanzania to stand up for the human rights of everyone in the country, regardless of who they are or whom they love" and to hold "accountable individuals who advocate hatred and discrimination as well as those who carry out violence," she added.

On November 5, the European Union called Ambassador Roeland Van de Geer, the head of the EU delegation in Tanzania, to Belgium for consultations.

"The EU regrets the deterioration of the human rights and rule of law situation in the country and will be conducting a broader review of its relations with Tanzania," EU officials said in a statement Monday.

The United States and the United Kingdom both issued travel warnings to Tanzania.

Last week the U.S. embassy in Dar es Salaam warned Americans — especially LGBTs — traveling to Tanzania to review social media accounts and advised them to remove anything that "may run afoul of Tanzanian laws regarding homosexual practices and explicit sexual activity."

Representatives of the Refugee Coalition of East Africa, an LGBT organization in Kenya, urged LGBT Tanzanians' to reach out to the organization.

US joins coalition to investigate Chechnya
The U.S. joined a coalition of 16 countries November 1 during an Organization for Security and Cooperation in Europe meeting in Vienna to invoke the "Moscow Mechanism" to investigate alleged human rights violations in Chechnya.

Representatives of Iceland invoked the mechanism on behalf of the coalition following multiple attempts by members to urge Russia to investigate the human rights violations of LGBT Chechens following reports of gross abuses that surfaced in April 2017.

"This has only deepened our concern that the Russian Federation is unwilling or unable to address the reports of serious human rights violations and abuses, which contributes to a climate of impunity for authorities in Chechnya," the November 1 statement from the Iceland representatives said. "We believe that the reported violations and abuses reflect a particularly serious threat to the fulfillment of the provisions of the OSCE human dimension."

"This action triggers a formal international fact-finding mission to look into reports of impunity for human rights violations and abuses in the Russian Federation's Republic of Chechnya," he said.

These violations and abuses targeted members of the LGBTI community, members of human rights, non-governmental organizations, and those the Chechen regime labeled, quote-unquote, terrorists, he explained.

The fact-finding mission will be comprised of up to three experts from the OSCE's Office of Democratic Institutions and Human Rights list. Their objective is to conduct a fact-finding mission and submit a report to the OSCE Permanent Council that can serve as a basis for further action, reported the Washington Blade.

The states that invoked the mechanism will select the first expert. Russia will have the option to choose the second expert. The third expert will be chosen by the first two.

If Russia declines to select an expert, the first expert selected will conduct a solo mission, reported the Blade.

The Moscow Mechanism was adopted in 1991 to provide OSCE's 57 member states with the option to send experts on a mission to aide member states in resolving human rights questions and issues, reported the paper.