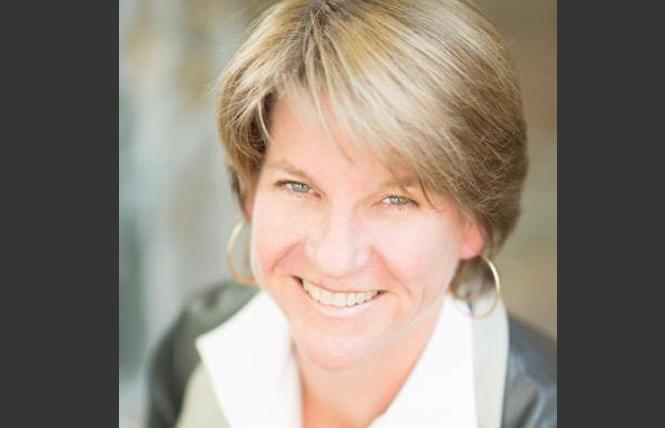 It was a mixed night Tuesday for the two out Peninsula council candidates looking to make LGBT political history in San Mateo County.

Residents on the Peninsula will see its first out city council member due to the victory of San Carlos City Council candidate Laura Parmer-Lohan, 51, the owner of marketing and consulting firm Ruckus Partners. She is part of a rainbow family that includes her wife, Kathy Parmer-Lohan, executive director of the San Carlos Education Foundation, and their two sons, Bradley, 16, and Gregory, 14.

But in Redwood City, Jason Galisatus, 24, lost his bid to become the first out gay man elected to a council seat in the county. In the race for three council seats in the city where he grew up, Galisatus landed in sixth place with close to 13 percent of the vote, according to the unofficial returns Wednesday morning.

Late Wednesday afternoon Galisatus acknowledged that he was unlikely to win as more ballots are counted.

"Despite this setback for me, we will not be deterred in fighting for our community, for our values, and for a welcome City," he wrote in a post on his campaign Facebook page. "From the bottom of my heart, thank you."

Like Galisatus, it was Parmer-Lohan's first time seeking public office. She took first place in her race for three seats on the San Carlos City Council with 27 percent of the vote Tuesday, according to the unofficial returns.

Jeffrey Baron will become the first LGBT person to serve on the City Council in Carmel-by-the-Sea. He took first place with 43 percent of the vote in his three-person race against two incumbent council members seeking re-election.

Baron, 54, and his husband, Kevin D'Angelo, bought a home in the coastal hamlet in 2005 and moved there in 2011 when they retired following successful careers in Silicon Valley. Having served on the city's Forest and Beach Commission for two years until 2016, Baron entered the council race in order to see that the needs of Carmel residents were addressed.

Monterey resident Tyller Williamson will also become the first out person to serve on his city's council. Williamson, 31, took first place in his race for two council seats with close to 33 percent of the vote.

He has lived in the area since 2010, having moved there for a job with the Naval Postgraduate School. He graduated from Cal State Monterey Bay in 2013 and is close to earning a master's of business administration from the naval school.

He was inspired to seek public office due to his working on Barack Obama's presidential campaigns, both in 2008 when he was living in San Diego, and again in 2012 when he served as the deputy regional field director for the Obama campaign in the Bay Area. It was during that campaign, while stationed in the San Francisco Obama headquarters, when Williamson came out as gay.

Jones, 25, had defeated Oglesby in their 2016 city council race, having been inspired to seek public office after working on Vermont U.S. Senator Bernie Sanders' unsuccessful presidential bid. But her tenure on the council has ruffled entrenched interests in Seaside and led to a series of controversies during the mayoral race.

Jones was accused of failing to file financial statements, which she insisted she had turned in but were lost by the city clerk, and faced questions about her travel and daycare spending while on city business. Her husband, Ryan Daniel Gibson, 26, who is also queer, was arrested just weeks prior to Election Day on accusations of domestic violence.

A city investigation into her claims of sexual harassment found no evidence to corroborate her claims and the report, released just days ahead of the November 6 election, revealed she refused to talk with investigators. Jones still has two more years in her council seat.

She had told the Bay Area Reporter she intended to serve out the remainder of her term. But she recently disabled her social media accounts, raising questions on if she will remain in office.

In nearby Watsonville to the north in Santa Cruz County, the two gay male candidates on the ballot both lost their races. Outgoing Watsonville District 4 City Councilman Jimmy Dutra fell short in his bid to be the first openly LGBTQ member on the county Board of Supervisors.

With Dutra termed off the Watsonville City Council this year, gay retired public school teacher Steve Trujillo had entered the race for the city's open District 7 council seat. But Trujillo, 65, who moved there about four years ago after his partner suffered a stroke and returned to Los Angeles to be near family, faced long odds of winning.