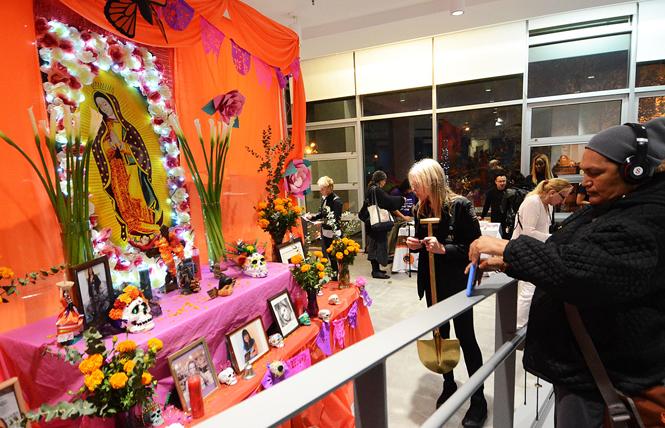 Bay Area residents will have an opportunity to commemorate trans lives lost to violence at Transgender Day of Remembrance events this month. There is no cost to attend, though donations will be accepted at most of the events.

On the Peninsula, the San Mateo County Pride Center is one of several organizations holding a TDOR event Wednesday, November 13, from 5 to 7 p.m. at the San Mateo Public Library, 55 West Third Avenue.

There have been approximately 22 known murders of trans people in the U.S. so far this year, according to the San Francisco Office of Trans Initiatives. Most of the victims have been trans women of color.

At Congregation Sha'ar Zahav in San Francisco, the weekly Shabbat service Friday, November 16, at 7:30 p.m. will include a TDOR observance.

Organizers said those whose lives have been lost will be mourned, as will recent threats to trans and nonbinary identities.

A member will offer a drash in recognition of this commemoration and in support of the transgender and nonbinary community at Sha'ar Zahav. All are welcome. The synagogue is located at 290 Dolores Street.

Also in San Francisco, Openhouse and the Lavender Youth Recreation and Information Center will hold a TDOR lunch Tuesday, November 20, from noon to 2 p.m. in the community room at 55 Laguna Street.

Organizers said that Openhouse elders and LYRIC young adults will come together for intergenerational storytelling.

Those who identify as a trans older person are welcome to attend. To RSVP, contact ffaircloth@openhouse-sf.org.

San Francisco will have a TDOR event November 20, from 5:30 to 8 p.m. The preliminary schedule calls for a candlelight march from City Hall, 1 Dr. Carlton B. Goodlett Place, one block away to UC Hastings, 50 Hyde Street, which is the site of the TDOR observance.

In Berkeley, the Pacific Center for Human Growth will hold its second TDOR — it took over last year for the event previously held in Oakland.

People are invited to the ceremony Tuesday, November 20, at 6 p.m. The center is located at 2712 Telegraph Avenue. At the event, there will be a reading of names of those killed this year to bring attention to transphobic violence.

That same night in San Jose, the Billy DeFrank LGBT Community Center and Westminster Presbyterian Church will hold a TDOR observance from 6 to 9 p.m. at the church, 1100 Shasta Avenue at The Alameda.

Formally observed each November 20, TDOR was started in the late 1990s in San Francisco by Gwendolyn Ann Smith, a trans woman who also writes the Transmissions column for the Bay Area Reporter. At the time, she wanted to call attention to the brutal murder of Rita Hester, a trans woman in Massachusetts. Smith started out with the online Remembering Our Dead project, which transitioned into TDOR and now includes events in cities across the country and overseas.

The city has engaged the Hawkins Company, an executive search firm, to assist in identifying and recruiting candidates for the librarian.

The community meetings are open to the public and will allow residents to share their thoughts about the qualifications, qualities, and characteristics that would make an ideal candidate for city librarian.

Sneak peek of Vietnam draft resistance film
Gay producers Christopher Jones and Bill Prince will screen the opening segment of their nearly-completed film, "The Boys Who Said No" Sunday, November 11, from 4 to 7 p.m. at Gough House, 2004 Gough Street in San Francisco.

The screening is being held to help raise funds to complete the project. A $50 donation is requested.

Directed by Oscar-nominated filmmaker Judith Ehrlich, the film tells for the first time how a youth-led nonviolence movement helped stop the war in Vietnam and end the military draft. Resisters organized what became the largest refusal to fight a war in American history, despite the risk of up to five years in federal prison.

Among others, the film features folksinger and activist Joan Baez and resistance leader David Harris, who married as they toured together against the draft. (The couple later divorced.)

The screening will feature two showings of the 25-minute opening segment, with special guests Harris and Ehrlich. Light refreshments will be provided. There will be a silent auction with items from Baez, the American Craft Whiskey Distillery, Stag's Leap Wine Cellars, and others.

Jones and Prince, who are a couple, said in a letter that they are "very proud" of the film that they have worked on for the last five years. Jones himself is a draft resister who served time in federal prison.

A second screening is planned for November 25 in Point Reyes.

To RSVP for either local event, or to make a donation, visit www.boyswhosaidno.com/events.

People can stop and visit six inns in the wine country town: Bella Luna, Calderwood, Camellia, Grape Leaf, Haydon Street, and River Belle. All will be decked out for the holidays. The buildings date from the late 1800s to early 1900s. Visitors will enjoy light refreshments and music.

A $5 donation or a canned food item for the Healdsburg Food Pantry allows entrance to the participating inns, which people can visit in any order.

For more information, visit the Healdsburg Chamber of Commerce and Visitors Center at www.healdsburg.com.

Get ready for Giving Tuesday
After fighting the Black Friday crowds and dealing with Cyber Monday, nonprofits want people to send them some holiday cheer (and cash) for Giving Tuesday, which takes place November 27.

One of those participating agencies is the San Francisco LGBT Community Center. In an email message, Danielle Siragusa, development director, said the center hopes to raise $10,000.

Contributions to the center will help its work with over 300 LGBTQ youth, 1,000 trans job seekers, and connect thousands of community members to vital services.

Giving Tuesday is a national day of action in which people are encouraged to donate to nonprofits.