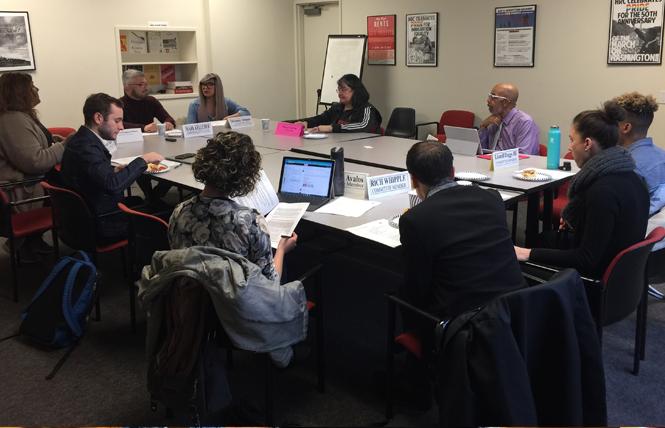 San Francisco is in the midst of an ambitious plan to collect sexual orientation and gender identity statistics, or SOGI for short. As we reported last week, several city departments have started collecting the data and have run into unexpected issues that staff are attempting to resolve. Despite the tongue in cheek cliche, we are not in a post-gay world. After all, the federal government, alt-right trolls, and religious conservatives all have us in their sights and would like nothing better than to erase us, whether that be via government data collection like the census or the Health and Human Services Department's proposal to limit the identification of a person's gender to include only "male" or "female" that is listed at birth. Even in San Francisco, we continue to experience incidents of discrimination and bias.

Over the last several decades, the San Francisco Human Rights Commission has worked hard to foster dialogue among city residents and investigate discrimination claims. It has long had an LGBT advisory committee to help inform the commission about everything from queer youth to Native American issues. Now, however, the vaunted committee finds itself at a crossroads, as it appears not to have members willing to put in the time.

Rather than getting rid of the advisory committee, we believe the panel should be rebooted and that qualified, committed members willing to serve on it can be found. Getting there is the issue. As we also reported last week, the advisory committee has met only twice this year, the last time in March. The panel, composed of community volunteers, held only three meetings in 2017. It is supposed to meet monthly except for June and December.

At first glance, it would appear that committee members are not serious about honoring the time commitment — and there is probably some truth to that. But the SF HRC, which selected the advisory committee members, does make the obligations clear to prospective members. If people are chosen for the panel and then don't show up, that's just the way it goes, right?

SF HRC staffer David Carrington Miree's weak excuse that the advisory committee's meeting requirements were too onerous dumbfounded us. Because it's an official city-sanctioned committee, there is a residency requirement for members, an absenteeism policy, and restrictions on meeting times. That shouldn't surprise anyone, and we're glad those requirements exist. A city committee can't just meet anytime it wants to. Meetings must be scheduled for noticing and other obligations to allow public participation. Miree made it sound like the requirements were to blame, not the failure to comply with them. That's ridiculous.

The advisory committee is made up of 12 members whose role is to advise the Human Rights Commission. Since its establishment in 1979 (or 1975, depending on which section of the website you're viewing), it has indeed participated in important milestones of LGBT visibility. According to a history on its website, the committee organized a commission public hearing in 1984 on racism in the lesbian and gay community and published a report on the findings and recommendations. In 1985 it organized a commission hearing on discrimination against people living with HIV/AIDS. Following that hearing, the Board of Supervisors passed protective legislation.

In 1989, the committee organized a commission hearing on domestic partnerships and alternative families and published a report. That led to the supervisors passing legislation establishing the city's domestic partner registry. In 1994, the panel organized a commission public hearing on discrimination against transgender individuals and published a groundbreaking report. The supervisors later approved legislation adding gender identity as a protected category in the city.

In more recent years, the advisory panel has held a hearing on the federal blood ban for men who have sex with men and held community meetings to study bisexual invisibility. Ironically, the committee itself now seems invisible and it would be a shame if it were to disappear because of a lack of interest from the public.

One bright spot in exposing this ghost committee is at least one commissioner's desire to see the panel revamped. It seems that the advisory group had little incentive to prioritize and agree on specific goals. As lesbian Commissioner Susan Belinda Christian told us, she would like to see the advisory panel work closer with the commission, the LGBT community, and nonprofit and other queer organizations. That appears to be the way the advisory committee used to operate.

Perhaps the panel's current problem is a recruitment issue, as it has functioned for many years up until recently, and past members have included noted LGBT activists. HRC's staff was delinquent in not proactively addressing the problem; it also should have sounded the alarm sooner to alert the LGBT community. As it stands, the advisory committee hasn't done meaningful work for nearly two years.

Right now, SF HRC plans to recruit members for next year. But, before that happens, maybe it would be a good opportunity to totally redefine the advisory committee's purpose and recruit appropriate members. That way, interested people would know what to expect. If there is no plan in place, we fear the advisory panel will just linger in obscurity in 2019 like it did in 2018 and 2017.

Or perhaps the advisory committee should be replaced with an LGBTQ commission, which could be under the purview of the Human Rights Commission or the Office of Trans Initiatives, whose role likely will soon be expanded to include lesbian, gay, and bisexual issues as well. There is already talk about the office, currently headed by Clair Farley, a trans woman, coordinating various initiatives called for in the city's LGBTQ cultural strategy.

Regardless, one thing seems clear: the LGBT advisory committee needs to find a purpose and recruit members who are committed to it.