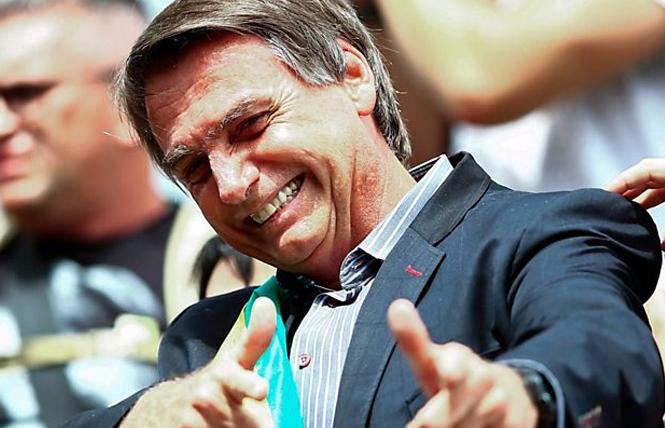 The first round of voting was October 7. Bolsonaro emerged in first place out of a field of 13 candidates. In Sunday's runoff, Haddad received 45 percent of the vote, according to media reports.

BBC reported that some experts said it was "inaccurate" to compare Bolsonaro, a far-right former army captain turned seven-term congressman, to President Donald Trump. They liken him being more akin to Philippines President Rodrigo Duterte.

Celebrations and protests broke out in Brazil's streets and on social media following Bolsonaro's win.

"This is a really radical shift," Scott Mainwaring, a professor at Harvard University's Kennedy School of Government who specializes in Brazil, told the Times. "I can't think of a more extremist leader in the history of democratic elections in Latin America who has been elected."

Marta Dalla Chiesa is a 52-year-old lesbian, who owns Brazil Eco-Journeys with her wife, Lesley Cushing.

"It is a terrible blow for democracy in Brazil. He represents the worse of Brazilian politics: a defender of torture, dictatorship, a racist, misogynist, and a homophobe," wrote Dalla Chiesa in an email interview with the Bay Area Reporter Monday. "We basically went back 30 years, in all senses, in one night."

LGBT Brazilians are fearful of what the future holds for them.

Bolsonaro takes office, along with the new Congress dominated by elected conservatives, January 1.

Bolsonaro's Social Liberal Party took 52 seats in the Chamber of Deputies, a sweeping number compared to the single seat the party held before the election. Haddad's Workers' Party took 57 seats. The chamber, Brazil's lower house in Congress, has 513 seats total.

In the upper house, SLP also took four of the 81 Senate seats.

A record 30 parties will represent Brazil in the next Congress, reported BBC.

The White House and the State Department congratulated Bolsonaro on his victory.

Trump was one of the first world leaders to call Bolsonaro to congratulate him Sunday, following the election. He praised Bolsonaro again Monday morning in a tweet.

"Had a very good conversation with the newly elected President of Brazil, Jair Bolsonaro, who won the race by a substantial margin. We agreed that Brazil and the United States will work closely together on Trade, Military and everything else!" tweeted Trump.

Secretary of State Mike Pompeo called the president-elect late Monday morning.
In a statement from Heather Nauert, the department's spokeswoman, summarizing the phone call, she noted the U.S. and Brazil's "vibrant partnership."

As the "largest democracies and economies in the world," she stated, the two countries would work together "to address the 21st century's most pressing global and regional challenges" based on their "mutual" commitment to "promote security, democracy, economic prosperity, and human rights."

Bolsonaro was perceived as the least likely candidate to become president of South America's largest and most populous country. However, economic hardship, widespread violence, and political corruption and scandal all aided his rise to power, and he rode a wave of discontent.

Backed by longtime military supporters, evangelicals, and agribusiness leaders, he armed himself with an unconventional campaign style using social media and instant messaging services. He used these channels to spew his angry vitriol and turned a personal crisis — a life-threatening knife attack during a campaign rally September 6 — into political gold.

Brazilians rebelled against the current state of their nation. Despite being a country that is majority non-white, Bolsonaro's campaign wasn't damaged by his extreme views.

"We cannot continue flirting with socialism, communism, populism, and leftist extremism," Bolsonaro said in his acceptance speech, translated by Global News. "We are going to change the destiny of Brazil."

The Guardian reported that he has openly proclaimed, "Yes, I'm homophobic — and very proud of it."

Brazil's president-elect has the power to undo years of hard-fought rights that are supreme court rulings but were never codified into law, Maira Reis, a 35-year-old lesbian who lives in Sao Paulo, wrote in an email interview with the B.A.R. Monday.

Sunday night she took to Instagram, speaking out against Bolsonaro's election.

"Bolsonaro has made his entire campaign based on lies about the LGBT+ community," wrote Reis, who is a journalist and founder of Camaleao.co.

Camaleao.co is a company that connects LGBT talent with employment opportunities.

One of the biggest falsehoods about Brazil's LGBT community from Bolsonaro's campaign was about a so-called gay kit to teach about homosexuality in schools and convert kids into being gay, she wrote.

"It's a lie! This material never existed," wrote Reis.

Bolsonaro's repeated allegations caused the ministry to issue a statement that the kit did not exist and that the government never bought the sex education book that included a single page on same-sex relationships.

The claim was an evolution of one of Bolsonaro's anti-gay beliefs.

He told bisexual British broadcaster and writer Stephen Fry in 2013 that "homosexual fundamentalists" were brainwashing straight children to "become gays and lesbians to satisfy them sexually in the future."

The electoral courts even banned Bolsonaro from using the anti-LGBT rhetoric on his campaign materials.

It didn't stop the inflamed hate toward Brazil's LGBT community. Nor did it stop Bolsonaro from making the claim again right before Brazilians went to the polls, wrote Reis.

His anti-LGBT rhetoric has fueled and fanned the flames of hate that has been a longtime reality for Brazil's LGBT community. However, Bolsonaro's "brazen bigotry" has sparked a "new era of brutality and threats," reported the Guardian.

In a 2015 report, "Violence Against LGBTI Persons," the Inter-American Commission on Human Rights found the number of LGBT deaths in Brazil "far surpass the number of killings reported in any other OAS member state." Researchers said that the high number could be attributed to the country's large population, new reporting mechanisms, and the high number of transgender women who work as sex workers who are killed by their clients.

IACHR is one of the autonomous bodies of the Organization of American States overseeing the promotion and protection of human rights in the Americas.

Five years ago, Bolsonaro told Fry that a "majority of homosexual deaths" were related to drugs, prostitution, or "even killed by their own partners."

He went on to compare Brazilians favorably against the Taliban and Iranians, claiming that Brazilians don't hunt down and kill gays.

"We don't persecute and hunt homosexuals," said Bolsonaro. "I think Brazil is pretty open, we're not Iran where you're condemned to death."

"Like in the U.S., he brought out the worst in people," Dalla Chiesa wrote, referring to Trump's anti-LGBT rhetoric. "Extremists came out of the closet because he empowered them. We are hearing people say openly racist and homophobic things as if it was perfectly acceptable."

"For many LGBT people the sensation is of entering a fascist government that, at any minute, can literally give permission to kill us on the street and we will not even have the right to ask for help," wrote Reis.

Bolsonaro advocated for violence against his opponents, promised to stop all "activism" in Brazil, and he will have payback to his supporters, Dalla Chiesa wrote.

During Bolsonaro's campaign he turned up his homophobic rhetoric and promised to reverse many of the rights LGBT activists gained during the past decade, Dalla Chiesa and Reis wrote.

Both women wrote there were enough conservatives entering Congress that could vote to undo every pro-LGBT legal gain.

"Rights will diminish, for sure. All the decisions pro-LGBTQI rights in Brazil have been taken by the supreme court," wrote Dalla Chiesa, noting that there are already proposals against LGBT rights currently in Congress that haven't been approved.

"Our president is saying that he will now end the 'privileges' for minorities," wrote Reis. "I did not know that creating a space of inclusion, diversity and where everyone feels good being who they are would be 'privilege.'"

Fighting back
Reis wrote that Brazilian LGBT activists are fighting back.

"There is a sphere of fear yes, but it also has another side of resistance, union, and connection," wrote Reis. "The Brazilian LGBT community has been organizing to fight against this."

"We will have a very intense struggle so that we do not lose what has already been achieved, with great probability of actually losing," she added.

"We hope that the international community keep an eye on what is going on here and help us when we need it," she wrote.