Guest Opinion: We will not be erased! 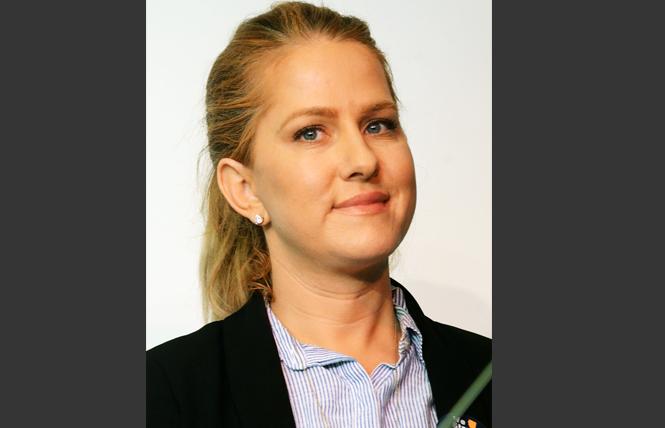 Last week the New York Times exposed yet another attack by the Trump administration on transgender and gender-nonconforming (TGNC) Americans by calling for the Department of Health and Human Services to redefine sex for the purposes of Title IX. This new definition states that, "Sex means a person's status as male or female based on immutable biological traits identifiable by or before birth." The breadth of this change could be astonishing as it is calling on federal agencies to strip away trans anti-discrimination protections in education, employment, and health care. However, no administrative definition can overrule consistent federal court findings that TGNC people are included in the federal definition of sex. Currently, these federal court decisions protect us from discrimination through federal civil rights laws.

This past week, TGNC communities and allies have mobilized nationwide to call out the administration for its hateful and devastating attempt to score political points with this HHS memo just weeks ahead of the election. The Trump administration was hoping this would scare and energize its base with drummed up caricatures of "angry liberal mobs" by wielding transgender lives as one of its featured wedge issues. However, TGNC communities, allies, political leaders, scientists, educators, and legal and medical experts have shown a united front in declaring that trans people #WontBeErased.

This is not the first time that the administration has brandished wedge issues to gain political points. We have seen this administration's ongoing political and cultural attacks against communities of color, immigrants, women's rights, and trans and LGBTQ communities even before President Donald Trump's campaign started. We have learned from this history that showing up is only a part of the struggle for justice.

One of the best ways to defeat these fearmongers is to make our voices heard at the ballot box on Tuesday, November 6.

A call to action
To all trans communities, you are part of San Francisco and you will never be erased. Many of us are scared right now, and know that you are not alone. Our community is resilient and we have always pushed for a better tomorrow. Our elders didn't back down at Compton's Cafeteria and we will not give up now.

All of us in support of TGNC lives and who are able to should make our voices heard November 6. Make our statement to the Trump administration that we #WontBeErased. And voting is just the beginning. Here are additional actions we can take for trans rights (the following actions were posted in part by American Civil Liberties Union):

1. Bring attention to Question 3 in Massachusetts. This ballot initiative in Massachusetts asks voters whether to retain or repeal non-discrimination protections for transgender and gender-nonconforming communities. In San Francisco, we will hold any state accountable that passes anti-LGBTQ laws through our 12X legislation that bans travel and contracting with a covered state.

Action: Contact your networks in Massachusetts and talk to them about the importance of trans equality.

2. Get out the vote. The midterm elections aren't just about the future of the Congress. They are also about state legislatures, state courts, city council races, and local school board elections.

Action: Not only should you vote, help get out the vote with your family, friends, and neighbors. Visit http://www.vote.org for more information. Also, help spread the word of trans candidates running for office across the country.

3. Support trans-led organizations. Most national and larger local organizations are not TGNC-led, resulting in lack of prioritization of our needs.

Action: Donate time and resources to local and national trans led organizations such as Trans Lifeline, where calls to its suicide prevention hotline have doubled since the Trump administration memo was released last week.

4. Get involved and support your local Trans Day of Remembrance and Trans Week of Awareness events this month. Already in 2018 there are 22 known murders of trans people, primarily trans women of color. We all need to do more to raise trans visibility and end the senseless violence against trans people.

Action: Volunteer to support community actions during Trans Awareness Week such as your local Trans Day of Remembrance event. Prioritize and take leadership from trans women of color.

5. Attention allies: Call friends and family to have conversations about trans rights. Educate yourself to make sure you're challenging the notion of the gender binary and the federal government's definition of "biological sex." Make sure your family and friends understand that trans liberation is an integral part of the LGBTQ community.

Action: Call or text three cis people in your life about a measure they can take to support trans/GNC people.

6. Pay attention to the notice and comment periods on proposed federal regulations.

Action: follow legal organizations for updates on when you're able to add your comment on the proposed change. They will give you template and talking points. For this new measure, the ACLU expects the comment period to be in the next two months.

7. Support TGNC journalists, and make sure our major newspapers and media outlets are doing the same thing.

Action: Follow TGNC journalists and promote their work. Also, sign up for a mentoring program to support trans and LGBTQ youth and adults.

Also join us for a community conversation at the Commonwealth Club Monday, November 5, at 110 The Embarcadero to learn about additional strategies. There is a reception at 5:30 p.m., followed by the program at 6:30. The event is free. For more information, visit https://bit.ly/2SqoCT7 or follow us at @TransCitySF or email us at TransCitySF@sfgov.org.

Clair Farley, a trans woman, is the director of the San Francisco Office of Transgender Initiatives. Follow her on Twitter at @ClairJoyFarley.