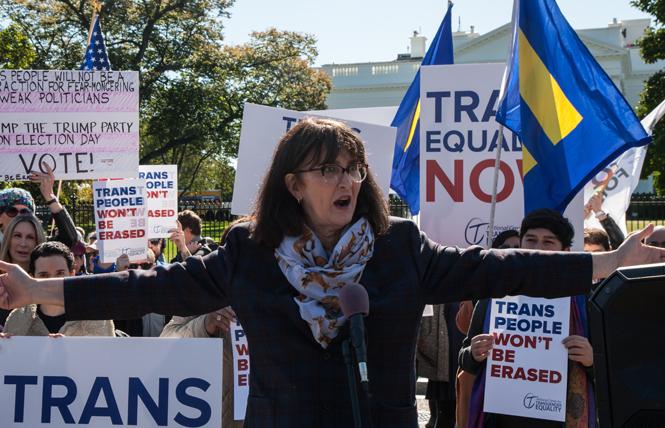 San Francisco Mayor London Breed Thursday morning ordered all city agencies and departments that collect demographic data to update their forms, both paper and electronic, so that they include the option of nonbinary in addition to male and female when asking about gender identity.

The mayoral directive, which took effect immediately, also ordered that the forms expand on title options beyond Mr. and Ms. and include additional choices for pronouns other than just she/her/hers and he/him/his. The forms must also include a line for a person's chosen name and use gender-neutral labels such as "parent/guardian" instead of "father" and "mother."

The order by Breed came in response to media reports earlier this week that the Trump administration is preparing a proposal to limit the identification of a person's gender to include only "male" or "female" that is listed at birth.

"Identity is complex and personal," Breed noted at the start of the directive, a copy of which was given to the Bay Area Reporter Wednesday. "Too often, transgender and gender-nonconforming communities are forced to make choices on City and County of San Francisco forms and applications which do not accurately reflect their identity or gender expression. We know that narrow gender definitions of either male or female are not sufficient to recognize the diverse experiences of our communities."

As the B.A.R. detailed in a three-part series last summer, six city departments began using forms in 2017 that asked questions about sexual orientation and gender identity, SOGI for short, due to a law implemented by city leaders. LGBT advocates had pressed for the collection of such data to gain better insight into the health needs and other issues confronting the LGBT community.

The information, they argued, was needed in order to ensure there was adequate funding for programs and services that address the needs of the LGBT community. State lawmakers followed suit by also ordering a number of California departments and agencies focused on health care and social services to begin collecting SOGI data as of this July. Additional state agencies will begin asking the SOGI questions on their forms next year.

In her directive, Breed noted that the San Francisco sheriff's office has also "taken the lead in expanding self-identification of gender identity, by allowing individuals to self-identify, and has instituted gender awareness training as an integral part of its practices."

As part of her directive, Breed ordered the city's Department of Human Resources and the Office of Transgender Initiatives to provide gender identity trainings to city employees as part of their required trainings on harassment prevention, implicit bias, and cross-cultural communications.

The city has adopted various policies to promote "inclusionary practices," noted Breed. "However, to be truly effective, we must strive to practice inclusivity at all times and to assure that everyone can live as their authentic self. Something that may appear to be a single city application or form, but does not account for the full range of self-identifiers, can trigger an emotionally stressful experience for individuals who do not fall into narrow, pre-set identity categories."

Breed's directive is the polar opposite of the proposal being considered by the Trump administration, which was first reported by the New York Times Sunday, October 21. LGBT advocates contend the proposal, if enacted, would erase transgender people from federal recognition.

Transgender legal and community leaders and LGBs reacted swiftly and harshly this week to the proposal. A rally was held in Washington, D.C. Monday, where people gathered in front of the Human Rights Campaign's offices and marched to the White House.

Keisling addressed the crowd at Monday's march, and held up a list of trans people who said they "wouldn't be erased."

In San Francisco, Breed and Clair Farley, director of the city's transgender office, released a joint statement condemning the president and his administration.

"This is a bigoted and hateful attempt to strip away over two million transgender people's equal access to health care, housing, education, and fair treatment under the law," they said. San Francisco will continue to resist draconian attempts to strip away human rights, by joining local and statewide efforts to ensure that our laws, policies, and programs reflect the lived realities of transgender and gender-nonconforming communities."

Breed, who was sworn in as San Francisco's 45th mayor in July, told LGBT community leaders at a reception Monday that "just yesterday, that other 45 announced another attack on our transgender community," referring to President Donald Trump.

Kris Hayashi, executive director of the Oakland-based Transgender Law Center, said in a statement that previous court rulings "have made clear that transgender and gender-nonconforming people are protected from discrimination under federal civil rights laws and the U.S. Constitution."

"To be clear: nothing this administration can do will undermine the scores of federal courts that have recognized our humanity and hundreds of state and local legal protections we've already won," Hayashi added.

"Trump is too late," she said in a statement. "We are not going back to a time when transgender people were in the closet, were ignored, or excluded. As a society and as a community, we have already moved on. We are here and not going anywhere."

Equality California Executive Director Rick Zbur said the Trump administration "has launched a full-scale war against millions of transgender and gender-nonconforming people across our nation by proposing sweeping new regulations across our government that would require discrimination."

As Trump was preparing to board Marine One on the White House lawn Monday afternoon, reporters asked him what happened to his promise to protect transgender Americans.

Steps taken
The Trump administration has taken a number of steps aimed specifically at ending recognition of transgender people under federal law.

In July 2017, Trump announced his plans to ban transgender people from the military. Last October, Attorney General Jeff Sessions issued a memo to declare that federal law prohibiting discrimination based on sex in employment does not prohibit "discrimination based on gender identity, per se." Last December, reports emerged that the Trump administration banned budget documents from the Centers for Disease Control and Prevention from using the word "transgender." At HHS, the administration removed from at least two federal health surveys questions that would identify data specific to LGBT people. It also announced it would no longer interpret the Affordable Care Act to prohibit discrimination based on gender identity.

Serevino was apparently referring to a federal district judge's ruling in Forth Worth, Texas, in August 2016. The judge issued a nationwide injunction against the Obama administration's "Dear Colleague Letter on Transgender Students." The letter said Title IX "encompasses discrimination based on a student's gender identity...." The judge said, "It cannot be disputed that the plain meaning of the term sex as used in [Title IX] meant the biological and anatomical differences between male and female students as determined at their birth." But in applying the injunction nationwide, Judge Reed O'Connor added that litigation of the issue in other federal courts should proceed and that states that do not want to be covered the injunction "can easily avoid doing so by state law...."