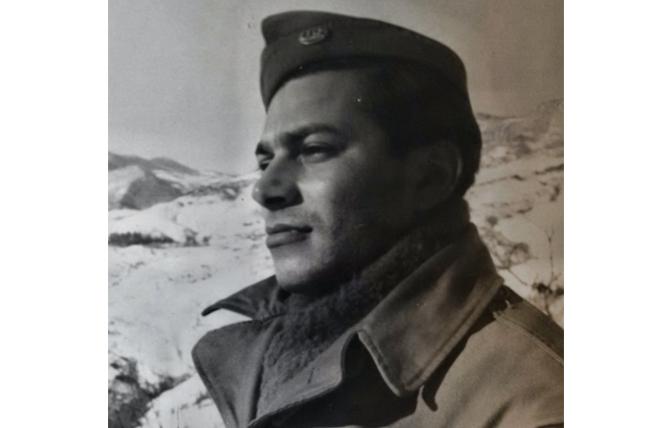 Gay Games co-founder Paul Mart packed about as much talk, action, enthusiasm, passion, and courage as humanly possible into a diminutive frame and an active mind. My conversations with him never really ended — they just drifted off as life and events separated us for months at a time until the next intersection, conversations ranging from past victories and defeats to future dreams and goals. But now the conversation is stilled forever, as this remarkable soldier, pitchman, athlete, and stuntman has passed away.

Mr. Mart, a gay man, died of natural causes in his sleep Thursday, October 18, in his Palm Springs home at the age of 100.

Mr. Mart was a Hollywood stuntman, rode in rodeos, and was an undercover agent during World War II. During his involvement with the Gay Games, he would pepper his conversations with fellow volunteers with war and travel stories.

Federation of Gay Games Co-President Joanie Evans discovered this when she met him at an annual meeting in 2013.

"He told me a story of when he was part of a group of American soldiers stationed in London to learn about our code system and he met Winston Churchill, who told him he was doing a great job," Evans said. "Wherever you were from, Paul had a story — and you were lucky if it was a short one."

Indeed. When I spoke with Sara Waddell Lewinstein, a board member from Gay Games I and the widow of Gay Games founder Tom Waddell, I teased her about how much she and Mr. Mart both talked and asked her who talked more.

"It depends on the subject," she said with a laugh. "If it was something about the past, it was Paul."

"He will be sorely missed," she continued. "He was the first ambassador for the Gay Games. He would travel for his work, or on his own dime, all over the globe and talk up the Gay Games — and he was always insistent on getting women involved. If it weren't for Paul, the Gay Games wouldn't be the international event it is today."

Said close friend and former FGG president Gene Dermody, "He was an inspiration. He could get on people's nerves sometimes, but that's how you get things done and create real change. He was so tough, but I'm glad he died in his sleep and did not suffer."

Mr. Mart, Waddell, and Mark Brown were the first organizers of the 1982 Gay Games.

"He was a fine man," Brown said. "He was in charge of international outreach and he did a great job. He was able to recruit for the games to bring athletes from overseas, and that was not an easy thing to do back then."

"Paul's vision and mine was to have the Gay Games reach all parts of the world," said Derek Liecty, who served as a volunteer soccer official in Gay Games I. "He spread the word far and wide, especially in areas that were underrepresented in the Gay Games. His initial work in outreach ultimately led to the formation of the Gay Games scholarship fund, which has been responsible for bringing so many athletes from around the world to the Gay Games."

Doug Litwin, marketing officer for the Gay Games, met Mr. Mart when he attended his first FGG meeting in Berlin in 1999.

"Paul was a fixture at those meetings, always sitting in the front row," Litwin said. "He was very active in these discussions, chiming in on many issues and occasionally getting off-topic. I witnessed many times how people reacted when they first met Paul. I could tell by the looks on their faces that they were probably thinking, 'Who is this crazy old man and what the heck is he talking about?' If those people didn't do a bit of homework and get to know Paul better, shame on them. They would have discovered that Paul Mart was a true living legend, and that the 'war stories' he was constantly talking about were actual war stories. While Paul's work to help create the Gay Games with Tom Waddell and others was truly heroic, it really pales in comparison to some of the amazing things he achieved during World War II. The good citizens of France, Britain, and USA owe Paul huge amounts of gratitude and he was so honored by those governments."

Mr. Mart was honored by the FGG with the inaugural Tom Waddell Award, the highest honor the FGG gives to volunteers and activists in the Gay Games mission. He was honored for his military service with two Purple Hearts and the Silver Star.

Me? I was honored just to know the guy, just to talk with him. Or rather, to hear him talk. He may have been a little guy like me, but his legacy loomed larger than life. That's a debt we repay only by carrying on his work.