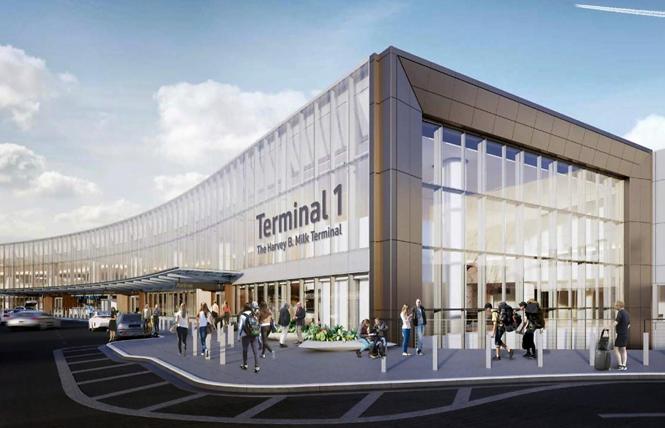 A fight about font sizes is breaking out over the proposed signage for the San Francisco International Airport terminal named after the late gay Supervisor Harvey Milk.

Renderings released last week by the airport showed the proposed sign for the facade of the Terminal 1: The Harvey B. Milk Terminal. Those arriving to the terminal would see a prominent sign for Terminal 1 with Milk's name below it in a smaller font size.

The image, which ran on the front page of last week's Bay Area Reporter as well as in other news outlets, prompted gay former supervisor David Campos to register a complaint. The proportions of the text should be flipped, he told the B.A.R.

"I am really frustrated. It appears they are really trying to minimize Milk's name on the terminal," said Campos, now a county deputy executive in Santa Clara County. "The law we passed was to make this the Harvey Milk Terminal. If you look at the proposed design, it is really still Terminal 1. It should be the Harvey Milk Terminal; I don't know if Terminal 1 even needs to be there."

In 2013, Campos proposed naming the entire airport after Milk, who in November 1977 became the first out elected leader in San Francisco and California. Due to lukewarm support for the idea, Campos worked out a deal with the late mayor Ed Lee to instead name one of the airport's four terminals in honor of Milk, who was killed by an assassin's bullet after less than a year in office.

An advisory panel last year selected the under renovation Terminal 1 as the best choice, leading to city leaders approving the selection earlier this year. The legislation called for the city's arts commission to approve the designs of the various elements of the terminal renaming, which it did over the summer.

The proposed signage is to be submitted to City Hall for final approval by December 1. District 9 Supervisor Hillary Ronen, who succeeded her former boss Campos on the board and carried the naming resolution this spring, is planning to hold a hearing on the Milk terminal elements the week of December 3.

She told the B.A.R. this week that she shares Campos' concerns about the exterior signage for the terminal.

"I agree with David Campos; the discrepancy between the two fonts is too big," Ronen said. "They need to come back to us with something different."

During a tour of the facility this summer with airport officials, including director Ivar C. Satero, Ronen said she expressed misgivings about having Milk's name in smaller lettering than that of the terminal's number.

"When I toured the terminal with the airport staff to find out everything about how they were going to implement the naming of the terminal, this was one of the things I mentioned to them. I felt the font should be switched, or at least more similar," said Ronen. "I commented on the fact Terminal 1 was very large and the Harvey B. Milk Terminal was very small."

District 8 Supervisor Rafael Mandelman, the lone LGBT member of the board who holds the seat considered to be Milk's as it includes the gay Castro district, also expressed misgivings about the proportions of the proposed signage.

"I am concerned based on the rendering I saw," Mandelman told the B.A.R. this week. "Milk's name needs to be clear, bold, and prominent."

The reason Ronen was given for the different font sizes had to do with ensuring non-English speaking travelers could still easily navigate through the airport and not be confused.

"What Ivar told me is that wayfinding in airports, especially for people who don't speak the same language, is a very particular exercise and craft that has a standard kind of methodology to it," she said. "They had to have Terminal 1 very prominent because that way is the standard methodology for airport wayfinding. I said, 'OK, I get that. I would still like to see the font be more similar to one another.' We left it at that and moved on to other aspects of how they were going to depict Harvey's legacy at the terminal." 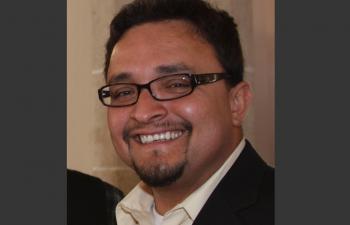 No change planned
SFO spokesman Doug Yakel told the B.A.R. this week the airport does not intend to change the look of the terminal facade signage.

"While we respect that there are a variety of viewpoints on how best to honor Harvey Milk at SFO, we believe the designs unveiled last week capture the intent of the Board of Supervisors' legislation," stated Yakel in an emailed response to questions. "These designs acknowledge that our airport serves a global customer base of 57 million annual passengers, inviting visitors and travelers alike to successfully navigate through our airport, while providing the opportunity to learn about and celebrate the life and legacy of Harvey Milk."

As the B.A.R. first noted in a story in September, in addition to the terminal signage there will be an interior photographic display honoring Milk's legacy and the fight for LGBT rights. It will be in an area the airport is calling the Central Inglenook and utilize photos the airport has asked the public to submit.

It has consulted with the GLBT Historical Society on the project. But Executive Director Terry Beswick told the B.A.R. last week that the nonprofit archival group was not asked for its input on the exterior signage.

"It did strike me when I saw that," Beswick said about the differing proportions for the terminal name. "I thought it must be the airport trying to make sure people don't get lost. My guess is it probably is a practical thing. I hope they make an effort to get people and the community to refer to it as the Harvey B. Milk Terminal."

The permanent exhibit, signage, and several art pieces honoring Milk are to be unveiled in February 2020, according to the airport's current timeline. A temporary exhibit is set to debut next July, when passengers return to the terminal due to the re-opening of the first nine gates in Boarding Area B, and remain up through May of 2021.

The cost for the overall architectural components is $1.5 million, according to the airport. A lighted art piece to be mounted curbside at the Milk terminal is budgeted at $850,000 and another artwork to be installed in the terminal's three-story atrium is budgeted at $1.1 million.

"Designs include both interior and exterior treatments, threshold areas, and exhibits honoring Harvey Milk," stated Yakel. "We are especially proud to partner with our communities, through a crowdsourcing campaign, to develop the image content that will go into a central exhibit telling the story of Harvey Milk and his impact on the Bay Area and beyond."

Ronen said this week that she had also pushed the airport and the city's arts commission, which signs off on the art pieces to be installed in the terminal, to ensure they instructed artists that the works needed to be inspired by Milk. A number of artworks have already been approved for Terminal 1 that do not have anything to do with Milk as part of the facility's $2.4 billion remodel set to be completed in late 2022.

"I was impressed with the artistic sort of areas in which they are going to place the photographic remembrance and history around Harvey and the struggle he led. But we are fighting tooth and nail to make sure every piece of space and art that has not already been contracted out before the completion of the terminal in some way pays tribute to Harvey Milk," said Ronen. "That has been a struggle, and I made clear in no uncertain terms that is what I expect. I am starting to see a change in tone from the arts commission and airport in making sure that happens. For example, there is one more major art piece and lighting contract to go out."

Airport officials said last week that a call for artist submissions for both pieces should be announced in December. An earlier request for proposals for the lighted artwork that was sent out in June by the arts commission stated that "artists may also be inspired to see this project as an opportunity to respond to the legacy of Harvey Milk, by bringing light, both physically and metaphorically, into this space that is one of the first welcoming experiences to residents and visitors alike as they arrive in San Francisco."

Ronen stressed she is not trying to prescribe what the artists do but wants to ensure their work is influenced by Milk and pays tribute to the global LGBT icon.

"I am not saying you have to have rainbow lighting, for example," she said. "But as you are thinking about whatever art piece you are going to apply or present that it has to be with the theme and thought in mind that this terminal is the Harvey Milk terminal and is meant to pay tribute to this incredible historic leader in San Francisco."