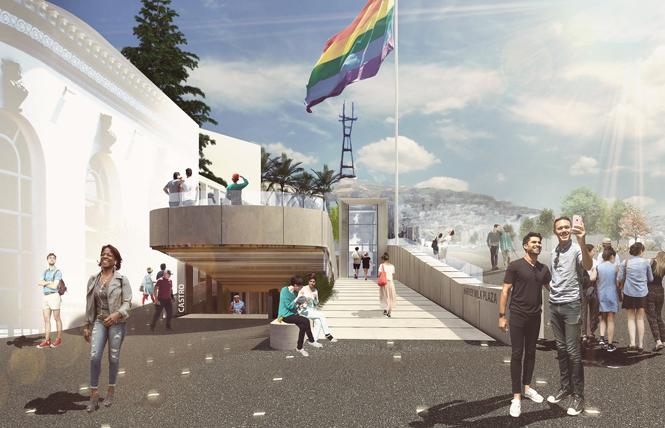 Critics contend that the proposed design for Harvey Milk Plaza would obscure an old Beaux-Arts bank building, left, and that the bleacher seating faces away from the gayborhood. Photo: Courtesy Perkins Eastman

The proposed remodel of Harvey Milk Plaza ran into headwinds of dissent this week as arts commissioners critiqued the project and a prominent local architecture critic pooh-poohed the design.

Survivors of the AIDS epidemic also voiced complaints about the desecration of what they consider to be hallowed ground, while city officials revealed a review of the plaza's historic relevance is being undertaken.

The group Friends of Harvey Milk Plaza is proposing a wholesale reimagining of the entrance into the Castro Muni Station to better honor its namesake. In 1985 city leaders dedicated the plaza as a memorial to Milk, the first gay person elected to the Board of Supervisors who was assassinated on the morning of November 27, 1978.

Considered the front door into the city's gay Castro district, the plaza has a small photo display and bronze plaque about Milk just outside the entryway into the Muni station's fare gate level. But complaints about the sunken area have dogged it for decades, in particular it being a magnet for homeless individuals.

Earlier this year the global design firm Perkins Eastman, which has an office in San Francisco, won a competition to reimagine the plaza. It has proposed covering the belowground parklet with a new roof to bring it flush with Market and Castro streets. The stairs into the transit station and a new tilted canopy above them would be pushed back to allow for a larger plaza fronting Castro Street.

The structure would conceal a gate to close off the entrance into the Muni station at night and double as bleacher seating sporting historical markers about Milk's life and the fight for LGBT rights.

Behind it would be an open plaza adjacent to a new elevator into the Muni station and a triangular grove of 11 ginkgo trees representing each month that Milk served in office. Known for changing the color of their leaves to yellow in November, the trees would also commemorate Milk's death. Lights scattered among the trees would replicate the candlelight vigil that was held the night Milk was killed along with then-mayor George Moscone by disgruntled former supervisor Dan White.

As the Bay Area Reporter noted in a story last week, the exact cost for the plaza redesign is unknown. The design firm has estimated a construction price tag of $17,182,422, while others have said it could total as much as $30 million. A proposed park bond set to go before voters in the fall of 2019 is being eyed as a potential funding source, while the friends group has pledged to raise upward of $11 million.

It is expected that the final design for the plaza will evolve as the proposal wends its way through the city's lengthy review process. That expectation became stronger following the arts commission's civic design review committee's meeting Monday, October 15.

Several members of the body echoed the sentiments of San Francisco Chronicle design critic John King, who came out against the plaza design in the paper that morning. He particularly zeroed in on the seating area facing toward Twin Peaks and away from Castro Street, noting that it would not protect users of the space from the elements. The area is buffeted by strong winds that blow down from Twin Peaks.

Arts Commissioner Kimberlee Stryker, who chairs the committee, agreed with King that the amphitheater seating as proposed "throws things off" by not only impeding the views of the surrounding hillsides but also blocks the historic former bank building that fronts the plaza.

"It is a serious design issue that needs to be looked at again," she said.

Arts Commissioner Dorka Keehn also questioned the proposed siting of the amphitheater and urged the plaza proponents to "think about the wind and how people are really going to use that space."

Erich Burkhart, the managing architect for the project with Perkins Eastman, explained the idea for the bleacher-like seating came from the design of a transit station in Boston and from Milk himself.

"For us Harvey Milk was all about public discourse and taking a position in public," he said, stressing that "this is a conceptual design. It looks ready to build but not really."

Daniel Bergerac, a gay man who is president of the Castro Merchants business association, spoke in favor of the plaza project. He argued it would assist area merchants by boosting the number of tourists who visit the Castro.

"San Francisco is not a tech town, it is a tourist town," he said. "The Castro doesn't get its share of tourists."

Against proposal
A number of speakers, however, spoke out against the proposal, arguing that it would not only exacerbate the homeless problem at the plaza but also unnecessarily destroy a historic site used by thousands of men felled by the AIDS epidemic of the 1980s and early 1990s.

One detractor of the design is Harry Breaux, a gay man who moved to the city in 1971 and for six years has volunteered as a Castro ambassador with the Castro/Upper Market Community Benefit District. He questioned if anyone would use the seating since "most of the time there it's cold, windy, and people don't hang out there."

And, Breaux argued, the existing entrance into the Muni station "are sacred steps" because of the people lost to AIDS who walked over them everyday as they headed to and from work.

"It should be treated as a sacred honor and space and not just be ripped out," said Breaux. "I feel it is totally unnecessary."

Joseph Chase also spoke out against tearing up the existing plaza and "obliterating" a historic site used for countless protests and community events over the years. He said Milk "would be ashamed and shocked at spending so much money on something that doesn't need to be done in my opinion."

Art historian Paul V. Turner, a former Stanford professor who was friends with Milk and his lover Scott Smith, also argued the plaza redesign is "unnecessary" when the existing site could easily be improved to address the complaints with it. He also warned the seating structure would impair views of the 1922 Beaux-Arts building at 400 Castro Street designed by Edward Foulkes.

"The present plaza respects it completely and you are able to see it in all directions," said Turner of the commercial space now home to a SoulCycle. "In contrast, the proposed new bleacher seating would compete with the building and obscure it."

Howard Grant, the gay man who designed the existing plaza and transit station and has been a vocal opponent of the redesign, also implored the arts commissioners not to allow the proposal to move forward. While this week's hearing was only informational, the committee will be asked at some point to vote on the plaza project.

"It is a community asset that should be treasured, not demolished," said Grant, noting that it could be a key component in establishing an LGBT cultural heritage district in the Castro. "Harvey Milk Plaza is at the top of the list of specific sites to be preserved. What is the compelling reason to demolish the plaza?"

Another vocal critic of the project has been John Goldsmith, who has been circulating a petition in support of rehabbing the existing plaza space and turning its planters into two gardens, one in honor of Milk and the other the nation's first LGBTQ Veterans Grove, where the plaza connects with Collingwood Street. Gay veteran John Caldera had proposed such a grove at the site years ago but the plan never gained traction with city officials responsible for the plaza.

"Please help us save Harvey Milk Plaza," he implored the arts commissioners.

The idea for redesigning the plaza emerged from the San Francisco Municipal Transportation Agency setting aside $9 million to add a new elevator there to improve access into the transit station. The agency expects to install it in 2021 and is working with the friends group to mesh its design with that for the new plaza.

San Francisco Public Works is the lead agency for the plaza redesign project, which it considers to be Phase II of the overall work at the station. At this week's hearing before the arts commission panel, Public Works architect and project manager Douglas Ullman said the city will undertake a California Environmental Quality Act, or CEQA for short, review of the project that would include an assessment of the plaza's historic importance.

He also stressed to the public that they would have many more opportunities to weigh in on the redesign for the plaza as it moves through the various city agencies that need to sign off on the proposal before it can be built.

"No thumbs are being put on the scales here. We are doing this in a transparent and public way," said Ullman. "We do want to get consensus on the design so the fundraising can start in earnest."

CBD Executive Director Andrea Aiello, who is president of the friends of the plaza group, acknowledged that the plans presented to the committee this week would likely change.

"What it will end up looking like we are not sure yet," she said.