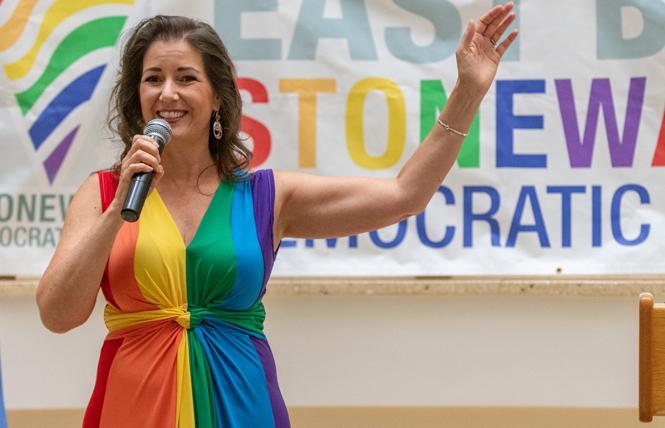 Oakland Mayor Libby Schaaf made a courageous decision earlier this year that her nine challengers can't touch: in late February, she tweeted that "credible sources" told her that an immigration sweep by federal authorities was imminent and said it was her "duty and moral obligation" to warn families. The raids by Immigration and Customs Enforcement did happen, resulting in more than 150 people arrested in California; it's likely many more were spared because of Schaaf's action. President Donald Trump and Attorney General Jeff Sessions called her out, and Sessions said back in March that the Justice Department was looking into obstruction of justice prosecution against her. Schaaf has stood her ground and told us during a recent editorial board meeting that she would do it again.

That took a lot of guts in the age of Trump. And that's just one of the reasons we endorse her for re-election.

Issues like homelessness and affordable housing are center stage in Oakland, which doesn't have the resources of San Francisco for services like Navigation Centers. But Schaaf, to her credit, started a different kind of program, the Tuff Shed cabin communities. These are retrofitted sheds that are grouped together near where tent encampments used to be located. Staff are on-site, and people can bring their belongings and their pets. Contrary to some reports, Schaaf said that the majority of the city's homeless population comes from Alameda County, and the city is working to get people housed. "We've not arrested people and we're not criminalizing the homeless," she said. "With the cabin communities, we are creating an invitation zone to bring the community to the Tuff Sheds and get them comfortable. Compared to traditional shelters, most residents are very happy."

Public safety is another challenging issue in Oakland. Two years ago, the city cycled through three police chiefs in nine days, which started when Chief Sean Whent was forced out over the police department's sexual misconduct scandal. For a time, the department was under civilian control until Schaaf hired Chief Anne Kirkpatrick in early 2017. So far, the mayor is "very pleased" with Kirkpatrick and said the number of academies has increased, though she said it will "take years" to recover from the effects of the sex scandal, which, she said "interrupted our training and recruitment process."

"I support the chief in only [having] the best of the best," Schaaf told us. "She has fired 14 sworn officers for misconduct and sent home 50 academy trainees."

On LGBT issues, the mayor is a strong ally. She is happy that the Oakland LGBTQ Community Center opened last year and said she has privately helped raise money for it. Her ability to include city money for the center in the budget is somewhat limited due to the two-year budget cycle and her reluctance to line-item programs into it. But, she has nine months until the next budget cycle and said she would consider it. We urge her to do so. The leadership of the center has remained stable and its programs and offerings are robust, serving a large number of queer Oaklanders. It deserves some city funding.
The mayor also touted an improved score of 97 (out of 100) on the Human Rights Campaign's just-released Municipal Equality Index. (The city's score had been in the low 80s.) She attributed the improvement to better reporting; for example the city has an LGBTQ liaison in the police department, but the position wasn't previously listed.

The horrific Ghost Ship fire in December 2016, in which three trans people were among the 36 killed, rocked the city and exposed shortcomings in the fire department's safety inspections. Schaaf said the city is ramping up its fire prevention bureau and adjusted its fee schedule to support increased staffing. It just awarded a contract to a company to rewrite fire codes and is in the final stages of recruiting a new fire marshal. "Oakland has a lot of old building stock," the mayor said. "We're looking to legalize these types of spaces."

The building boom now underway in the city favors mainly market-rate housing units, although Schaaf said that impact fees are required for inclusionary housing and developers can pay into a housing fund or include the affordable units on site. She's aware that not everyone is satisfied. "People will always be unhappy and that's good," she said. "I don't take issue with that. Oakland is a city of protest." She added that she'll call out "Nimby wolves." "If you put in policies that stop all development that's not helping the housing crisis," she explained. "We've got to figure out a way in this system and get as much affordable housing as the market will tolerate without stopping construction."

What Schaaf would really like to see — and what she's working toward — is a regional approach to homelessness and housing, like constructing affordable projects near transit. And she supports tenants having the right to counsel if facing eviction.

"Protest, preserve, and produce," Schaaf said. "I'm the only person in this race positioned to get something like this done."

Oakland has improved in myriad ways during Schaaf's first term. Voters should re-elect her so that she can build on that progress.