Ugandan lesbian activist speaks about troubled times and her faith 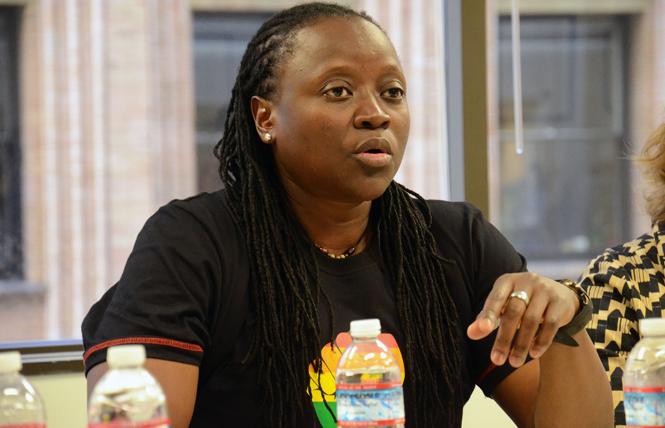 Ugandan LGBT activists have been on edge this year.

Lawmakers have discussed bringing back the stringent version of an anti-homosexuality bill, LGBT organizations have been denied legal registration, and events and spaces where LGBTs gather have been closed down.

Attacks on the community have increased since Trump took office, but 2018 has been unique, she said.

"We don't know what is happening because there is a lot of hate speech on radio, TV, and on social media," said Warry, noting how attacks against LGBT Ugandans have been heating up just as parliamentary discussions began about bringing back the so-called "jail the gays" bill.

The Bay Area Reporter spoke with Warry while she was visiting San Francisco in July.

Warry was one of the speakers at the July 23 panel discussion "Cake, Faith, and Resistance — Reflections on Masterpiece Cakeshop and Faith-based Resistance Abroad" in the city that was sponsored in part by Bay Area Lawyers for Individual Freedom.

Challenging times
She explained that the situation is tenuous in Uganda. For the past several years Ugandan LGBT activists have been losing cases, such as the HIV/AIDS Prevention and Control Bill in 2014.

Warry, along with Frank Mugisha of Sexual Minorities Uganda, lost cases challenging the Ugandan registration bureau to register their organizations' names, she said.

Additionally, celebrations, events, workshops, and other LGBT events have been shut down by Simon Lokodo, minister for ethics and integrity. Most recently, he warned organizers of the proposed LGBT community center that they would break Uganda's existing anti-homosexuality law if the center opened. LGBT Ugandans said they need the space.

A gathering spot was needed for the "vulnerable community" that is regularly confronted with violence and discrimination, Alicia Houston, 22, a campaigner and HIV-positive transgender woman in Kampala, told Africa.com.

"It will also be a creative space that will cater to many who don't have other chances to express themselves elsewhere," she said.

Warry sees Lokodo and other Ugandan officials' actions against the LGBT community as part of a new trend crowned by the uncertainty of when the jail the gays bill will return to parliament.

"All the members of parliament, every time [they] post the bill [they ask], 'Can you bring the bill already so that we do pass it?'" Warry said. "So, if it happens to come back it will pass."

She, along with other LGBT community leaders, are concerned that when the bill is introduced it won't be as bad as the original bill, but it will be stricter than the 2014 anti-homosexuality law.

That law was watered down after sustained international backlash. Ugandan lawmakers finally backed down and changed a provision for the death penalty to life imprisonment.

The bill was first introduced in the Ugandan parliament in 2009 and thrown out on a technicality by the country's constitutional court the same year it was signed into law.

"I'm very sure that if the anti-homosexuality bill comes back it's going to be more challenging," said Warry.

"They might not include the death penalty, but the life imprisonment would not be removed," said Warry. "And way worse decisions, worse articles [are] expected to be in the new anti-homosexuality bill if it ever resurfaces."

The community is currently watching and preparing for their next actions, she said.

Hope
Warry sees hope through the fear and uncertainty for LGBT people in America and Uganda.

She praised Deborah R. Malac, American ambassador to Uganda, who was appointed by former President Barack Obama, for her continued support of the LGBT community.

Warry expressed concern about potentially losing Malac as an ally and hopes that she will continue in her role through the Trump administration.

"She values and she protects the rights of LGBTI persons as an individual, even if the administration does not support LGBTI persons," said Warry. "So, if such a person leaves then we don't know the kind of ambassador will be brought to Uganda."

Warry said she is uncertain about what LGBT and ally Americans can do to help Uganda's LGBT community.

"Whatever happens in America has a very, very big impact on Africa, most especially Uganda," she told the panel audience.

Echoing what other Ugandan queer activists have said in the past, she said that LGBT and ally Americans need to check their faith leaders, particularly evangelicals.

"American evangelicals have made Uganda misinterpret love," she said. "They fueled, promoted, and preached hate toward gay people.

"The Bible clearly speaks about love and hate, so while they are pointing at us as sinners they are sinning by preaching hate," she noted. "They should always be mindful of the kind of hate that they are preaching. They could be preaching against their own."

Americans should talk about the effect evangelicals have had on Uganda and other African countries, she said.

"I believe that homophobia is not Africa, homosexuality is Africa," said Warry. "Homophobia was introduced by the missionaries. They enacted the draconian laws."

Spiritual healing
Spiritually, the community is embracing its queerness and faith, said Warry, who is Catholic.

LGBT Ugandans of faith, like Warry, are creating their own spaces and starting to speak to their community and faith leaders.

"We have to create our own space," said Warry, who started an LGBT Catholic club, because LGBT people of faith need what she called "emotional nourishment" for their souls due to the amount of "negativity we have to create the love."

She told the audience that what she tells fellow LGBT Ugandans is, "God is love. We are loved. We remind our communities, don't listen to the anti-gay people because each one of us is born in God's image, so let nobody judge you."