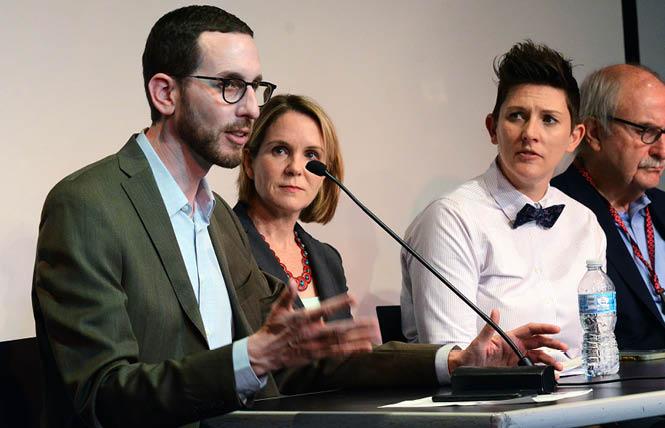 The SCAN Foundation and West Health, a San Diego-based nonprofit health care provider and advocacy group for seniors, are leading the drive to see state officials create a Master Plan For Aging. Earlier this year they launched the We Stand With Seniors ... Will You? campaign to lobby lawmakers and policymakers in the Golden State on the various issues confronting older adults, their caregivers, and families.

About 50 people attended an informational session about the campaign last Thursday morning at the LGBT Community Center in San Francisco. The event was co-sponsored by Openhouse, the LGBT services agency based in the city that helps oversee an affordable housing development aimed at LGBT seniors a block away from the LGBT center.

"We can't just talk about supporting seniors," said gay state Senator Scott Wiener (D-San Francisco), "we have to do it."

Both gubernatorial candidates Democrat Gavin Newsom, the state's lieutenant governor and a former mayor of San Francisco, and Republican businessman John Cox have pledged their support. Whoever is elected in November will be pressed to follow through on their commitment to create a statewide aging master plan.

"You are going to have a champion if I can win this governor's race," said Newsom in a taped message. He agreed that there is a growing "aging and graying population in the state of California that needs to be celebrated, that needs to be invested in, that needs a plan to address the long-term aging needs of this state."

Added Cox in his own videotaped statement, "Help is on the way. The seniors of this state are the backbone of our society. They deserve nothing less than our best efforts and attention."

"We have a growing LGBT senior population," noted Wiener. "We have not done what we need to to plan for it."

While the UCLA researchers found that the LGB older adults were as healthy as their straight counterparts, a departure from previous studies, they did discern that bisexuals and Hispanics/Latinos exhibit poorer health and well-being than their lesbian and gay and non-Hispanic peers.

"We really need to hear from the seniors. They need to have a seat at the table," said Cecilia Chung, a transgender woman who is a health commissioner in San Francisco, at last week's forum.

CJ Peoples, who attended the event with his dog, Mister, is a single, 64-year-old gay man who lives alone in the city's TenderNob area between the Tenderloin and Nob Hill neighborhoods.

"The one thing that scares me is being alone when I die," said Peoples, who is retired. "What is this grand plan going to do for me?"

Roma Guy, a lesbian who formerly served on the city's health commission and now advocates for prison reform, pointed out that many aging services are only eligible to people 62 or older when the age limit needs to be lowered to 50 or 55 years of age. Many people of color and LGBT people who have experienced discrimination or trauma in their lives confront aging issues earlier than others, noted Guy.

"If we do another strategic plan and the age eligibility for services is 65, those people will not come because they know they are not a part of it," she said.

The U.S. Administration on Aging requires that the California Department of Aging every four years create a new State Plan on Aging. The latest report, which covers 2017 through 2021, mentions LGBT seniors 11 times within its 104 pages.

"Lifelong fears or experiences of discrimination have caused some of these older adults to remain invisible, preferring to go without much-needed social, health, and mental health services," states the report.

Noting how difficult it is to accurately count LGBTQI older adults, the report nonetheless estimated there are approximately 380,282 to 760,565 older LGBTQI Californians. And it predicted that, by 2030, that number would nearly double.

A more comprehensive plan, however, is needed that addresses the varied issues seniors in California are struggling with, said Sarah S. Steenhausen, the SCAN Foundation's senior policy adviser.

"We are hopeful a master plan can start to address these needs but only if it is done comprehensively," she said at last week's forum. "Many reports have been written in the past but there has been no action to follow it up. They just sit on shelves."

Clair Farley, a transgender woman who is the director of San Francisco's Office of Transgender Initiatives, echoed other panelists at the forum in suggesting the aging master plan be modeled after the report the city's LGBT Aging Policy Task Force issued four years ago. It was completed within two years and set out a list of policies that city leaders could implement in order to address the needs of San Francisco's aging LGBT residents.

All but two of the recommendations in the report have since been enacted, with city leaders working to address the remaining suggestions ahead of the five-year anniversary of the report next spring.

State leaders have taken a number of steps already to address the needs of LGBT seniors as well as straight older adults. In 2014 the state Assembly Committee on Aging and Long-Term Care created a one-inch thick report detailing the needs of the state's minority senior populations, including LGBT older adults.

As the Bay Area Reporter noted in a story — https://www.ebar.com/news//245036 — about the report, called "Faces of Aging," it did not call for any specific legislation. Instead, it was meant to serve as a resource for lawmakers interested in pursuing bills aimed at addressing senior needs.

Since its release, state lawmakers enacted legislation that went into effect this summer requiring a number of state agencies to collect sexual orientation and gender identity, or SOGI for short, demographic data on the LGBT people they serve. It mirrored local legislation passed by San Francisco leaders that also requires city agencies, as well as providers of aging services funded by the city, to ask SOGI questions of the people they serve.

The state also enacted a law that required continuing medical education curriculum to include a discussion of LGBT-specific issues. More recently, Wiener pushed through a "senior's bill of rights" for those LGBT people and others living in assisted living facilities to ensure they were not discriminated against due to their being LGBT. Again, it was modeled after a law he helped pass while on the San Francisco Board of Supervisors.

But much more needs to be done, contend senior advocates, particularly to assist those seniors who want to age in place at home. The issues they want to see included in a statewide aging master plan run the gamut from affordable housing and assisting homeless seniors to ensuring access to affordable health care and better pay for home health care workers.

One step Wiener said voters could take to assist seniors and others who are struggling to remain housed is to support Proposition 1, the $4 billion bond for affordable housing on the November ballot.

What is driving the campaign for the comprehensive aging plan is "we really want our seniors to successfully age in place," said Bill Earley, the chief operating officer and general counsel of West Health who is a member of the California Commission on Aging. "How can we build the coalitions we need to go to Sacramento so the new administration hears us and hears us clearly?"

Because, noted Earley, "senior issues have not been at the forefront of our political debate, with a few exceptions."

To learn more about the campaign for the master aging plan, visit its website at https://www.westandwithseniors.org/.

Keep abreast of the latest LGBT political news by following the Political Notebook on Twitter @ http://twitter.com/politicalnotes.
Got a tip on LGBT politics? Call Matthew S. Bajko at (415) 829-8836 or e-mail m.bajko@ebar.com.