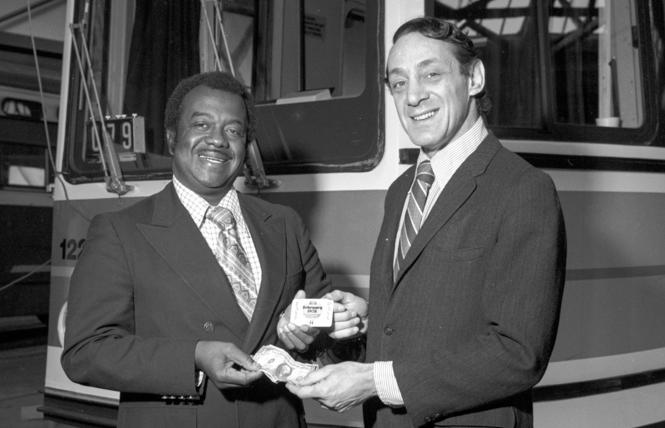 Staged photos of the two pioneering city officials — Milk being the first gay elected leader of a major U.S. city, and Green the first African-American in the U.S. to lead a major city's transportation agency — show Milk handing Green a dollar in exchange for the Muni pass while the two stand in front of one of the San Francisco Municipal Transportation Agency's Boeing light rail vehicles.

Another photo, posted earlier this year to the SFMTA Photo Archive as part of a project to digitize and make searchable archival images from the year 1978, has a smiling Milk shaking hands with Green, who is on the steps of the vehicle, as if he is about to board.

Milk, who was assassinated in November 1978 along with then-mayor George Moscone, is the only city leader to have a streetcar in the F-Line fleet dedicated to him. The Harvey Milk Streetcar, No. 1051, is painted in the same green and cream color scheme it had in the 1970s. First dedicated in 2008, it returned to service in March 2017 after receiving a restoration.

An earlier honor for Milk came in September 1985 when city leaders dedicated the plaza above the then 5-year-old Castro Muni Station after him. It is the de-facto entrance into San Francisco's gayborhood, which Milk called home and was where he opened his Castro Camera store.

Thus, it is no surprise that a planned reimaging of the plaza to more fully incorporate Milk's life story and achievements into its design enjoys broad political support.

All of the candidates running for supervisor this year who turned in the Bay Area Reporter's questionnaire said they would support allocating city funds toward the project.

The group Friends of Harvey Milk Plaza is proposing a wholesale remodel of the area that would see the current sunken entrance into the Muni station be covered with a canopy roof. It would hide a gate that could be rolled down at night and would protect the escalator from the elements.

The canopy would have a meandering path up to a lookout area and include historical elements detailing Milk's life and the progression of the LGBT community. Behind it would be an open plaza adjacent to a new elevator into the Muni station and a grove of 11 ginkgo trees representing each month that Milk served in office.

The final design, however, is likely to evolve as the proposal wends its way through a lengthy city approval process. It kicks off Monday, October 15, when the arts commission's civic design review committee weighs in on it for the first time.

Thus, the exact cost for the project is yet to be determined, with gay District 8 Supervisor Rafael Mandelman recently telling the B.A.R. that the price tag could be $20 to $30 million. The plaza group has pledged to raise at least $10 million in private donations for the project.

"It is a moving target," Mandelman said during an editorial board meeting. "It is not far enough along to know the cost yet."

Mandelman, who represents the Castro district, supports renovating the plaza, which he said is "historic-ish but has a lot of problems. It doesn't work in a lot of ways."

He recently met in his office with representatives of the plaza group and San Francisco Public Works Director Mohammed Nuru to discuss the project. Mandelman said he expects to have a better sense of the costs sometime next year as well as sources of funding.

"The project is not going to happen until the city is committed to it," he said.

One suggestion proposed by both District 2 Supervisor Catherine Stefani and one of her opponents, Nick Josefowitz, a member of the board that oversees the regional BART transit system that owns the Castro Muni station, is to include the Milk plaza project in the parks bond set to go before voters in November 2019.

"I would argue why wouldn't it be appropriate. Parks are not just grass but where we as a community get together," Josefowitz told the B.A.R. editorial board. "Harvey Milk Plaza is an incredible part of our city's heritage."

Stefani noted that similar projects have been included in previous parks bonds.

"The city doesn't have to fund all of it," she told the B.A.R. "What I love about local government is there are so many ways to finance what we want to see and is important for us."

Including the plaza project in the parks bond is "certainly" possible, Mandelman told the B.A.R., as did designer Brian Springfield, secretary of the plaza group. He added that "it is possible there is money already" from previous parks bonds that could be allocated to the plaza remodel.

Public Works recently assigned a project manager to usher the plaza project through the design, approval, and construction phases.

"We will work closely with the community sponsors. We view this as a public-private partnership," Rachel Gordon, the agency's spokeswoman, told the B.A.R. this week.

With the project still in the conceptual phase, Gordon said it is too soon to know what it will cost.

"We do not yet have a final budget, given that the design has not been cemented, nor has the final work scope," she wrote in an emailed reply. "We will be working closely with the community sponsors on budgeting as we move forward."

As for the SFMTA's elevator project, which inspired community groups to propose redesigning the plaza, it should be installed in the spring of 2021. The $9 million project is being considered the first phase of the plaza redesign project and has been initially approved by several city agencies.

"We are working in collaboration with the Friends of Harvey Milk Plaza (FHMP) team to see if there are opportunities to incorporate some parts of the new plaza vision in the SFMTA design," explained SFMTA spokeswoman Erica Kato in an emailed reply. "We are treating the two projects as a Phase 1 and Phase 2 of the same overall concept, with the new elevator going in first in Spring 2021 and the new plaza going in next when FHMP completes their design, and gets approval and funding to proceed."

The plaza project has its detractors, who argue the current layout of the area could easily be enhanced at less cost to better honor Milk and address the accessibility issues with the Muni entrance. A chief critic of the redesign proposal is the plaza's original architect, Howard Grant.

"To properly honor Harvey, it is not necessary to demolish the plaza (with the attendant expense and hardship that would result for Muni patrons, neighbors, and businesses for over a year)!" wrote Grant in an email sent last week to city officials.

Web Extra: For more queer political news, be sure to check http://www.ebar.com Monday mornings for Political Notes, the notebook's online companion. The column returns Monday, October 15.
Keep abreast of the latest LGBT political news by following the Political Notebook on Twitter @ http://twitter.com/politicalnotes .
Got a tip on LGBT politics? Call Matthew S. Bajko at (415) 829-8836 or e-mail m.bajko@ebar.com.