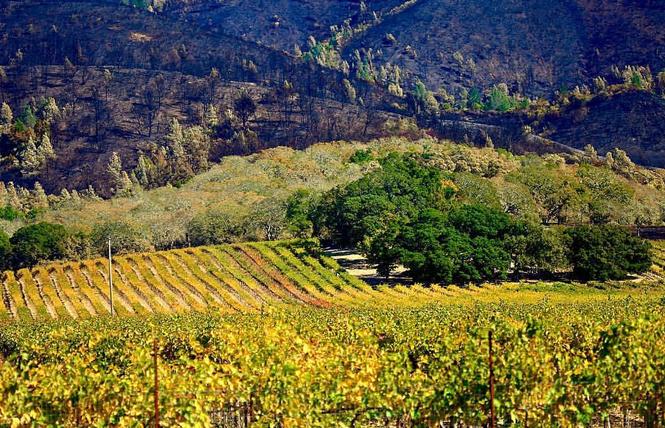 Charred hills are visible above vineyards following the wildfires that roared through Sonoma County in October 2017. Photo: Mark Vogler

Sonoma County is recovering from the wildfires that devastated the region last October as they ripped through the northern part of Santa Rosa, Kenwood, Glen Ellen, and Sonoma.

A year later, the charred hills can be seen in the distance hovering over the manicured vineyards from Highway 12 between Santa Rosa and Sonoma. Glimpses of the blackened remains punctuated by homes untouched by the flames in the Coffey Park neighborhood can be seen from Highway 101. The hills hide the devastation in the Fountaingrove neighborhood.

Many people who spoke to the Bay Area Reporter over this past year during several different trips to Sonoma recounted how they were feeling months after the fires and where they are one year later.

The B.A.R. reached out to some people in Napa for this article but didn't receive a response.

Some LGBT people affected by the fires have moved away.

Deciding to stay
Those who decided to stay are in the process of rebuilding, while those on the periphery of the fire zone, or who weren't scathed by the blazes, have moved forward, focusing on other issues.

However, the fires are still fresh on people's minds. Everyone knows someone who was affected, either by losing their home or workplace or both. No one was really left untouched by the disaster.

"A lot of people are having a really hard time," said Greg Sarris, of Graton Resort and Casino.

The 66-year-old gay tribal chairman of the Federated Indians of Graton Rancheria, which owns the luxury resort and casino in Rohnert Park, said he will never forget the scene in the early morning hours of October 9, 2017, when people camped out in the resort's parking lot and inside the casino as the fires roared in the next city over.

The resort donated $1 million toward the fire relief and gave $5,000 to each of its 1,400 tribal members who had to evacuate. It continued to house more than 200 of its employees for weeks following the fire, Sarris said.

Graton also continues to do other things to aid Sonoma County's recovery and has brought in social service workers, legal experts, and others to help its estimated 2,000 employees affected by the fires, Sarris said.

Summer brought a rebound of tourism and was, for some businesses, the best they've seen so far, many owners told the B.A.R.

Not all businesses are bouncing back. Matile Rothschild, an 85-year-old lesbian resident at Fountaingrove Lodge, noted that the local branch of Wells Fargo Bank was closing.

Andrea Beasley, communications consultant for Wells Fargo's Bay Area region, said that the move was part of the bank's closure of 300 branches throughout the U.S. announced earlier this year due to "consumer behavior" and internal "technology advances."

"In the case of the Fountaingrove branch, we've seen a decrease in customer traffic over the last few years," she wrote in an email statement to the B.A.R.

The bank was assisting employees of closed branches find new opportunities within the bank, she added.

For the most part, businesses, particularly in the hospitality and tourism sector, are rebounding.

"There is a strong sense of resiliency," said Ryan Miller, a 28-year-old gay man who is co-founder and chief marketing officer of AutoCamp. "Since the tragedy of October last year, we've had our best year ever at AutoCamp Russian River and the community also seems to be experiencing a lot of visitors."

AutoCamp, an airstream trailer camping resort with a location in Guerneville, raised more than $15,000 for fire relief efforts. Internally, the 36-member staff raised nearly $8,000 to help co-workers affected by the fires, said Miller.

The camping resort also housed emergency and relief workers, fire victims, as well as several of its employees, he said.

Some of those employees are no longer with the company, but those who stayed are continuing to rebuild their lives, Miller added.

The co-founders of AutoCamp are now using their fundraising model from the fires in Sonoma County to benefit other camp locations located in high fire zones.

Currently, they have a campaign to raise fire prevention and relief funding at its new location in Yosemite that will open February 1, 2019, said Miller.

"When we had a devastating experience in Mariposa County, we felt that we could kind of replicate the relief campaign that we've done in Sonoma," said Miller, referring to this year's Ferguson Fire. "So far, it's been a great rallying cry for our guests and people booking our reservations."

Despite Sonoma County rebounding, the fires remain in the back of Sarris' and other people's minds.

"We live in fear of another one," said Sarris, who personally lives in a high fire area. 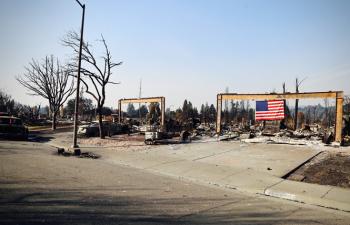 Housing crunch
John Triglia is a 92-year-old bisexual man who was a resident at Journey's End, the mobile home park in Santa Rosa that was destroyed by the Tubbs fire.

For a time, he lived at the Sandman Hotel, and in April, he moved into his new mobile home at another location. A friend purchased the mobile home, where Triglia lives with his dog, Sophie, and his 75 rose bushes, he said.

Triglia's other mobile home is still stuck at the site of Journey's End. He continues to pay the mortgage and rent on the site.

"It's just there," said Triglia. "I would think that if they want to build on that property they are going to have to do something to get us out of there. They can't very well bulldoze without paying us or pay for moving us."

In February, Ramsey Shuayto, owner of the mobile home park site, announced plans to build new low-income senior apartments on the site. Journey's End residents would be given first right of refusal to move into the new apartments. Shuayto was working with Burbank Housing, which is also working with the city of Santa Rosa's Housing and Community Services, on the project, according to media reports.

Triglia and others haven't received any updates about what Shuayto planned to do with the 43 mobile homes that survived the fire.

Laurie-Lynn Hogan, communications and fundraising director at Burbank Housing, told the B.A.R. that they've been in a holding pattern with federal and state regulators for about six months.

Managers of the affordable housing organization have been waiting for a response regarding Burbank Housing's relocation proposal. Until then, Journey's End's recovery can't move forward, she said.

Compounding the situation is that the fire created an unprecedented legal situation at Journey's End. There are laws about how to close a mobile home park but those laws don't regulate how to move forward when a mobile home park is destroyed by a major disaster like the Tubbs fire.

"We are not closing it," Hogan said. "The fire closed it."

Concerned about the limbo so many of the residents have been in for a year, Hogan told the B.A.R. the team at Burbank Housing is working to find alternative solutions and that communications with former residents should improve.

Despite the uncertainty, Triglia is moving forward.

"I'm doing very well, all because I have good friends," said Triglia. "I'm not complaining because I'm so much better off than so many people."

Grateful, but uncertain
Rothschild, the Fountaingrove Lodge resident, said that she and her partner of 18 years, Joan "Joni" Zimmerman, 82, were able to move back into their apartment right before Thanksgiving.

"Things feel back to normal in terms of our everyday lives," said Rothschild, "but for the first couple of months I was really traumatized.

"I was just so shocked by everything and every time I went outside I just cried and cried to see everything gone," she continued. "In fact, I still cry when I ride up over the hill because it's just so devastating."

Since returning the lodge residents working with management and staff have strengthened their emergency alert and evacuation plan. William "Bill" Baird, a 71-year-old gay man, and Linda "Taura" Anderson, a 67-year-old lesbian, are residents at the lodge and head up the community's emergency response.

They're now confident everyone in the community is as prepared as possible for the next emergency.

"I have a suitcase packed," said Rothschild, who is ready to evacuate with her partner at a moment's notice. "I can tell you that I don't feel safe enough that I would wait until someone tells me there's another fire to get out."

Natural disasters aren't the only thing concerning lodge residents. Legal troubles for Oakmont Senior Living, the owner of Fountaingrove Lodge, with California's Department of Social Services has Rothschild and others on edge.

She and Anderson expressed concerns following a report released by DSS September 4 faulting Oakmont Senior Living for its lack of evacuation policies and staff emergency training at its Varenna and Villa Capri buildings, which are near the lodge apartments. On September 24, Oakmont representatives dropped plans for a fifth senior care center in Santa Rosa, reported the Santa Rosa Press-Democrat.

The DSS report didn't mention Fountaingrove Lodge, but because it's also owned by Oakmont it makes some residents uncertain about the lodge's future.

"I don't think that they would just empty this building and never let anyone live in here," said Rothschild. "It's beautiful here."

Anderson added, "I want this to work. This is an LGBT retirement community that, to me, is important and is unique and a privilege to be associated with. I don't need to tear it down. I need to do what I need to do to make it work," she said.

Oakmont officials did not respond to a request for comment.

Housing had been a serious issue in Sonoma County prior to the fires, which made the situation worse, especially among the most vulnerable populations.

"Housing has become a huge, huge issue in Sonoma County," said Rick Dean, 64, a gay man who is the executive director of Face to Face, the county's HIV/AIDS organization.

Dean said that a majority of his staff and clients weren't directly affected by the fires, but they've been affected in the aftermath, particularly with housing.

The organization's clients who have rental subsidies "cannot find available housing even if there is a way to pay for it," he said.

"I think that would really be the biggest impact," he continued. "It may not be directly from the fire that they had the issue, but just because of the fire it just made their lives so much more difficult to live here."

Rebuilding
The first houses were recently rebuilt and occupied in the Coffey Park and Fountaingrove neighborhoods.

In Coffey Park, the first home was completed by the end of May and the owner moved in Memorial Day weekend.

As of August, 400 homes were in various stages of being rebuilt in Coffey Park out of the more than 1,200 lost in the fire, reported the North Bay Business Journal.

The Press-Democrat recently reported that debris removal and other complications have slowed rebuilding in Fountaingrove, where 200 permits have been issued.

On September 15, the first resident of a rebuilt home in Fountaingrove celebrated with a ribbon cutting ceremony and began to move in.