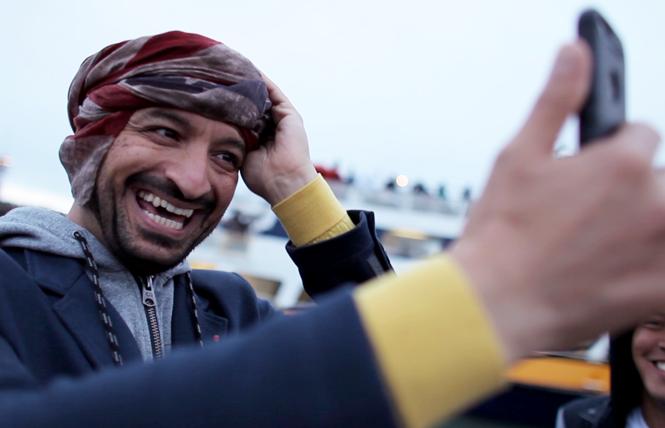 Gay Iraqi Ghazwan Alsharif's story about his journey to freedom has been a decade in the making. Next week, Bay Area audiences will have the opportunity to see the award-winning documentary "From Baghdad to The Bay."

The documentary, by award-winning independent filmmaker Erin Palmquist, who is the director, cinematographer, and producer, will be screened at film festivals in Mill Valley, Oakland, San Francisco, and Palo Alto on select dates October 13-21.

He's been pleased with audiences' responses at previous screenings earlier this year and the three awards it's garnered so far.

Palmquist, 41, is a straight ally and Oakland resident.

"It is a surreal experience to have arrived at this milestone," she wrote to the Bay Area Reporter in an email interview. "Since we premiered, we have seen viewers impacted in profound ways."

The documentary follows Alsharif through his struggles, going against his family and countrymen to help the U.S. military as a translator during the Iraq War. His decision puts his family in great danger. Eventually, it left him ostracized from them and his country, leading him on a journey to establish a new life as a refugee in the U.S.

Perhaps one of the most dramatic moments in the film is when Alsharif was imprisoned for 75 days after being accused of espionage by the same military he was helping. The reality was the only secret he held was that he is gay.

Alsharif was saved by Colonel Bobby Nicholson of the 4th Infantry Division of the U.S. Army, for whom he served as a translator. In the film, Nicholson shares his story about vouching for Alsharif and getting him out of solitary confinement in Iraq.

Alsharif came to San Francisco as a refugee in 2008.

He met Palmquist for a one-hour interview that turned into a decade-long journey for both of them that culminated into the 68-minute film.

The documentary was supported by individual donations and grants along with some personal funding, and many volunteers, wrote Palmquist, who hasn't completed the final accounting.

"Ghazwan's tenacity and his belief in himself were the characteristics that inspired me to see it through to the finish line," wrote Palmquist. "In telling a story as complicated and traumatic as Ghazwan's, it is not surprising that the process has also been layered with challenges and sacrifice."

The documentary focuses mostly on Alsharif's experience working with the U.S. military, his time being detained, and his struggles starting life anew in San Francisco. It wasn't the goal of Alsharif or Palmquist to include his sexual orientation in the telling of the story due to the risk, but circumstances changed their perspective.

A year after Alsharif came to the "gay mecca," headlines began to emerge about the torture and murders of mostly gay Iraqis in 2009. The news prompted him to do something highly unusual for LGBT Middle Eastern people at the time — he spoke out and became visible.

In 2015, Alsharif and other Iraqis spoke to the Bay Area Reporter about life before the fall of Saddam Hussein's regime with the U.S. invasion of Iraq in 2003. The "Don't Ask, Don't Tell," way of life for LGBT Iraqis was far different from the harsh realities of life for them only a few years later with the rise of anti-American and anti-gay sentiment and the Islamic State of Iraq and Levant. Their stories echoed LGBT and human rights reports about what was happening to gays in Iraq and unredacted U.S. State Department reports from 2009 released by WikiLeaks.

"This allowed for he and us to grow into a place where we could not omit such an important part of who Ghazwan is, as well as truly witness the journey that he has traveled to be where he is today," she wrote.

Alsharif praised Palmquist's ability to capture his struggles, life, and personality in the documentary. It touches on his pain being separated from his young son, who lives with his ex-wife in England, and adopting a new homeland. He became a U.S. citizen in 2014.

He's become a chef, appearing on the Food Network's "Guy's Grocery Games," and a week ago started his new position as executive chef at the California Academy of Sciences.

In August, his son came to visit him for the first time since they were separated following his divorce from his wife. His son stayed with him for 40 days.

"I was struggling from depression, struggling to survive this city, struggling to know the culture, to get a career, to build a career," said Alsharif. "I did try to do stupid things to myself previously when I had depression here, but I was strong enough to believe in myself and move on.

"Now, I'm looking at myself and how proud I am to be big and successful," he continued.

Palmquist echoed Alsharif's hope that audiences are inspired and find the courage within themselves. But she also hopes to "challenge people's perceptions and paradigms" about "human rights, immigration rights and LGBTQI rights, to what it means to be Arab and gay, as well as the military experience" and spark conversations.

"San Francisco is Ghazwan's home and he has contributed so much to this city," wrote Palmquist. "It is absolutely wonderful to be sharing his incredibly important story with the local community."

For more information and to see the trailer, visit http://www.frombaghdadtothebay.com.

An initiative to constitutionally ban same-sex marriage failed to garner enough votes to move any further in the political process, according to a news release from OutRight Action International.

Only 20 percent of registered voters cast their ballot during the vote October 6-7, automatically voiding the referendum, which needed at least 30 percent to be valid.

The measure was passed by the country's parliament in September and was backed by a ruling by Romania's Constitutional Court. However, a week before the vote the court ruled Romanian same-sex couples should have the same family rights as straight couples on September 27.

House Dems urge reversal on new same-sex partner visa policy
Democratic leaders in the House of Representatives have urged reversal of a new policy that denies family visas to the same-sex domestic partners of diplomats posted in the United States and gives those already in the country three months to marry or lose their visas.

In an October 5 letter to Secretary of State Mike Pompeo, more than 100 Democratic House members urged him to reverse the policy, stating it "sends the wrong message that the U.S. is not welcoming of all people."

The policy change, announced in a July 20 memo, was to "ensure and promote equal treatment," according to officials.

It went into effect October 1.

The policy affects more than just diplomats serving in the U.S. and Americans serving abroad. It also affects those who work for the United Nations, the World Bank, North Atlantic Treaty Organization, and other groups, reported the New York Times.

A senior administration official speaking anonymously to the Times and Washington Post said that 105 families currently in the U.S. are affected by the changed policy, 55 of whom are connected with international organizations.

"The United States must maintain its moral leadership on all human rights issues, including those affecting LGBTQI people," the representatives stated in their letter.

The representatives noted that "only 26 countries — a mere 13 percent of U.N. member states — allow same-sex couples to marry."

They raised concern about the department's failure to recognize that a majority of countries around the world don't allow same-sex domestic partners to marry. Furthermore, they expressed concerns about the policy's effect on U.S. diplomats, as many countries offer reciprocal visas. They argued the new policy could put many U.S. diplomats at risk, opening them up to potential retaliation.

"Denying visas to same-sex partners of foreign diplomats and U.N. officials is a discriminatory reversal of a policy that recognized that not all same-sex couples around the world have the freedom to marry and unfairly targets LGBT families," gay Representative Mark Takano (D-California), told the Post.

Takano urged the administration to reconsider a "dangerous and bigoted policy."

LGBT advocates also expressed their concerns about the new policy following its enactment.

Hyung Hak "Alfonso" Nam, president of U.N. Globe, which represents LGBT staff at the United Nations, said he is concerned about partners of diplomats who come from countries where some people could be vulnerable to prosecution. He said it will create obstacles for couples considering a posting at the U.N. headquarters in New York.

Samantha Power, former U.S. ambassador to the U.N., tweeted her objection to the new policy, calling it "needlessly cruel & bigoted."

There would be a "limited exception" for diplomats who come from countries where same-sex relationships are illegal on a case-by-case basis, according to State Department representatives.

From Baghdad to The Bay Teaser from Erin Palmquist on Vimeo.