Editorial: Li stands out in BART board race 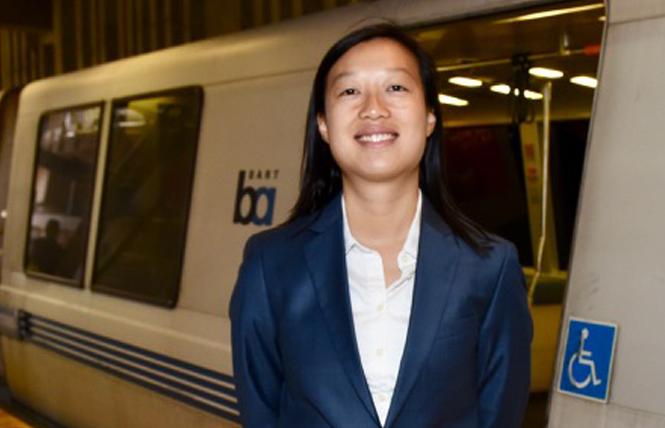 First of all, we were impressed with the three leading candidates for the BART District 8 seat. Janice Li, Jonathan Lyens, and Melanie Nutter all told us about important changes they believe will improve the regional transit system. In particular Lyens, who is blind, would bring a valuable perspective to the board. But Li, a queer woman of color, has the edge, in our opinion, with her direct involvement in transportation, and we endorse her for the seat.

Li, an immigrant from Hong Kong, is currently the advocacy director for the San Francisco Bicycle Coalition. She has a substantial background in transportation and transit policy, with a focus on funding. That's just what BART needs. There are competing interests on the board, with some directors favoring expansion while others want to make upgrading the core a priority. Safety concerns are foremost in many riders' minds, and we agree with Li that the agency should shore up the core system. That includes spending money for social workers and other staff (not necessarily sworn police officers) to deploy at stations where there are problems with street drug users and homeless people. Li also talked with us about better station design, starting with fare gate replacements at key stations, including all downtown San Francisco ones. "We need fare gates that are accessible to people with disabilities and people with bicycles that are also making passengers feel safe about who is able to enter BART stations," she wrote in her questionnaire.

Li strongly supports an effort started earlier this year by gay director Bevan Dufty (who has endorsed her) to launch a pilot program of elevator attendants at some San Francisco stations. The elevators, as anyone who's had to use them knows, are often reduced to expensive urinals that break down frequently. It's a problem for people with disabilities, parents with small children, seniors, and those with mobility issues. If an elevator at your station is out of service, there's no option but to go to the next station — a major inconvenience. Since the attendant program started, elevator users have noticed marked improvement. Li said she'd like more information in order to understand the resources that would be required to expand the program. "I'm a big proponent of identifying new revenues and prioritizing operations funding so that we can get more adequate staffing at BART stations in general, whether that's elevator attendants, social workers, or station agents," she wrote.

The BART board has changed dramatically in the last 10 years. There are younger members, including a gay man, a lesbian, and an African-American woman who is legally blind, who understand that the system needs to address issues with a more holistic approach. The 2009 shooting death of Oscar Grant by a BART police officer shocked district administrators and board members. It sparked massive protests in Oakland by an angry public. BART has a wound that in many ways is still raw, especially in today's polarized society. Significant police reforms have been made, but more work needs to be done. Li expressed some reservations about BART Police Chief Carlos Rojas. We think he deserves some more time to implement changes.

Li said that for a long time, BART's philosophy was that running the trains was enough. "I don't think that's good enough," she told us. "It's not OK, as any rider will tell you. We need a safe, reliable transit system that puts people first."

We agree. Li is the best choice for BART District 8.