by by David-Elijah Nahmod 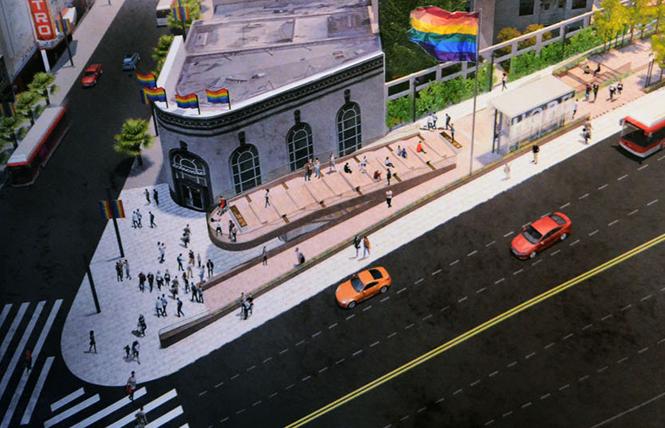 The revised design of Harvey Milk Plaza was presented during a reception in the Castro Thursday, October 4. Photo: Rick Gerharter

A revised redesign of Harvey Milk Plaza was unveiled during a reception last week, as project officials prepare for their presentation to a San Francisco Arts Commission committee.

"They have to review the project all the way through final documents," Andrea Aiello, executive director of the Castro/Upper Market Community Benefit District and president of the Friends of Harvey Milk Plaza, told the Bay Area Reporter. "They give comments, we come back to them. It's a process."

The arts commission's civic design review committee will hear about the plaza proposal at its meeting Monday, October 15.

At least $10 million in private funding would need to be raised for the project. [For more on the plaza, see the Political Notebook column.]

The new design would stand as a tribute to Milk's life and legacy, backers said at the October 4 reception at 3989 17th Street. Milk, the first openly gay elected official in San Francisco and California, was assassinated along with then-mayor George Moscone at City Hall November 27, 1978.

The redesigned plaza is to be built at the entrance to the Castro Muni station. The San Francisco Municipal Transportation Agency is also planning to install a new elevator at the station to make it more accessible.

The escalator leading down to the Castro station would have a concrete awning overhead. Rainbow-colored fluorescent lights would be built into the awning. Inside the Castro station there would be large photos of Milk and photographs of events from his life on display. Quotes from Milk's famed "You Gotta Give 'Em Hope" speech would be etched into the walls.

Above ground it would be possible for people to walk up the top of the awning to a balcony that would overlook Castro and Market — the balcony would be fully accessible to people with disabilities. Significant events from Milk's life would be commemorated on bronze plaques leading up to the balcony.

The surrounding plaza would feature 11 ginkgo trees, which represent the 11 months Milk sat on the Board of Supervisors, according to Erich Burkhart of Perkins Eastman, the architectural firm that won an online vote to redesign the plaza. Ginkgo was chosen because the trees turn yellow in November, which commemorates his November assassination.

The plaza would also include poles with fire-colored light to represent the impromptu candlelight vigil that followed Milk's assassination.

"I'm really excited," Aiello told the B.A.R. "I think the design is really beautiful. I'm looking forward to the next phase when we hear from the city and the community and I also look forward to the day we can honor Harvey Milk's life on the space that bears his name."

Brian Springfield, vice president of the Friends of Harvey Milk Plaza, said that he was also excited by the design.

"After 23-plus years the community is closer than ever to seeing the vision realized," Springfield said. "This is the community's vision, not the Friends' vision."

Springfield was referring to a series of community meetings held earlier this year in which various designs for the plaza were proposed. Community members were invited to offer input and make comments about the various designs. The final design was put together from the input received at those meetings.

Jim James, a 60-year-old gay man, told the B.A.R. that he liked the rainbow-colored lights coming up the escalator.

"I'm worried about homeless people camping out in there," James said. "I don't know what can be done about it. I have a lot of fond memories of events and protests that have gone on in that plaza."

Anna Damiani, who declined to state her age, is a lesbian who uses a wheelchair and is a former staffer for gay former state senator Mark Leno. "I'm excited that we're going to have an attractive gathering place in the Castro," she said. "I'm particularly excited at the idea of increased accessibility."

At one point community activist John Goldsmith, who spearheads a small but vocal movement to preserve the plaza as it is, showed up at the reception wearing a veil and a cowboy hat. After being asked to leave he stood outside ringing a small gong as he chanted "Save Harvey Milk Plaza, honor our elders, respect our past."

"Howard Grant, who designed the current plaza, needs to be honored," Goldsmith told the B.A.R.

Grant, a gay man, is also opposed to the redesign.

Most attendees at the reception ignored Goldsmith.

"I'm very excited about the project," said Shaun Haines, a 40-year-old queer African-American man. "We need a world class memorial to Harvey but this will also be a world class community gathering space. For those who respond to his spirit this space will also serve to unite the four corners of Castro and Market and bring more people into this business corridor."

Terry Beswick, 59, is a gay man and the executive director of the GLBT Historical Society.

"I think it's exciting that we have yet another significant opportunity to honor the memory of Harvey Milk," Beswick said. "The historical society looks forward to participating in the review of the design. We're working to establish a new world class museum of LGBTQ history and culture and we're excited about making this new plaza serve as the museum's foyer."