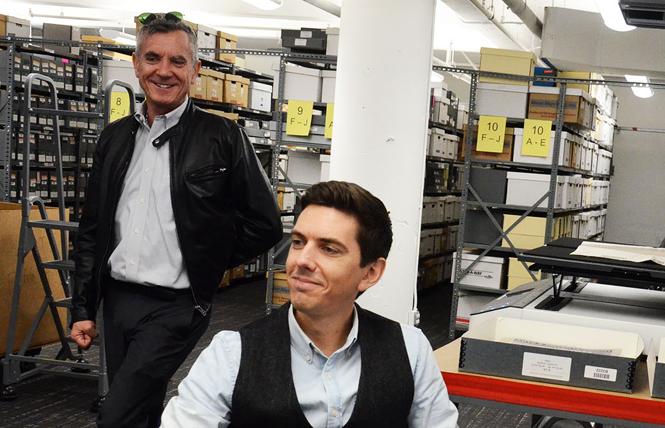 A digitization project to make archival issues of the Bay Area Reporter accessible online has wrapped up.

Soon every issue of the LGBT newspaper based in San Francisco published between April 1, 1971 and August 5, 2005 will be available via two internet databases. The project was overseen by the GLBT Historical Society and funded by $68,000 in grants from the Bob Ross Foundation, named after the B.A.R.'s founding publisher who died in 2003.

"This project is extremely important as it will preserve the history of our movement," stated former B.A.R. publisher Thomas E. Horn, who is president of the Bob Ross Foundation. "Journalists rightly say that newspapers are the first draft of history. And this project will preserve the first draft of the gay movement in San Francisco from 1971 for students, academics, historians or some young boy or girl in some rural area just trying to tap into our history."

Project archivist Bill Levay, hired by the nonprofit LGBT historic preservation group, worked with volunteers over the last two years to manually digitize the more than 1,500 issues of the B.A.R. — more than 77,000 individual pages total — and then make them searchable by keyword using optical character recognition technology.

"Having the entire run of the newspaper available at one's fingertips will open up new research opportunities for both casual readers and professional researchers," noted Mark Sawchuk, a member of the nonprofit's communications working group, in the society's October newsletter.

Until recently, researchers and others who wanted to read old issues of the B.A.R. either had to make an appointment to visit the GLBT Historical Society's archives or visit the San Francisco Public Library's microfilm collection at the main library.

Now, entire issues of the B.A.R., the country's oldest continually publishing LGBT newspaper, can be downloaded via the Internet Archive, which is based in San Francisco, at https://archive.org/details/bayareareporter&tab=collection. It is sortable by date and can also be searched using keywords.

The other online repository is housed on the California Digital Newspaper Collection website, which is overseen by UC Riverside. On the main page of the site — https://cdnc.ucr.edu/cgi-bin/cdnc — type in "Bay Area Reporter" in the search prompt to pull up the archived issues. The digital collection can then be sorted by date as well as searched using keywords.

"It is very important because it provides anybody with an internet connection access to the majority of our archives," said B.A.R. publisher Michael Yamashita, who is now the sole owner of the paper.

The B.A.R. is now working to make its issues from August 12, 2005 through the present day also available online via the two databases. Those issues had been archived on the paper's former website, but that database was disabled this spring when the B.A.R. switched website hosting companies.

"The plan is to archive them," Yamashita said.

Issues of the B.A.R. dating from June 3, 2010 to the present can be brought up through the website Issuu. To access that database, click on the tab "Download Current Issue" on the top of the main page at ebar.com. It will bring up a separate window with downloadable editions of the weekly paper going back eight years.

Most articles that ran in the B.A.R. since August 2005 can be found by using Google search. Either a link to the article will come up or a cached version of the story is available.

As for the search function on the B.A.R.'s own website, it should bring up stories that have run since April of this year. The website host is working to improve the search capability so that older articles dating back to 2005 are also easily found and accessed via the search page on ebar.com.

"The search engine is being fixed. It is what it is right now," said Yamashita.

The GLBT Historical Society will celebrate the completion of its involvement in making archival issues of the B.A.R. available online at its annual gala Friday, October 5, where it will also honor Horn.

For more information about the B.A.R. archive project, visit http://www.glbthistory.org/bar/.